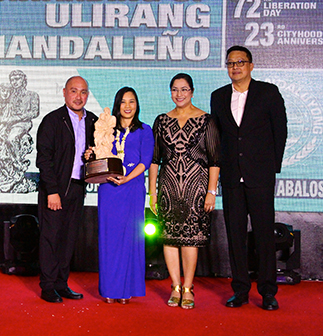 In awarding ceremonies held on February 18, 2017, the local government of Mandaluyong recognized Lopez-Bautista as one of its outstanding citizens who has shown exemplary performance in her field and has contributed to the development of the city.

A strong advocate and prime mover of educational media in the Philippines, Lopez-Bautista utilizes media and technologies and professional development programs for teachers and education leaders to help improve the lives of the Filipino through relevant and quality education.

For the past 18 years, KCFI, which she founded, has been reaching millions of Filipino learners from Batanes to Tawi-Tawi.

These initiatives were also able to help public schools in Mandaluyong, where more than a dozen of them have been engaged and connected to the Knowledge Channel education system.

Lopez-Bautista has been a recipient of similar prestigious awards, including the CEO Excel Award from the International Association of Business Communicators Philippines, the Parangal Lingkod Sambayanan Award from the Ateneo de Manila University and the La Sallian Achievement Award for Distance Learning from the De La Salle Alumni Association. (Story/Photos by: Michael Ramos)