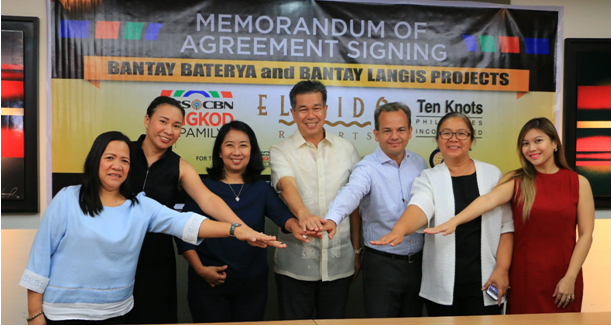 The partnership began in 2007 when Ten Knots committed to properly dispose of and recycle its used industrial oil by donating it to Bantay Kalikasan’s Bantay Langis project. The renewed partnership now also includes the donation of used lead acid batteries.

“We are grateful for the partnership with Ten Knots, we are thankful for companies as big as them who understand the value of sustainability, environmental protection and stewardship. It is our privilege to work with institutions like them that implement programs and projects to take care of the Earth that we live in,” said Jen Santos, Bantay Kalikasan program director.

“It’s timely that we renew our partnership as we, Ten Knots, have now evolved from being a resort owner and operator to a township developer…,” said Javier Hernandez, chairman of the Ten Knots Group, which runs four resorts in Palawan. He added that the continuation of their partnership with ALKFI is because of their similar concerns about preserving the environment.

The used oil and lead acid batteries collected from Ten Knots properties will help support the environmental advocacies of Bantay Kalikasan and its 14 assisted communities all over the country.(Story/Photos by: Maureen San Antonio)