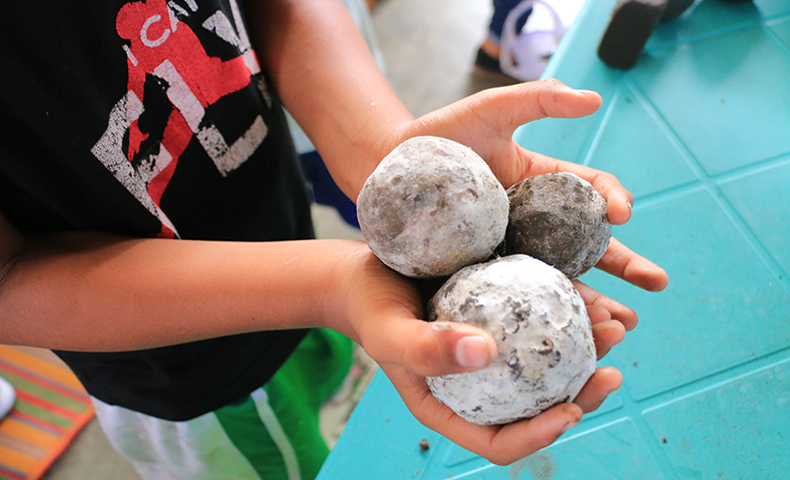 A training participant shows off samples of fermented Mabuhay ballsResidents of several barangays in Pasay City as well as volunteers and representatives from different schools and private institutions participated in the training for the production of Mabuhay balls.

Mabuhay balls or bokashi balls production, a technology that came from Japan, uses beneficial microorganisms to break down toxins. “Bokashi” is a term that means “fermented organic matter.”

Funded by LRMC, the expertise for making bokashi balls was shared by the Asian Social Institute (ASI), which also provided the raw materials. These balls will be released into Estero de Tripa de Galina, LRMC’s adopt edestero.

According to ASI agriculture specialist Joemedes Arienda, a Mabuhay ball the size of a tennis ball can help neutralize 1,000 liters of toxic water.

“These balls are composed of clay soil, effective microorganisms and Mabuhay mix—a mix composed of rice, sugar and salt, to name a few. The balls should be fermented and stored anaerobically for seven days and air-dried in room temperature for another seven days,” Arienda explained.

Mabuhay balls have been proven to help clean waterways like the Estero de Santibañez in Paco, Manila, one of the estuaries successfully rehabilitated by KBPIP.

The communities produced close to 1,000 Mabuhay balls, which LRMC will purchase for P15 each.(Story/Photos by: Althea Cahayag)