Participating in the SAR drill were government agencies and private stakeholders operating in El Nido, Palawan. INAEC has been in El Nido for over 10 years, servicing the requirements of oil and gas companies.

Tianchon said the SAR drill was meant to evaluate the compatibility of the equipment and procedures of the various stakeholders led by the Western Command of the Armed Forces of the Philippines (AFP) and the El Nido local government, in particular the Municipal Disaster Risk Reduction and Management Council’s ENERU or El Nido Emergency Response Unit.

INAEC president Benjamin R. Lopez welcomed the undertaking, saying it was important to be in a “continued state of readiness,” and underscored INAEC’s “passion for safety.”

The SAR drill consisted of two scenarios: a boat capsizing with 30 passengers and an aircraft landing in the water with two passengers. Capt. Jonahs Liwag and Capt. Richard Bringino joined both exercises flying INAEC’s helicopter while INAEC radio communications operator Gerald Marasigan, who is based in El Nido, monitored the airwaves and relayed information to and from all parties in real time.

At the end-of-day assessment, INAEC general manager Dexter Ampong commended all participants for completing the exercise and noted areas for improvement for succeeding joint drills. Lakkani Hidalgo, security manager of Ayala Land Inc. subsidiary Ten Knots Group which owns several resorts as well as the El Nido Airport, said the speedboat used by Ten Knots got to the search area faster because of an almost-zero start-up time compared to air assets.

Ensign Harvey Marmol of the Philippine Coast Guard said the team’s performance exceeded initial expectations. He believed the lessons learned would go a long way in improving the interoperability of communication and procedures among the public and private stakeholders of El Nido. Lt. Col. Arthur Laylo of the AFP Western Command congratulated JTF Malampaya for successfully showing teamwork and collectivism, as it drew the active participation of all the stakeholders.

El Nido administrator RJ dela Calzada assured the participants that ENERU is properly equipped and trained to address emergencies, and hopes the inter-agency cooperation will continue going forward to meet contingencies, including the threat of terrorism.

Tianchon quoted German philosopher Hannah Arendt who said in an interview: “The main characteristic of any event is that it has not been foreseen. We don’t know the future but everybody acts into the future. Nobody knows what he is doing because the future is being done by a ‘we’ and not an ‘I.’ Only if I were the only one acting could I foretell the consequences of what I’m doing. What actually happens is entirely contingent, and contingency is indeed one of the biggest factors in all history.” Thus, he stressed the importance of training multiple stakeholders together. (Story/Photos by: Carla Paras-Sison) 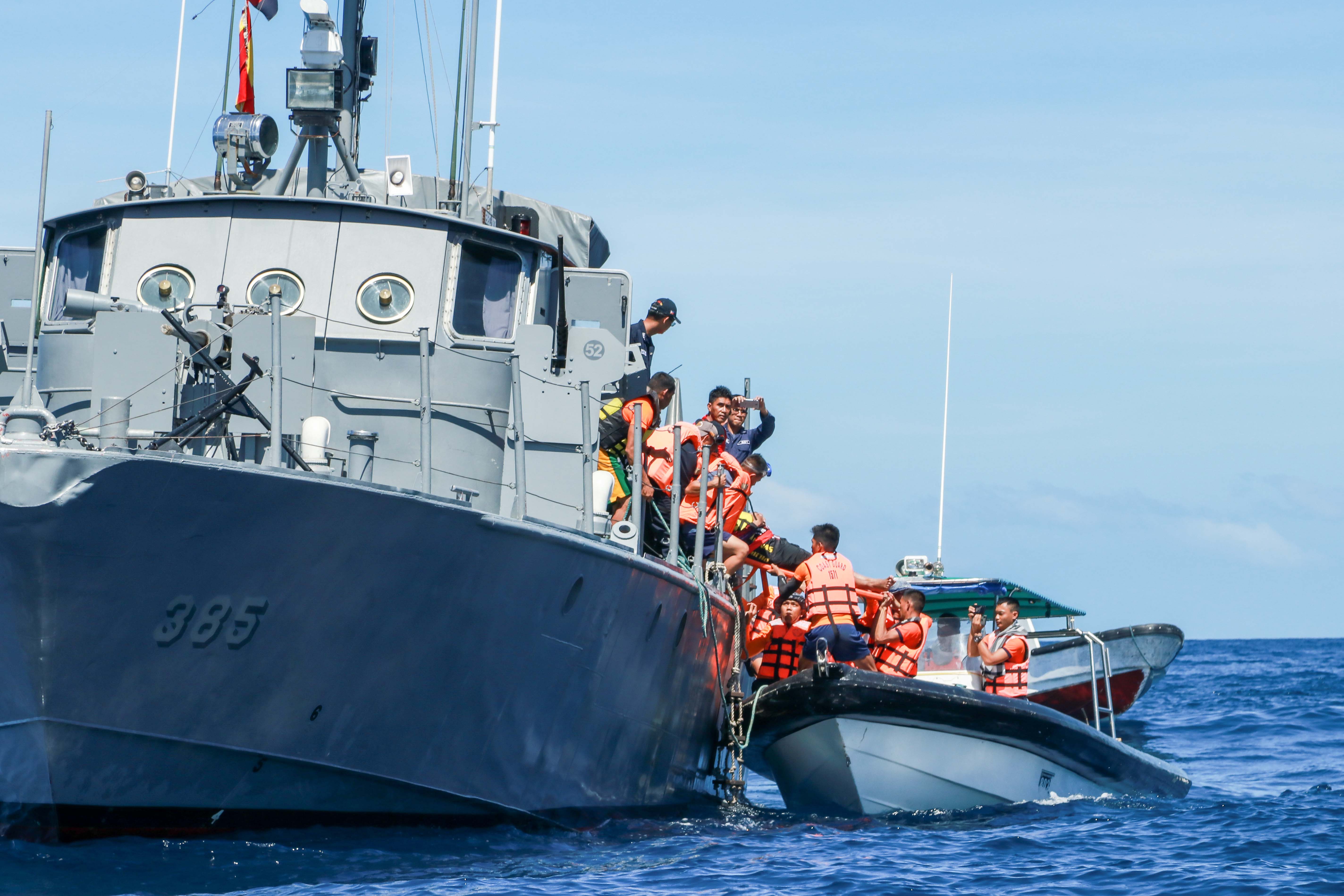 In the first scenario, volunteers aboard a speedboat of Ten Knots transfer a ‘victim’ to a navy vessel 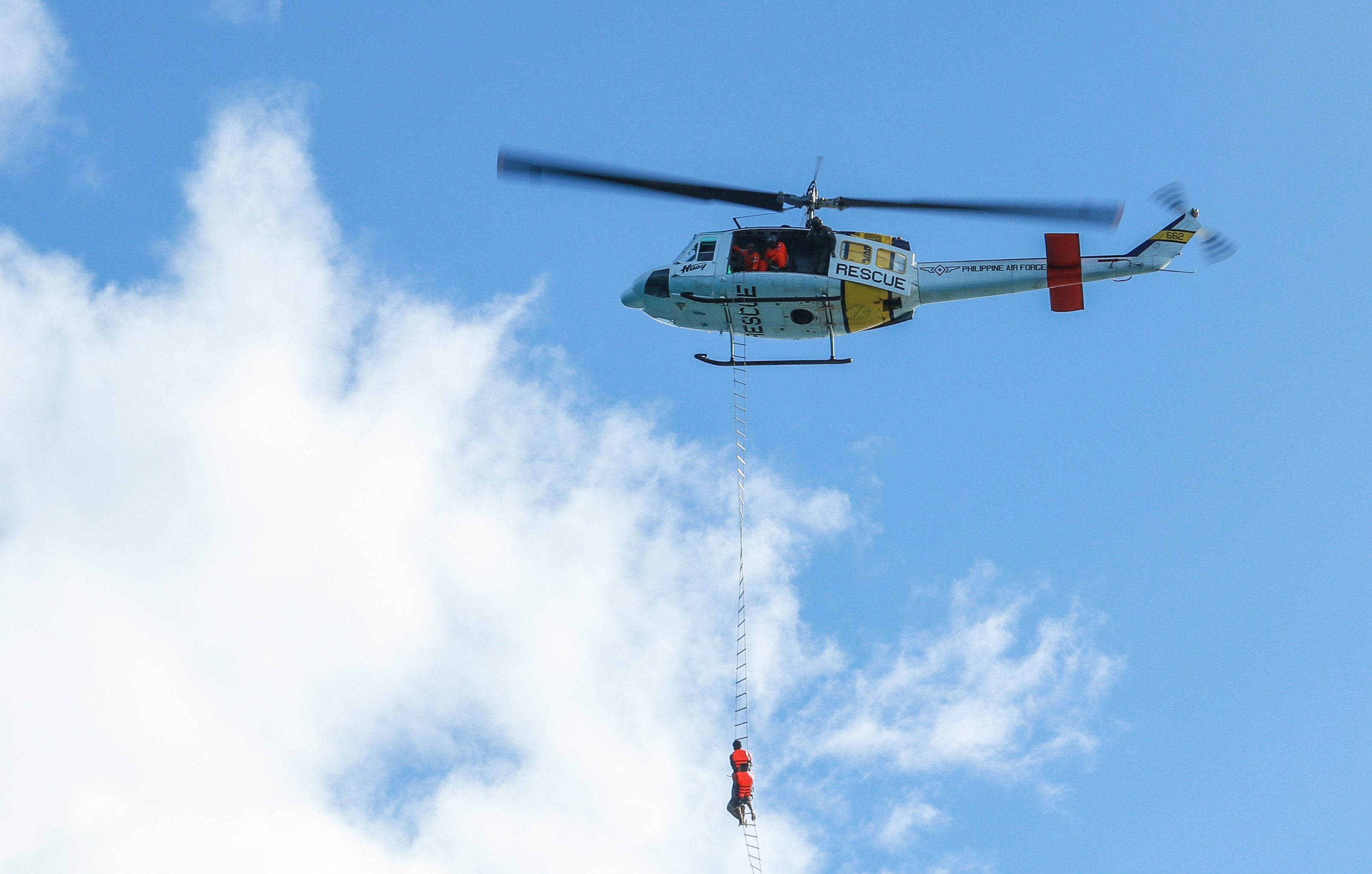 In the second scenario (inset), ‘victims’ hold fast to a rope ladder borne by a PAF unit