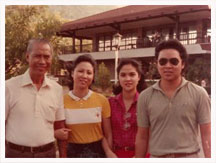 Pearl Catahan: A 2nd generation LopezLOPEZ Group comptroller Pearl R. Catahan of First Philippine Holdings Corporation is a second-generation Lopez staff member. Her dad, Trinidad C. Rayos del Sol, was accounting manager of Meralco when he retired in 1968 after serving the company for 30 years. “I have very fond memories of walking to Meralco after school in nearby St. Theresa’s College in San Marcelino with my two siblings to wait for our father to finish work. At that time, there were very few women in Meralco, and in fact in my dad’s department, they were all men. He had to accompany my sisters and me every time we went to the restroom because it was a men’s room and he did not want us to bother anybody,” Catahan recalls.

The Old Man [Eugenio H. Lopez Sr.] indeed looked after his employees’ welfare and nobody can beat his generosity! Catahan says the Meralco Christmas party was something the employees and their families looked forward to. They had lots of food, fun, and surprises for the whole family. Everyone was excited about the raffle that got bigger and bigger every year. Who wouldn’t be! There was a time the grand prize was a house and lot and, at another time, P100,000. Winning the grand prize can really be a lifechanging experience!

She actually did not expect to join the Lopez Group because her heart was set on becoming a partner in SyCip, Gorres, Velayo & Company (SGV & Co.), the country’s premier accounting firm even at that time. But at her dad’s prodding, she changed her career path.

“A friend of my dad from Meralco told him that First Philippine Holdings Corporation needed someone in MIS, a new department they were setting up in the Comptrollership Group that will be tasked to monitor the performance of the increasing number of subsidiaries of the company, then named Meralco Securities Corporation. I really did not want to go because I was already in SGV at that time and my career objective was really to become a partner in the firm. But my dad was so persistent. I told him the Lopezes were no longer in First Holdings and so it was useless to join the company. But he told me, ‘The Lopezes will be back.’ He was so sure they would come back,” narrates Catahan.

She acceded to her father’s wishes and worked for three years in First Holdings. She took a break to take graduate studies and earn a Master in Business Management from the Asian Institute of Management. Although the company did not hold her post for her, she was fortunate to find a vacancy when she completed her studies in two years and thus rejoined the company in 1983.

When her father’s word came to pass in 1986 as the Lopez family returned to rehabilitate and rebuild their businesses, Catahan was all smiles. There was pride at the foresight of her father, respect for his confidence and faith in the Lopez family, and a fuller understanding of his loyalty to the Lopez tradition. The genuine concern for employee welfare and wellness demonstrated by Eugenio H. Lopez Sr. during his incumbency in Meralco engendered a great desire in officers and staff members to reciprocate such generosity of spirit. So much so that Rayos del Sol never doubted that his daughter “ought to” work for the Lopez Group.

Although Catahan was at first reluctant to join the group, she did not regret her decision to comply with her father’s wishes. She has herself experienced what her father experienced when he was in Meralco: being treated not only as a partner in the success of the organization, but also as if you were part of the family. This kapamilya spirit has made her stay through good times and bad. Her father could not be prouder.