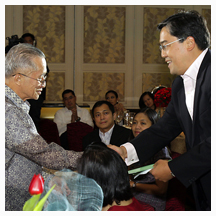 Ricky TantoncoRicky Tantoco, president and COO of EDC and First Gas, believes that an entrepreneur is not just someone who stakes out on his own and sets up a venture, but that it is also possible to be an entrepreneur in the context of a corporation.

His experience working with the Lopez group of companies since 1995 has shown this belief to be true time and time again. As a former management consultant from New York tasked to lead the group in bagging million dollar deals, one would think that Tantoco had been handed everything on a silver platter.

In fact, he has had to work hard for everything he achieved with the group. He didn't even have a desk on his first day in office. While he was not expecting a ticker tape parade, he also didn't expect a ‘subdued welcome’. “During my first day with the group, I was in the office by 8 am and by 11 am one had seen me. I was given a small conference room that would sit four people tightly. Practically no one knew why I was here,” he recalls.

At the time, the group was thinking of getting back into power in a major way. Tantoco was given an objective: to get a US$ 1 Billion Sta. Rita project done ASAP – with limited capital and hardly any internal team.

Bucking tremendous odds, Tantoco worked with a team composed mostly of bankers, consultants and lawyers and promptly plunged into work.

“Fortunately, the team we had then was top drawer. Never in my career have I seen such a gathering of talent. We got going; everyone was young, passionate, hardworking and incredibly skilled. We pushed, pushed and pushed and got the deal to close on the third quarter of 1997,” Tantoco relates.

FIRST ASPECT OF ENTREPRENEURSHIP: VERY DEEP KNOWLEDGE OF HIS BUSINESS

Tantoco shares three aspects of being an entrepreneur. The first is: An entrepreneur is someone with a very deep knowledge of his business and within that context, creates an opportunity and eliminates risk.

“You can’t be an entrepreneur if you’re just guessing,” he states. “You have to be better than your competition, smart with your suppliers and compelling to your customer,” he adds.

He recalls the time when they had to negotiate a US$ 20 Billion gas contract with Shell and Occidental Petroleum. “I had never done anything like it before, so I had to admit this weakness and inexperience and looked at places where I could get expertise. I found it at Oxford’s and asked my bosses if they would allow me to enroll in the course. Without a moment’s hesitation, they said “Go do it.”

Tantoco shares that the company had no qualms of spending for something that will help meet its objectives, such as the time he enrolled at Oxford”s College of Petroleum Studies, one of the world’s top institutions of learning.

The result of the negotiations went beyond the tream's expectations. “Throughout the negotiations, I believe we were underestimated. It was absolutely wonderful,” Tantoco muses.

The contract with Shell was eventually closed at a value of US$ 12 Billion – from the initial offer of US$ 20 Billion. This generated quite a substantial savings for the company.

“If you asked me before the negotiations commenced if that was possible, I would have said no,” Tantoco reveals.

The success of the negotiations with Shell was a product of rigorous preparation by Tantoco and his team. He says that for every hour of negotiations, they spent from six to eight hours preparing.

“We had all issues list catalogued on a table. Every member of the team knew every moving part, the non-negotiables and items we could trade and everyone worked through that one script. We debated and argued internally, even over the weekends, for 11 months. We started with 200 issues, and eventually whittled these down. It's amazing what a choesive team can do” he states.

SECOND ASPECT OF ENTREPRENEURSHIP: COMMITMENT TO GET THE JOB DONE

The second aspect of entrepreneurship is: You need to be committed to do what it takes to get the job done. “’Good enough’ is never acceptable,” he shares.

That is why in every venture he has undertaken, he endeavored to generate commitment from his team and staff. “Without commitment and buy in, you will fail,” he says. How does he do it?

“You set an example. You sacrifice, you push personal limits if needed.” he states.

His appointment as COO of Manila North Tollways Corporation from 2001 to 2005, a former Lopez Group company was one of his toughest tasks, as he had to deal not with just turning the company around financially, but reprogramming its culture altogether.

“Frankly speaking, I was shocked at what I encountered those first few days. There was totally no ‘owner’s care.’ It seemed that the people there were only after their paycheck. I could not believe that officers and managers played computer games during office hours,” he hesitantly relates.

It was obvious that something drastic had to be done to bring the company up to par with top corporate standards.

“It was not easy, but we managed to transform the culture. The path I chose was to get commitment through personal sacrifice so I started to call meetings late at night and on Saturdays and Sundays on purpose. We banned the words “in progress” when people reported on critical and urgent matters. Everyone had to deliver or was put to task; fudging results, faking progress was no longer acceptable. After some time, it became about collective success – people bought in and wanted the company to take off. I felt it change and at that point I knew we would reach the finish line,” Tantoco recalls.

THIRD ASPECT OF ENTREPRENEURSHIP: CARE FOR THE COMPANY AS MUCH AS HIS PERSONAL RESOURCES

The third aspect of being an entrepreneur, according to Tantoco, is that: An entrepreneur cares about the company as much as, if not more than, his personal resources.

In 2009, Tantoco was assigned by the group to head EDC, the country’s largest geothermal producer, which the group had acquired in 2007. Lest he be accused of being preach-y, Tantoco was hesitant to reveal the extent of what he has had to do to bring EDC to the next level. But he reluctantly shared an instance when his patience was tested, since he realized that the account would make a good example.

“One of our facilities in Mt. Apo in Mindanao got hit by a landslide on a Friday evening. I got initial texts on Saturday that were completely unsatisfactory. I was told people would meet on the recovery plan ‘next week.’ I asked myself: given this is foregone revenues of over 3 million pesos a day, why is it okay to even waste an hour? So again we called for a meeting on Sunday in Manila with a conference call to Mt. Apo. By mid afternoon we had a plan, but more importantly, a loud message was delivered: GET MOVING NOW!," Tantoco mused.

The recovery was done in 20 days versus the exact previous incident that took over 30 days to complete, allowing the company to generate over 30 million in revenues.

But the work of transforming EDC has not been all blood and gore. Tantoco has also made it a practice to talk to people directly, especially those in the field, to get their pulse.

“We now conduct Mancom meetings on-site. The management team makes sure that the staff knows where the company is going, what is important to management,” he says.

“My after dinner activity every time I spend the night at the sites is usually a ‘skip meeting’ where I sit down with the rank and file without their direct bosses, just me and them. I listen to their issues, ask a lot of questions and allow all of them to get to know me too," he relates. Through these skip meetings Tantoco says that he has gotten valuable insights on what needs attention.

Despite the challenges, the peaks and valleys of work, this management hotshot who agreed in 1995 to take a significant pay cut from what he received as management consultant in New York to join the Lopez group doesn't have any regrets.

“Work is phenomenally exciting, and I like the people I work with. There’s no monetary equivalent to that,” he reveals.