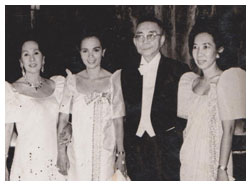 Mitos Santisteban: Going where the work takes herMitos Santisteban started working for the Lopezes in 1964 as the secretary of Eugenio Lopez Jr. By the time she retired in 2009, she was the president of ABS-CBN Foundation Inc. (AFI)- US. Today, she continues to serve as a consultant for Lopez Group Foundation Inc.

Although based in the US, she never abandoned the Lopez value of nationalism, in which she celebrates the good qualities of the Filipino people: hospitality, respect for others and the bayanihan spirit.

“I was hired by Eugenio ‘Geny’ Lopez Jr. as one of his two secretaries,” she says. “Geny shared a suite with his father, Eugenio Lopez Sr., so although I worked for Geny, there were some occasions when we would do staff work for the ‘Old Man.’” Working for the elder Lopez exposed Santisteban to love of country because she saw how involved Don Eugenio was in local and national politics.

“We would join the family in their summer home in Baguio or at their flat in Hong Kong,” she recalls. “When eating, he would put food in front of you. You wouldn’t feel like a secretary, you would feel like a guest in his house. They respect you as a person. They were not at all snobbish.”

When Geny was incarcerated during martial law, Santisteban became an activist. She and other Lopez employees fought against the Marcos regime, especially for the injustice of the false accusations hurled against Geny. “They robbed Geny of five years of his productive life,” adds Santisteban.

“We mimeographed clippings and distributed them, although people couldn’t know what we were doing,” she says. In fact, Santisteban was so deep in the anti-Marcos movement and so loyal to the Lopezes that she helped arrange Geny’s escape to the US. Eventually, she would be branded by the Marcos regime as a “subversive.” Fearing for her safety and liberty, she joined her boss in exile in the US.

Santisteban was soon working for a food company that the Lopezes set up in the States. “I found myself selling Filipino food to the US Naval and Army commissaries,” she says.

When Geny returned to the Philippines and got back ABS-CBN, he launched The Filipino Channel (TFC). He needed someone to
jumpstart the fledgling company. Santisteban was hired as an account executive for ad sales of TFC. She was later promoted to manager, and then senior manager for community relations. In due time, she became president of ABS-CBN Foundation Inc.-US, of which she is one of the incorporators. “Because I knew a lot of people in the US,” she shares.

Santisteban continued to find time to immerse herself in mainstream community work as an active member of the Peace and Justice Committee of the Archdiocese of San Francisco. She also served for four years in the Mental Health Board of the county of San Mateorepresenting the public interest of the Filipino community. In 2007, she was honored as one of the “100 Most Influential Filipino Women in the United States” by the Filipina Women’s Network.

This longtime Lopez employee believes that the Lopez values have been strengthened even after the passing away of Don Eugenio and Geny.

“They are not arrogant or snobbish. Even the second and third generations are approachable,” she says.

Santisteban is particularly touched that members of the family are actively involved in causes. She singles out Gina Lopez and her involvement with the environment, Rina Lopez-Bautista and her education projects, Geni Psinakis and her work with the urban poor in Smokey Mountain and Geni’s brother Mike, who volunteered in Central America to care for endangered turtles and continues to work once weekly at The Marine Mammal Center in Sausalito, California. The center rescues and rehabilitates injured sea lions, elephant seals and other marine mammals.

“They (the Lopezes) are on the right track by exposing the third generation and their employees to the Lopez values,” she muses. 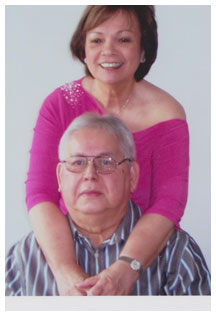