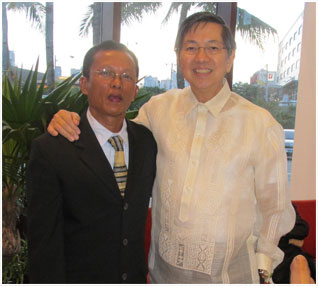 Lopez Holdings Messenger Bactol with Amb. Manuel Lopez
Stories of the Lopezes’ generosity and care for employees are abundant and well-known. Trusted executives and longtimers attest to that. But what is more remarkable is that such treatment extends to all employees, including the rank and file.

Mario Bactol, who started as an elevator attendant employed by Servicio Filipino, an agency servicing Meralco, is living and breathing proof. In his 26 years with the Lopez Group, 51-year-old Bactol has loads of stories about the Lopez generosity.

“Since no work, no pay ako, pumapasok ako kahit may coup, kahit may bagyo (Since I don’t get paid if I don’t work, I report for work even when there are coups d’ etat, even during typhoons),” he narrates.

It was in one of these instances when Amb. Manuel M. Lopez, then Meralco’s president, noticed him.

Wanting to please his employer, the industrious and perky Bactol went to great lengths to be of service. He took it upon himself to catch cockroaches to feed Amb. Lopez’s fish, an arowana.

“One time, I gave him around 200 cockroaches. He wanted to pay me but I refused. He later gave me a bug catcher,” Bactol reveals in Filipino.

Bactol continued to catch cockroaches for Amb. Lopez’s fish, and the ambassador would continually insist to pay him, but Bactol always refused. After one of his refusals, Amb. Lopez gave Bactol P3,000 the next day.

“He said it was for my uniform, so I went to the tailor and had the uniform made. When it was done, I still had around P300. I returned it to him. He accepted it, looking surprised but just nodded,” Bactol says.

Once during the Christmas season, Amb. Lopez gave Bactol a bag full of old clothes. He washed the clothes and wore them the next week, proudly showing them to Amb. Lopez while they were waiting for the elevator.

“Sabi ko sa kanya, ‘Sir, eto po yung binigay niyo sa akin na damit (I told him, ‘Sir, these were the clothes you gave me).’ He made me turn around and said ‘Kasya pala ha (They fit nicely),’” Bactol recalls.

One day, the ambassador’s personal guard told Bactol that the boss wanted to see him later that day.

At that time, 37-year-old Bactol had already been with Servicio Filipino for 11 years, all of which were spent at Meralco. And even if he was not a regular employee, he was quite content because the people in Meralco were good to him.

But Meralco was on “freeze hiring” status then, so Bactol was shipped to Benpres (now Lopez Holdings) where he has been for the past 15 years—no longer an elevator boy, but a messenger.

“Mabait lahat ang mga Lopez. Generous. Pag may party, aabutan ka nila ng pang-meryenda (The Lopezes are good people. They are all generous. When there is a party they would give me money for snacks,” Bactol reveals.

“Napaka-humble nila, mas magarbo pa ibang empleyado. Mahal nila ang mga empleyado nila (They are so humble, some employees are more ostentatious than them. They love their employees),” he adds.

Bactol has known hard work since his father died when he was 11 years old. He did odd jobs in his hometown of Kolambugan, Lanao del Norte to help his mother raise his six siblings. After finishing second-year high school, he went to Manila to seek greener pastures.

Good thing he heeded his cousin’s advice for now, Bactol has 26 years of working for the Lopez Group tucked under his belt, and with the treatment he has received, no wonder he wishes to retire as a Lopez employee.

“Wala na akong balak lumipat pa kasi lahat ng empleyado dito mabait sa akin. Gusto ko silang pagsilbihan hangga’t kaya ko. Malaki ang utang na loob ko sa mga Lopez (I have no plans of moving to another company because the employees have been so good to me. I want to serve them until I can. I am indebted to the Lopez family,” Bactol shares.

For new employees, Bactol has this to say: “Gawa lang sila ng maganda sa trabaho, kahit anong trabaho pa. Ako ganun, kahit pagod ako, kahit lumampas sa oras (Just work hard and do well in whatever job you do. I myself work even if I am already tired, even beyond office hours),” he reveals.

This is because Bactol believes that doing a job well will always pay off in the end.