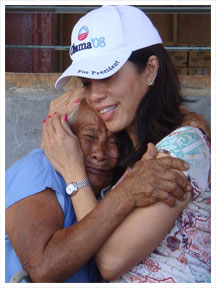 Gina Lopez: Going for the big goalsRegina Paz Lao Lopez is the managing director of ABS-CBN Foundation Inc., chairman emeritus of the Southeast Asian Foundation for Children’s Television and a trustee of Children’s Hour. Last year, she was appointed by Pres. Aquino to head the Pasig River Rehabilitation Commission. Lopez attended Assumption College and later took up liberal arts at the Newton College of the Sacred Heart in Massachusetts. She has two sons, Benjamin and Roberto.

Gina Lopez is not one to set goals that are very easy to achieve. On the contrary, what appeals to her are ambitious, difficult projects that promise to make a significant impact on the lives of Filipinos.

For the eldest daughter of Eugenio “Geny” Lopez Jr., the bigger the goal, the better. She spearheaded efforts, for example, to get as many runners as possible to participate in the Run for Pasig and raise funds for the rehabilitation of the Pasig River. Not only was the group able to raise millions of pesos for the worthy cause, the runners together were also able to make the Guinness Book of Records for having the most participants in a fun run at over 120,000 individuals.

In August, Lopez traveled to the US to seek support for the cleanup project. While she is chiefly raising money for the river’s rehabilitation—she describes it as her “most important task—Lopez is also spearheading several ecotourism projects in Palawan to help the region’s indigenous people. “They live in the middle of splendor but are very poor,” she says.

The trait of committing her time, energy and resources to landmark projects is something she inherited from the long line of Lopezes that has contributed to making the Lopez Group what it is today—a sprawling conglomerate with interests in businesses that serve the Filipino people.

“My father always liked doing big things when he was alive. He really had guts. That is something that I got from my dad, plus the will and determination to see things through. Arrogance has nothing to do with it. It just comes from a desire to push yourself to do something worthwhile,” says Lopez.

This desire to do something new and pioneering has been part of the Lopez Group’s DNA since its founding in 1928. It is this spirit that drove the Group to undertake a lot of firsts— the first Filipino airline, first Filipino group to take over a major American company and, more recently, the first broadcast company to cater to Filipino communities all over the world.

Being pioneering comes with a lot of risks, Lopez says, because the Group finds itself in a new sector that no other group has gone before. Thus, mistakes cannot be avoided and there is always the chance that the venture will not end up being successful.

But those who are willing to take the big risks are rewarded, which is why the Group continues to look for new areas to venture into, guided by the desire to provide Filipinos what they want and need.

The pioneering spirit is also why Lopez takes on big challenges. She explains that given her expertise and access to resources, giving her best to achieve major goals for the Philippines is but the right thing to do. And doing the right thing is one of the hallmarks of the Lopez family and the Lopez Group.

Thus, no matter the challenges that will come her way, Lopez—and the Lopez Group—will not waver.