Giving back to the Community: CSR Magna Carta contest winners 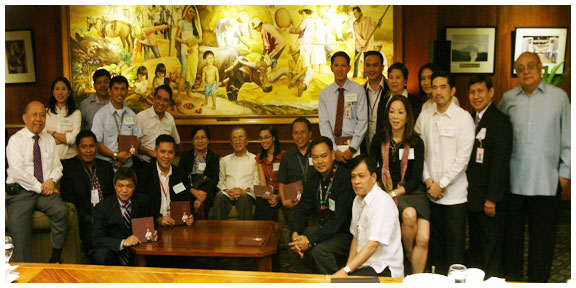 Lopez CSR Magna Carta WinnersThey climb mountains to bring school supplies to impoverished children, organize football games, conduct free workshops and provide cash allowance to students—these are just some of the good deeds that Lopez Group employees do on their personal time to make the world a better place.
At the awarding ceremony of the Giving Back to the Community CSR Magna Carta contest on September 21, chief mentor Oscar M. Lopez (OML) congratulated the 12 winners for “being one with the Group’s commitment to community service and social justice.”
The chairman emeritus emphasized that personal social responsibility or PSR is as important as corporate social responsibility (CSR) and that the Lopez Group is committed to do both. He said: “I am proud of what you are all doing on your time for your communities.”

Marco AmuraoMarco Amurao is the community relations officer of First Philippine Industrial Park. A native of Tanauan, he makes use of his extensive Red Cross training to help the youth of his hometown in Batangas. He also regularly conducts values and leadership trainings.


Glenn DasmariñasGleendo Dasmariñas is Bayan’s head of Customer Care for Central and Western Visayas. A member of Junior Chamber International since 1989, he has been with Bayan for 14 years and conducting leadership training for Jaycees and non-Jaycee members for more than 15. His passion is coaching young people to become better citizens and leaders. In 2009, he was awarded as the Most Outstanding Trainer in Asia-Pacific.


Macky De LimaUltramarathon runner Macky de Lima uses running to raise funds for schools in remote barangays in his native Bicol, an endeavor in which he is joined by his Ateneo de Naga HS class. “By visiting these barangays and showing to the community our help and kindness, we hope to inspire the school children to study more and to make a difference,” the senior manager of the Treasury and Strategic Business Planning Department of First Balfour said.

Abelardo GaitanaThrough his “Brewdershood” group, Abelardo Gaitana regularly conducts mission work in Bulacan. For the past two years, he has taken part in feeding programs and helped construct libraries and distribute school supplies. Gaitana has been with Bayan for 16 years and currently serves as head of its GIS Administration unit. A civil engineer, he was previously affiliated with ICC Telecoms.

Alfred GoSkyCable safety officer Alfredo Go has been commended for his perfect attendance in Walk the Talk, and is a two-time Lopez Achievement Awards individual nominee for his efforts to combat illegal connection. He has utilized his ESH experience to conduct safety seminars and assist in relief operation drives. He also took part in Knowledge Channel Foundation Inc.’s Teacher for a Day program.


Robert GuazoRobert Guazo, together with Byaheng Kalikasan or BAKAS, an outdoor group composed of 13 of his Energy Development Corporation (EDC) co-employees, has conducted 10 outreach programs since 2009. Guazo joined EDC as an instrument design engineer in 2004. He joined the contest with the hope of securing funds to buy soccer shoes for his wards on the BayaniJuan youth team.

Jocelyn LlamasBilling specialist Jocelyn Llamas of Bayan takes time to actively participate in her religious community and, in November 2008, started participating and working in the Kansurok community in Marinduque along with her church mates in Capitol City Baptist Church. She started working in Bayan as an OJT under the Business Support Group of Retail Sales and was immediately hired in 2002 after her graduation.

Rei MedranoRei Medrano joined EDC as a nursery supervisor in 1984 and is currently the manager of the company’s CSR Department. He was actually nominated by a colleague, who said that “if there is one person in the company who truly understands and practices the value of true giving it would be by the name of this small man with the biggest heart….” Among others, he is credited with empowering local farmers to venture into sweet corn trading and own their own livelihood.
Barney MolinaBarney Molina, TV Entertainment Head for RNG of ABS-CBN Bacolod, has brought in 10 Golden Dove Awards, three Golden Dove nominations and two Catholic Mass Media Awards in 18 years of production leadership. He utilizes media to help boost academic excellence in his hometown, Bacolod City. For the last five years, he has produced “Quiz High” through MagTV na, Amiga, a concept he plans to export to neighboring Iloilo.

Jesus Felipe SubingsubingJesus Felipe Subingsubing is a plant operation engineer/assistant shift supervisor of EDC’s Mahangdong Power Plant Operations Department in Leyte. The electronics and communications engineer, together with his officemates, helps his community by organizing soccer tournaments and clinics for children aged 10 years old up to 16 years old through their soccer club called Ormoc Soccer Aficionados.

Raymund SullanoIn 2004, Raymund Sullano started a pabaon program for deserving students in his old high school in Sampaloc. With his family and former classmates, Sullano provides 15 students a monthly allowance for meals and school requirements. He also spearheads a regular gift giving and feeding event with his family during Christmas. Sullano is an environmental/sanitary and civil engineer and is currently AVP for Project Development of First Gen.

The 12 winners received from the chief mentor a grant worth P10,000 each to be used toward their respective causes. Prizes from Adtel Inc. were also raffled off among the contest winners. The 21-inch Baron color TV was won by Amurao, the 14-inch unit by Gaitano, while the Adtel Solar home kit was won by Dasmariñas.