Mrs. Pacita Lopez (center) and her daughter Presy join anti-tyranny activists in San Francisco, begging for the release of Geny Lopez and seeking the withdrawal of U.S. support for the Marcos dictatorship.Every February, we mark the anniversary of the EDSA People Power Revolution. It’s been 26 years since that bloodless revolution brought us out of one-man rule—and, to many, specially of the younger generation, EDSA 1 might be just a distant memory… a part of history. To the Lopez family, however, People Power holds a very special meaning. It marked the restoration of freedom for those of us who suffered at home or lived in exile during the martial law years. It also was a joyful moment specially for my brother Geny, who was unjustly imprisoned by the dictatorship. It was also a time to pick up the pieces of what was left of our late father’s legacy.

But more than a quarter-century later, many of us are asking: Is “People Power” still relevant? It sometimes seems as if we are back to where we were when we threw out the dictatorship. The idealism and feeling of self sacrifice that was at the heart and soul of EDSA 1 seem to have vanished and in its place, a return to corruption and narrow self interests. So, what does EDSA 1 mean for us today and, more importantly, why should we still care?

As someone who left the comforts of a relatively sheltered life to join the activists of the ‘70s, I will have to say that the EDSA Revolution demonstrated the best we could be as a people. My husband, Steve Psinakis, who was not even born in the Philippines, did so much to help our country regain its freedom. The true activists who fought Martial Law know his significant contribution to our country. On a personal matter, my father died in 1975 without seeing my brother Geny, because the dictator reneged on his promise to release him to see my ailing father. Two years later, it was Steve who helped Geny and his cellmate, Serge Osmeña, escape military prison and on to political exile in the US. 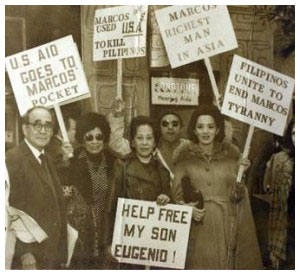 Mrs. Pacita Lopez (center) and her daughter Presy join anti-tyranny activists in San Francisco, begging for the release of Geny Lopez and seeking the withdrawal of U.S. support for the Marcos dictatorship.All the protests and demonstrations, revived in earnest after the assassination of Sen. Ninoy Aquino, came to a head in 1986. In those dark days at a time when no one knew if the dictatorship would violently suppress the expression of People Power, people from all walks of life poured out into the streets, confronted military tanks with flowers and rosaries, and left their fate in the hands of God and the Blessed Mother. It was our generation’s response to two decades of political corruption that saw their basic freedoms curtailed even as the dictatorship and its cronies flourished. The People Power revolution showed the world how tyranny can be overthrown by a people united to protect themselves and their children from continued oppression. And indeed the fall of the Berlin Wall and communist regimes in Eastern Europe and even the Soviet Union happened likely because we showed the world a democratic revolution was possible.

Twenty-six years later, there are those who would like to bury our People Power revolution in the dustbin of history. It pains me to hear some even have the temerity to say that EDSA 1 was just mob rule. But I think it is still very much alive, very much relevant to our lives. There are unfinished tasks that today’s generation must take on. It was, for instance, painful for many of us to endure another lost decade of corruption as venal as the dictatorship we overthrew in EDSA. But we get solace that a renewed sense of idealism among our people led to the election of a new administration determined to banish corruption and improve governance. It was proof that we may falter but in time, the spirit of EDSA 1 rises again to put things right.