Salvador G. TironaIn this day and age when consumer awareness has made companies more wary of their actions, corporate social responsibility (CSR) is as important as ever. Now that technology allows anyone in the world to take pictures or videos and share them instantly over the Internet, we exist in a world where even the smallest actions can make or break brands. As expected, companies are quick to jump into the good publicity bandwagon just to show they exemplify social justice—often through CSR projects.

“Honestly, it’s really hard to define what social justice is, because it is quite broad. Often, we think that social justice only involves returning what is due to the community in what you do as part of your business,” said Salvador G. Tirona, president and chief operating officer of Lopez Holdings Corporation. “But what many fail to consider is that social justice does not just operate outside the company. It’s bigger than that.”

That’s because for Tirona, social justice can also exist where there are no cameras present— internally, within the ranks of the company.

“Returning to your employees what is due, that is justice in itself. If you think about it, the Lopez Group of companies would never be what they are now if it weren’t for their employees, right? So really, I believe there’s justice in giving them the benefits they rightfully deserve, despite external circumstances,” he said.

Employees not on losing end 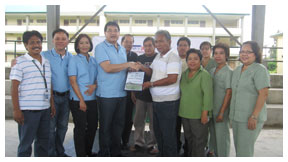 “During the time when Maynilad was having financial problems, the only clear way out was to return the concession to the government. The Lopez Group would absorb the losses, that’s for sure, and anybody in his right mind would think, ‘I already suffered the losses, why will I have to concern myself with what happens to the employees?’ But with our solution, we made sure the employees were not on the losing end. That was always our key concern. We solve our financial problem in whatever way is needed, but at the same time, we have to make sure our people are never shortchanged. “

This general mindset for “internal justice” of sorts has paid off for the Lopezes.

“Back in 2002, Benpres (now Lopez Holdings) went into default. Up until 2005, when we were able to find a solution, the employees were willing to sacrifice their benefits just to help the company. I wasn’t expecting that gesture, and I was so astonished. Of course, when the smoke cleared, we went to the Lopez family to discuss paying back the employees’ kindness, to which the Lopezes agreed. It was really amazing,” Tirona recalled.

Tirona admitted that it was this culture of compassion that got him working with the Lopez group in the first place.Ten years earlier, he was general manager of three manufacturing companies of the Columbian Motors Group, handling six car brands: BMW, Mazda, Kia, Subaru, Land Rover and Daihatsu. He had by then spent three years overseas to start up Vietnam Motors Corporation as part of his work for Columbian. At that point, what he was looking for was a group he “could retire with.”

He first joined Maynilad where as chief finance officer (CFO), he had to address problematic issues related to the concession agreement, in order to obtain project financing for the water utility. After years of painstaking negotiations, it became clear that the issues with the concession agreement would not be addressed to the satisfaction of project lenders. With no project finance coming, Lopez Holdings decided to return the concession to government in 2004. Yet, priority was given for Maynilad employees to receive what was due them, including equity in the company.

Tirona next became CFO of Bayan Telecommunications Inc. At that time, Bayan was in the homestretch of a court battle for its financial rehabilitation. Bayan lost money building its fixed line network. Subscriber numbers were held back by greatly limited interconnection with the incumbent phone company. Different restructuring plans went back and forth in the course of the court proceedings and in June 2004, the Pasig Regional Trial Court finally approved a rehabilitation plan for Bayan. While the court decision on Bayan was not ideal, Tirona thought it was still workable for the company, which needed a closure of the case in order to move forward. During those difficult times that entailed reducing headcount, the Group bent to allow Bayan employees to receive benefits beyond those prescribed by law.

When he transferred to Lopez Holdings, it was in the middle of its own debt restructuring exercise. Hence, the tightened belts and suspended benefits. But the Lopezes were consistent in attending to the needs of the employees, cognizant of the common sacrifice everyone was making to see the rehabilitation of the company through.

“I’ve worked with different groups before—the Ayalas, the Yuchengcos, Alvarez, and even with the government. Maybe we can say that the business climate back then was different from how it is now, but I can surely say na iba yung style dito sa (it’s different with the) Lopezes. Despite the [Group’s] size, you’re able to interact with them like you’re part of the family. It isn’t overly casual, but they are very reachable. There’s no distance—they are really concerned with how the employees are faring.”

Perhaps, genuine social justice can still exist in an age where the term is loosely thrown around for publicity purposes. Perhaps, other values can spring forth from the genuine concern for the fair treatment of people. But if there’s one thing that we can be sure of, it is the fact that true social justice is exemplified when there is no one looking—without the goal of public approval, in a world where no cameras exist.