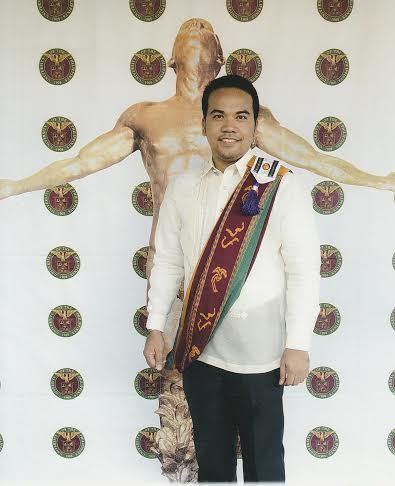 Jason Jimenez during his UP Law graduation in 2015After burning the midnight oil for around five years, First Philippine Holdings Corporation’s (FPH) Jason Jimenez adds another feather in his cap. He is now a lawyer. He is also a certified public accountant (CPA) and certified internal auditor (CIA).

Jimenez completed his juris doctor degree at the University of the Philippines (UP). He is a recipient of a dean’s medal for academic excellence. He is a member of the Order of the Purple Feather, UP Law’s honor society.

Born and raised in Bataan, Jimenez is known for his love of knowledge and learning, and his passion and determination to succeed and become a person of significance. He lives by the following life principle: “We define our own future. The life that we want to live is a product of the thoughts and actions that we make every single day.”

Perhaps drawing inspiration from his idol, Nelson Mandela, who is “a true fighter who has transformed the lives of his people,” he defines his highest aspirations in life as follows: “I want to be a great lawyer and to practice law in a ‘grand manner.’ I also want to teach young minds and help transform society by pursuing causes for education and social justice.

While with the FPH Internal Audit Group, Jimenez took and passed the exams to become a CIA. He was also a recipient of the certificate of honor award, one of the global William S. Smith Awards, for his outstanding CIA examination performance in 2009.

He also took and passed Level 1 of the chartered financial analyst program before deciding to pursue law in 2010, prior to his assignment as a member of the FPH Tax Center.

His parents served as his primary inspiration for taking up law. They are among those who make him tick every day.

“I live and dream not just for myself but for my family and other persons in interest. As I wake up and start a new day, I always remind myself how precious the gift of life is. To live another day means another great opportunity to thank the Lord, to work, to dream, to love and to be good and meaningful to others,” Jimenez said.

others,” Jimenez said. Upon passing the recent bar exam, his boss, Gemma Rose Roque, vice president for Comptrollership, proudly announced via email to everyone in FPH: “Today he became a CPA lawyer! Congratulations, Atty. Jason Jimenez of Comptrollership and the Tax Center for passing the bar exam. Your hard work and perseverance of combining work and study in the past years paid off. Well done!”

Among those who followed through and congratulated him was FPH chairman and CEO Federico R. Lopez.

Jimenez is currently an assistant manager at the FPH Comptrollership Group and Tax Center, where he assists in evaluating tax assessments and documentation and collaborates with consultants, external counsels and other parties in presenting the FPH Group’s positions to the tax authority, tax court, local government units and other government regulatory agencies.

When asked to whom he would dedicate his achievements, Jimenez said: “I would dedicate what I have accomplished so far first to God, second to my family, and third to the University of the Philippines and the public in general which funded my education as an Iskolar ng Bayan.”

On the other hand, one of his closest friends, Dodi Ann Catalan, assistant manager for Internal Audit of First Gen, speaks highly of him.

“Ever since our college years, I’ve always known Jason to be a smart, diligent and hardworking person. No wonder he is where he is now, because he always gives his best in everything that he does. He is certain about his dreams and goals in life, particularly his big dreams for his family,” Catalan shared.

“I wish him continued success and happiness in everything that he does,” she added.

“Learning from mistakes and being accountable for the consequences of your own decisions, no matter what happens.” These are among Jimenez’s biggest lessons in life.

He puts a premium on health and wellness.

“I know that I am capable of doing great things and that I am able to make the most out of what God has given me when I am healthy,” he said.

Jimenez also shared the following wishes: for FPH and the Lopez Group, “I wish for sustainable growth and bright corporate opportunities while maintaining their social relevance”; and, for the country, “I wish for a progressive Philippines where every Filipino lives comfortably and with dignity,” he said. (Story/Photo by: Ross Hamo Jr.)