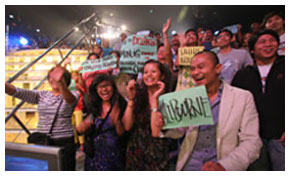 ABS-CBN’s Studio Tours and Museum Walk department is abuzz with activity when LopezLink drops in one afternoon. In a corner of the reception area, guests cluster around a display of Kapamilya collectibles. At the other end of the room, uniformed staff members juggle phone calls underneath framed celebrity handprints.

A few steps away, mock-ups of different ABS-CBN productions—a centerpiece feature of the whole Studio Tours and MuseumWalk experience—take up several showrooms. At the time of LopezLink’s visit, these included TV shows “Wowowee,” “Maalaala Mo Kaya” and the defunct “Rounin”; the news and current affairs group’s 1969 “Man on the Moon” broadcast; and the Kris Aquino starrer “Feng Shui.” A small preview room gives tour participants a crash course on the history of ABS-CBN (see sidebar). These stops are part of the tour/museum walk that attracts droves of fans to the ABS-CBN headquarters every month.

Pre-Studio Tours, getting a close look at the ABS-CBN studios and facilities, to a certain degree, was a matter of luck and good timing. For example, students hoping for a free behind-the-scenes peek at the workings of ABS-CBN coordinated directly with the department related to their field of interest; they then adjusted their schedules according to the availability of the personnel tasked to show them around. For a time, Talent Center and the PR department also handled the logistics and conduct of the visits.
In August 1997, ABS-CBN chairman Eugenio Lopez III (popularly referred to as EL3) decided to formally organize studio tours and offer them under Star Magic Inc., the company’s licensing and merchandising subsidiary. The pioneer batch of five tour guides included Studio Tours’ current administrator, Aaron Domingo. 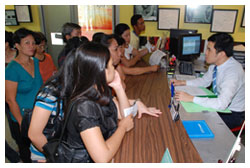 “EL3 saw the need to establish a department that would cater specifically to the needs of the public, especially loyal Kapamilya viewers who would like to see what happens inside the studio or see our facilities,” Domingo explains. Soon, ABS-CBN Global honcho Raffy Lopez decided to merge Global’s free tour services for TFC subscribers with that of Studio Tours. The new centralized operations allowed Studio Tours to cater to balikbayan as well as to locals, including students and community organizations.

Studio Tours is part of the corporate communications division now headed by Bong Osorio, with Rogy Panganiban as manager. In addition to Osorio, Panganiban and Domingo, there are 21 full-time employees working from 8 a.m. to 5 p.m. every day of the week: 14 tour guides who also act as customer service representatives, six cashiers and a stockman. 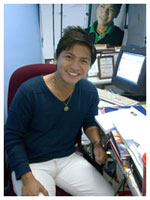 The department’s current package tour offer includes a guided tour plus a chance to become part of the audience for live shows such as “Wowowee,” “ASAP,” “Entertainment Live,” “Ruffa and Ai,” “Sharon,” “GKNB” or “The Buzz.” For students on exposure trips, Studio Tours also offers customized packages. Mass communications students, for instance, may attend tapings of teleserye, while would-be electronics and communication engineers could visit transmitter sites and control room, on top of the guided tour.

Student groups could comprise as many as 400 individuals, with up to 300 non-students joining the daily tours. In terms of foot traffic, some 8,400 people traipse through ABSCBN’s studios and facilities every month, Domingo reveals.

In the first five years of Studio Tours’ history, there was often a sharp delineation between the lean and the peak seasons. Then, the peak months lasted from January to March; foot traffic would drop during the summer break, and would spike again from October to December. 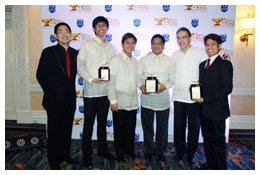 Things turned around when a prodigal Kapamilya host took another shot at the noontime slot four years ago. For years, ABS-CBN had tried a virtual cocktail of hosts and formats in an attempt to wrest supremacy from its veteran competitor. With the wildly popular new show, it seemed the formula had finally been found—a formula whose desirable effects in one way or another also redounded to other shows and to Studio Tours. “When ‘Wowowee’ was established, there wasn’t a day or a month that wasn’t peak season for us. The full bookings caught us by surprise. The show really pushed us up,” Domingo says.

The success of Willie Revillame’s show had a domino effect on other shows, such that Studio Tours is fully booked every MILESTONES y day until 2010!
“It’s amazing because ‘Ruffa and Ai,’ which was launched only in the first quarter of 2009, is booked until June. So, little by little, most of the other shows are being filled up as well,” the administrator reports. 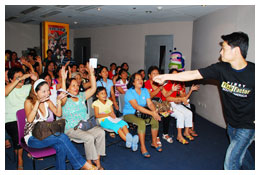 Studio Tours’ move to a more viable location (the old site of Io KTV) at the ELJ Center two years ago came with a daunting new sales target—from P10 million in annual income, the financial bar was raised to P19M. Despite the seeming impossibility of the task, the group was able to not just meet, but even surpassed the quota for two years running.

This year, the group also took home an Anvil Award of Excellence from the Public Relations Society of the Philippines, attesting to the efficacy of the tour service in promoting ABS-CBN.

Which was why, Domingo smiles, one won’t see TV or print ads for Studio Tours anytime soon. “As of now, for ‘Wowowee’ or ‘ASAP,’ our next available schedule is in February 2010. Were fully booked until the end of the year. If we advertise, the wait list will only get longer.” 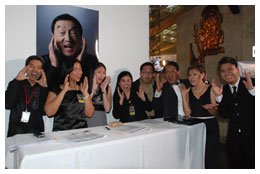 This setback notwithstanding, Domingo aims for a tour de force performance for Studio Tours in 2009, especially with its improved museum segment and other operational adjustments.

One such project is the museum’s celebrity handprint collection, which will be organized and unveiled after renovations are carried out in the display area. ABS-CBN executives Cory Vidanes and Linggit Tan determined the Kapamilya stars whose handprints were solicited and the list now includes Dolphy, Judy Ann Santos and Korina Sanchez. 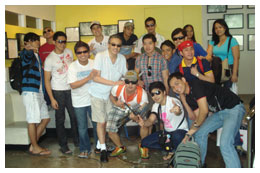 “Also in 2009, we hope to set up a pressroom within the Studio Tours area, so that our friends from the press can work on their stories and meet their deadlines right here,” he adds.

“We never thought that it would become a household name,” he says. “Even when we won in the Anvil Awards, we never thought we’d have this big of an impact. The reception has been overwhelming. We hope to live up to everyone’s expectations, and we promise to further improve our services.”