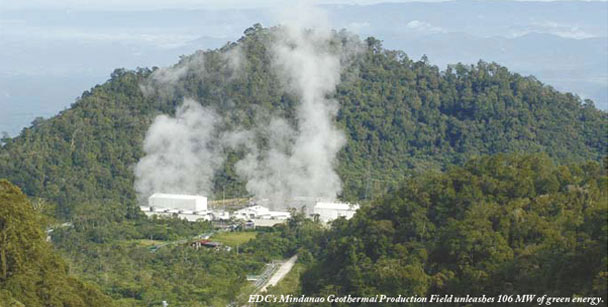 EVEN as most other companies are scrambling to mitigate the effects of the financial crisis on their bottom lines, things are just starting to heat up and get brighter over at Energy Development Corporation (EDC).

The newest addition to the Lopez Group ofcompanies, EDC is extremely optimistic about its fortunes in 2009. Not the least because the 33-year-old company is on the road to fulfilling the goals it has set for itself: to be the Philippines’ leading company in renewable energy as well as the world’s No.1 in geothermal energy.

“Our vision is always to be global,” stresses president and CEO Paul A. Aquino in an interview at the EDC headquarters in Taguig. “In the Philippines, we want to be No. 1 in renewable energy. In the world, we want to be the No. 1 geothermal company.”

EDC started its corporate life as Philippine National Oil Corporation (PNOC)-EDC on March 5, 1976. The company’s main mission was to wean the country from its dependence on imported fuels by developing indigenous energy sources, specifically those that didn’t put a strain on the earth’s resources. 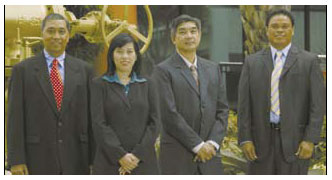 “The country in 1973 suffered when the first oil embargo came,” Aquino recalls. “At the time, the government decided that we had to look for some other way of producing electricity other than importing oil. This company used to have many divisions, it had uranium, oil and gas, coal, and alcogas divisions back then.”

Guided by volcanologist Arturo Alcaraz, acknowledged as the father of geothermal energy in the Philippines, the company eventually focused on generating electricity from geothermal steam. 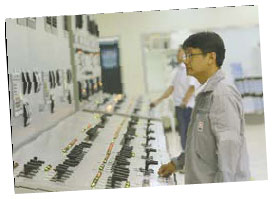 The initial venture into geothermal kicked off EDC’s nonstop exploration that produced five geothermal operating fields. Since 1983, the Leyte Geothermal Production Field (LGPF) has produced more than 80,750 Gwh of steam after a little over two decades of operations, equivalent to at least 145 million barrels of imported fuel and savings of $4.5 billion for the country.

Now, in addition to the LGPF, EDC has existing projects in Negros Oriental, Negros Occidental, North Cotabato and Albay-Sorsogon. Explorations in several other locations are expected to beef up its geothermal capacity by several hundred megawatts more.

Geothermal energy is clean, renewable and provides a long-term, continuous solution to our dependence on imported fuels, which contribute to global warming, thus the descriptive term “green.” No fossil fuel is burned in a boiler nor is harmful exhaust produced in order to generate the steam to run the turbine for electricity. The earth serves as the boiler in geothermal projects where steam flows from natural reservoirs three kilometers below the ground. This means the use of geothermal power contributes to reducing the carbon emissions that harm the environment.

geo4Geothermal energy may be produced only in the areas where the resources can be found, thus, it cannot be loaded in a tanker like oil. Being site specific, it must first be converted into electricity where it is found. This is why there are long transmission lines and submarine cables to connect geothermal resource to the areas with power demand like the Leyte geothermal power house which supplies the high demand of Luzon and Cebu. However, the dollars that are otherwise needed to procure imported fuels mean savings can be funneled instead for other more urgent social needs.

Geothermal energy is a long-term and reliable energy option. It is classified by DOE as renewable energy. Geothermal reservoirs are continuously recharged by water stored by forests and through the reinjection of separated waters from spent steam from the power plant. This enables geothermal power plants to run as baseload plants operating 24 hours a day, seven days a week. As early as 1983, the government knew that to sustain the geothermal operation, it was important to protect the forest cover in geothermal areas to keep the reservoir productive. This is why EDC has one of the country’s most effective forest protection programs. 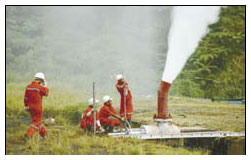 geo5The world’s first ever geothermal field is in Larderello, Italy commissioned in 1904 or 105 years ago and is still operational today. The 105-year-old field serves one million households and produces 5,000 gigawatts.

In the Philippines, the 1,199 MW currently produced by EDC accounts for 60% of the country’s geothermal capacity, with Chevron’s 772MW making up the balance. With 1,970 MW total, the Philippines is second only to the United States in terms of generating capacity.

According to Aquino, the search for geothermal starts with checking the target area for surface manifestations in the form of mud springs, hot springs or fumaroles.

“It gives you an idea that there’s something boiling below. Then you do a magnetotelluric study; you’re talking here of between $100,000 and $150,000. Your magnetotelluric study might indicate that there might be altered fluids below the ground which bears geothermal. It doesn’t say there is, it says there might be. So now, you’ll do your first well, which will be very, very expensive because you’ll have to build a road to go to that area. So that first well will cost you about $7 million. The second well is, of course, cheaper because you already built the roads. 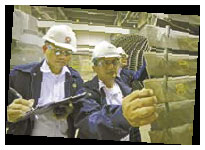 geo6“Then, when you hit the first well, it will only tell you ‘yes, there is,’ and now you have to decide how big. That’s the crucial decision. It could mean at least two more additional wells to delineate the boundaries of the resource. By this time you have already spent about $15M just to know how big and what the chemical makeup of the fluid is.” It’s only at this point, Aquino says, that the other requirements for the complete feasibility can be done.

“And by that time, after spending $15M, you find out that it’s not sustainable. You’re dead. We’ve made lots of mistakes in the past, but you have to learn from them. I used to insist that there should be better data until I remembered that we’re dealing with nature, our business is tied in with nature. That’s why our environmental management is very strong in the company, because of that. We owe our business to Mother Earth.” 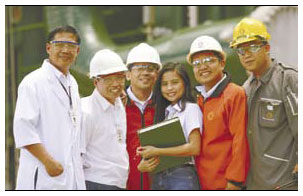 Overall, a minimum of five years is needed to get a well production field up and running. In EDC’s case, it took 20 years before it was able to tap the geothermal reserves of Mt. Apo in Mindanao, partly because of a tug-of-war between government on one hand and environmentalists and other oppositors on the other.

The Mt. Apo experience of EDC helped the government develop the parameters for social acceptability of projects. EDC developed its own brand of CSR way back in 1987. Even as the fashion then was philanthropy and dole out, EDC installed more sustainable and meaningful benefits for communities. It believed it should give back to the communities which host its production fields through a program called Balik-Biyaya, or “giving back the bounties and benefits of nature to the society.”

Today, host communities equivalent to 18,000 households continue to benefit from Balik-Biyaya’s programs focusing on education, health, livelihood and the environment. The youth enjoy college scholarship grants and free miscellaneous fees, while their school facilities are upgraded and teachers are trained; their elders, on the other hand, attend adult literacy and skills development for livelihood. The goal is to raise their capacity to generate resources for their basic needs to improve their quality of life, without depending so much on government as EDC is operating in mountain areas.

For the community in general, Balik- Biyaya offers free medical, dental and surgical missions; improves the barangay health centers; trains health workers; gives seminars on values formation, leadership, and oral and written communications; and organizes community residents into farmers’ associations that can run their own livelihoods and decide on socio-political activities. EDC has done CSR since 1987 or 4 years after it commissioned its first projects in 1983. Almost two dozen awards for contributions to community and environment development attest to the fact that for EDC, there’s much more to doing business than maintaining a robust bottom line.

This year, EDC has pinpointed several priority projects and tasks to be accomplished as part of its business expansion. First, to bid for three National Power Corp. power plants which will be put on the block in mid-2009, and to which it is currently supplying steam, namely Palinpinon, Tongonan and Bacman. Second, to pay off loans worth 12 billion yen also by midyear. Third and fourth on the list are the completion of two projects in Nasulo and Tanawon.

The company is also beefing up the capacity of the 112-MW Pantabangan-Masiway plant in Nueva Ecija to enable it to start producing 122MW within the year, in addition to developing new geothermal fields. And, of course, plans to conquer the global arena will start in Indonesia, where EDC is undertaking preliminary surveys.

“Preliminary surveys are contracts with the local governments to do studies on a particular geothermal site,” Aquino explains. “Once you get that contract, it gives you the right of first refusal to do something in that area, we won’t need to look elsewhere.”

On the right track

Aquino concedes that despite its strong finances, the debt market would be “very, very tight” for EDC this year in view of what he calls an “unprecedented” financial meltdown.

“Our equity is bigger than our debt, so we have a very big headroom for borrowing. However, lenders, I think, are lendingshy right now and this will be so for the rest of 2009. The propensity to lend is not there. That’s the No. 1 risk that we’re facing, finding somewhere we could borrow funds.”

Overall, thanks to prudent spending, the company remains in good financial position to meet the challenges of 2009. With income and cash flow already assured by its power purchase agreements or PPAs, controlled spending, and an extensively trained and professional workforce pulling together, EDC is on track to achieve its grand vision.