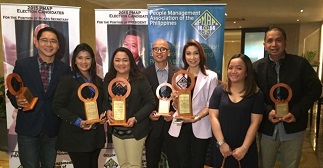 DZMM received the Hall of Fame award as Best Radio Station of the Year at the PMAP Makatao Awards for Media ExcellenceDZMM is still Mega Manila’s undisputed number one source for news, information, and commentary as it topped all AM radio stations in the latest Kantar Media Radio Audience Measurement survey.

In September this year, DZMM registered an average audience share of 27%, or five points higher than DZRH and DWWW, which both hit 22%.

Coming on the heels of DZMM’s ratings victory are the recognitions it recently received for its excellent news coverage and for promoting good people management in public and private sectors.

Recently, DZMM received the Hall of Fame award as Best Radio Station of the Year at the Makatao Awards for Media Excellence given by the People Management Association of the Philippines (PMAP), an organization composed of business executives and companies.

In light of these victories, DZMM continues to give thanks to its listeners and viewers via its “Radyo Panalo” promo that will run until the end of the year. Every day, DZMM anchors give away transistor radios in different barangays to those who correctly answer the question of the day.

For the latest news and commentary, tune in to DZMM Radyo Patrol Sais Trenta, the number one AM radio station in Mega Manila, DZMM TeleRadyo (SkyCable Channel 26), or via online livestreaming on dzmm.com.ph. For updates, follow @DZMMTeleradyo on Twitter or like www.facebook.com/DZMMTeleRadyo. (Story/Photo by: Kane Choa)