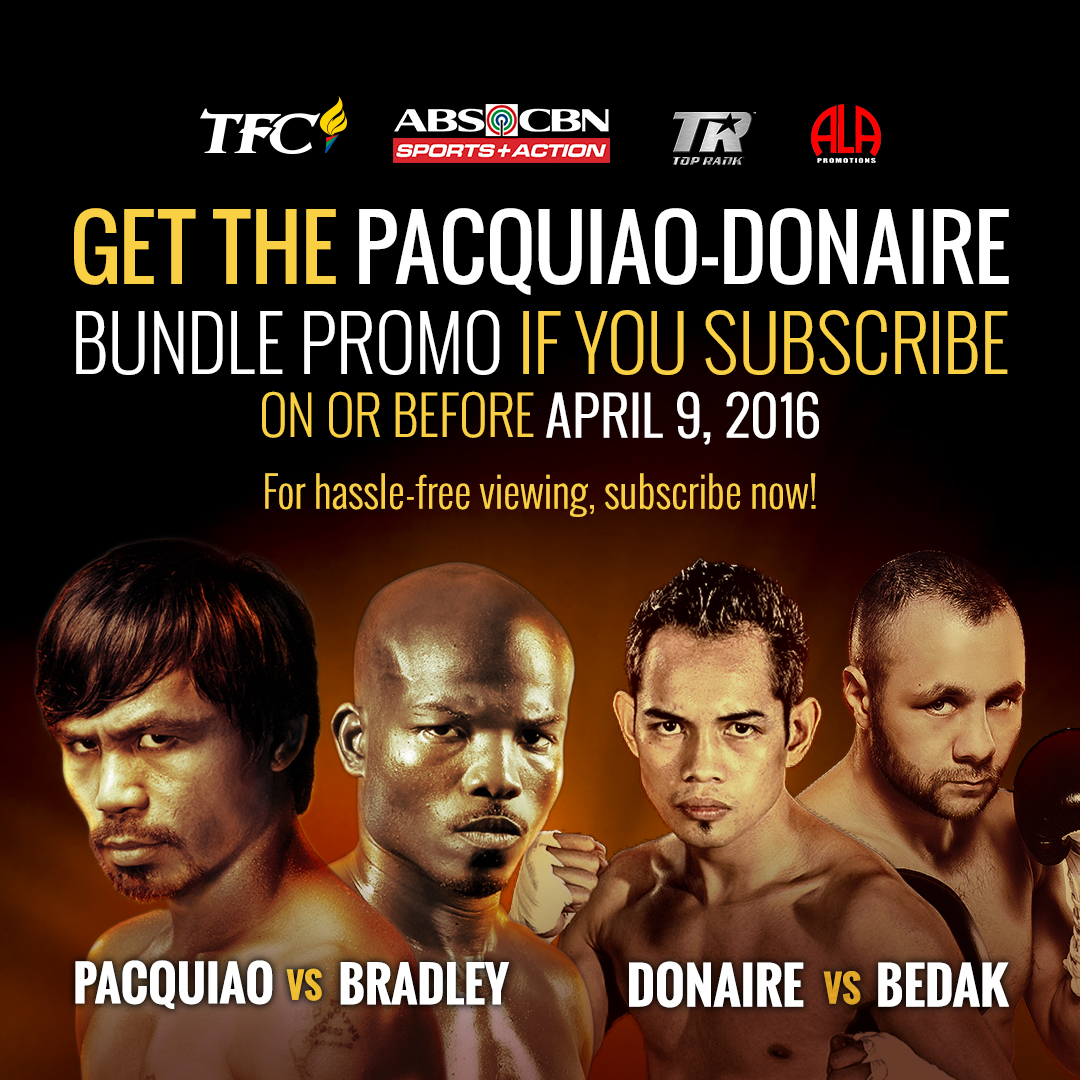 Pacquiao vs Bradley and Donaire vs BedakAs the Philippines honors its war heroes this April, The Filipino Channel (TFC) will set the stage for two of the Philippines’ greatest boxing heroes’ to uphold our legacy of champions. In another landmark agreement, Top Rank grants ABS-CBN Middle East, FZ LLC exclusive distributor rights for the Manny Pacquiao – Timothy Bradley fight in the Middle East this April. The premier network will also deliver the Nonito Donaire – Zsolt Bedak fight to the Middle East, and including Europe.

Kai Rodriguez, ABS-CBN Europe, Middle East and Africa Managing Director, is proud for TFC to be bringing the two historical fights in a single month. “Across time, the Filipino has always been known to be a proud race of fighters. This courage defines our ability as a people to overcome challenges in many forms. This month, as we celebrate our war heroes’ feat, we also pay homage to the brave warriors like Pacquiao and Bradley who make us proud in the boxing field with their relentless spirit and unwavering skill.”

The first and only eight-division champion People’s Champ Emmanuel Manny “Pacman” Pacquiao and The Filipino Flash Nonito Donaire will try to make the nation proud again in this year’s most-anticipated fights airing live, exclusively via Pay-Per-View in the Middle East and across TFC’s partner stations and cinemas.

On April 9 Pacific time, Pacman will battle “Desert Storm” and American Timothy Bradley once again for the Light Welterweight title. Pacquiao and Bradley first battled it out in 2010 where the latter won in a decision that favored the 33-win,13-knock outs (KO), and single-loss champ. In 2014, the two fighters met yet again where Pacquiao redeemed his crown. The two will come face to face where it all began – at the MGM Grand in Las Vegas, U.S.A.

Meantime, 36-3, 23 KO fighter Donaire will slug it out with WBO No. 4. and Hungarian fighter Zsolt Bedak (25-1, 8 KOs) in the Queen City of Cebu, Visayas on April 23 Manila time in the fight dubbed “The Time Has Come: Donaire Vs. Bedak.”

The Pacquiao-Bradley fight happens April 10 at 4 a.m. KSA time and 5 a.m. UAE time. The fight is also available via OSN, E-Life, Du, Mozaic TV and powered by Ooredoo and can also be witnessed in Novo Cinemas.

The Donaire and Bedak fight happens April 23 at 1 p.m. KSA time and 2 p.m. UAE time. Brought to the Middle East and Europe by ABS-CBN Sports + Action and ALA Promotions, the fight is also available through the carriage partners in the Middle East and in Europe.

A power bundle of the two fights await Filipinos in the Middle East as TFC offers a special rate of AED109 for PPV purchases for the two fights before April 9, Day of Valor.

Meantime, boxing fans in Europe can witness “The Time Has Come” at a special rate of 9 GBP or EU 12.

For the live PPV experience, visit tfc.tv or the main menu of TFC on IPTV.
For more information, visit emea.kapamilya.com (Story/Photos by: Marianne de Vera)