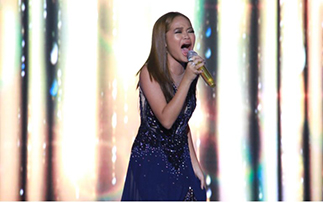 Janine recorded the highest total average score of 96.11% from the combined hurado scores and text and online votes, thrashing Ato Arman (74.27%) of Bukidnon and Steven Paysu (61.80%) of California.

The youngest in the competition, Janine was also the first to enter Saturday’s grand showdown during the weeklong grand finals. Her performances frequently garnered raved from the judges and have racked up millions of views on YouTube.

In the final round, Janine earned a standing ovation from the judges and the madlang people in Aliw Theater after she sang a medley of songs by Bamboo—“Noypi,” “Tatsulok” and “Hallelujah.”

As the grand champion, Janine won a vacation package from 2GO, a musical gadgets package from JB Music, a livelihood package from Siomai House, premium television sets from HKTV, management contracts, a house and lot from Camella, P2 million and a trophy created by visual artist Toym Imao.

After the vocal showdowns in “Tawag ng Tanghalan,” beauty queens will take over the “It’s Showtime” stage in the grand finals of the “Miss Q & A” segment on June 30.