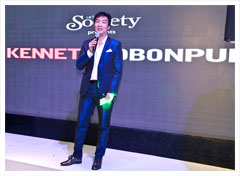 Internationally renowned artist Kenneth Cobonpue has finally taken his unique creations to the country’s capital with the highly anticipated opening of his first store in Metro Manila, which was culminated with a grand opening celebration held in partnership with Metro Society magazine.

Cobonpue officially broke Metro Manila’s design barriers with a showcase of his vision through his innovative creations on the evening of October 2.

Known for simple elegance paired with high impact, and acclaimed for proving the worth of Filipino talent from

Budji Layug, Raul Manzano, Royal Pineda, Kenneth Cobonpue and J. Anton Mendoza country to country, the grand opening of Cobonpue’s Manila branch stood testament to the growth of the country’s artistic value—a value that has already been recognized twice by Metro Society, in which he has graced two of the magazine’s covers, as both a businessman and a creative genius.

Featured in the magazine’s Annual Men’s Issue in celebration of Metro Society’s 10th anniversary, Cobonpue led the list of men deemed worthy of recognition for their outstanding performances in their respective fields.

It is such that Metro Society gladly set the spotlight on this momentous move in the Metro Manila art scene. With a vision of presenting society’s best to society, the grand opening of Kenneth Cobonpue Manila was the perfect embodiment of an evolution in aesthetic that 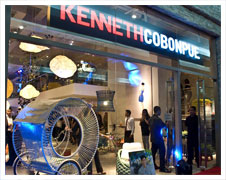 Kenneth Cobonpue Manila Branchbegan in the Philippines’ own shores before rapidly spreading all around the world.

Metro Society has been made available through ABS-CBN Publishing, Inc. Grab the latest issue of Metro Society featuring fashion pioneer Michael Kors on the cover. For updates, visit www.facebook.com/pages/Metro-Society-Magazine. (Story/Photo by Katherine Solis)