Meet you on Mt. Tagapo 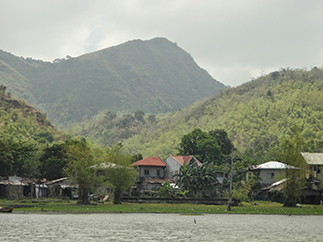 The hilly island is within the boundaries of Rizal, under the jurisdiction of two municipalities. The western side is part of Binangonan, while the eastern section is part of Cardona.

Talim Island is volcanic in origin and forms the southwest rim of Laguna Caldera. On this island lies Mt. Tagapo, also called Mt. Susong Dalaga. From the towns of Laguna, you can readily spot the peak of Mt. Tagapo, which indeed has the form of a young woman’s breast.

To get to Mt. Tagapo, we rode a Binangonan-bound jeepney at the EDSA-Crossing terminal.  Arriving at the Binangonan port at 8:45 a.m., we hopped on a pump boat which would take us to Brgy. Janosa via Laguna de Bay. The boat left the dock at 9:30 a.m. and touched down at the jump-off point (Brgy. Janosa dock) at 11 a.m. Here we met Archie, our guide.

At the Mt. Tagapo base camp, we paid the registration fee and signed the logbook. Then, off we went.

We took a breather beside the famous mango tree at 11:45 a.m. At another large tree around noon, we consumed our packed lunch and took photos of great nature views.

With the peak already visible from afar, we rested at the campsite area at 1 p.m. Here you could see a breathtaking view of the tall grass surrounding the mountain being “pushed” by strong winds. Such a sight to see!

After the brief break, we started the assault on the peak amidst the tall grassy trail, wherein if you look back, you could also view nature in all its splendor.

Reaching the summit at 1:30 p.m., 395 meters above sea level, there is a 360-degree view allowing you to see other mountains such as Mt. Sembrano and Mt. Makiling, as well as Laguna de Bay.

Back at the jump-off area at 3:30 p.m., we refreshed ourselves at the house of the guide and ate various forms of street food being peddled.

Pump boats arrive at the dock at certain times only, and we departed around 5:30 p.m. Mt. Tagapo is just one of the easy-level mountains which is not that popular; even Talim Island is such an underrated place. All I can say is that Mt. Tagapo is a very good mountain to trek. (Excerpted from http:// larga-bista.blogspot.com)