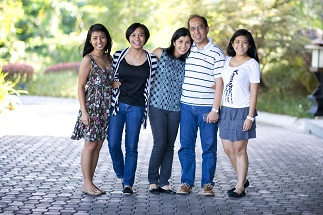 Dr. Art abd Vickie de Guia with their daughters Chrissie, Sabrina and AbbeyIf there is anything which Dr. Art de Guia, semiretired from First Philec, has observed in his years with the Lopez Group, it is how the Lopez Values are clearly and consistently demonstrated.

De Guia, who has a doctor of engineering degree from the University of California, Berkeley, has seen how, for instance, the value of integrity is nonnegotiable among his peers. And for the most commonly observed Values, he picks out unity, employee welfare and wellness and, of course, nationalism. The presence of the Lopez Museum and Library, with its extensive Filipiniana content, is just one concrete proof of the nationalism of the Lopezes.

He recalls that at a meeting of the Lopez siblings on the Values, Presy Lopez Psinakis would refer to her father’s values; for De Guia, this shows that the Values were handed down from her father, Eugenio Lopez Sr., and how deeply rooted these are within the family and outward to the Lopez Group companies executives and employees.

To this day, De Guia is still amazed at how Lopez Group chairman emeritus Oscar M. Lopez (OML) trekked the heights of Kota Kinabalu (the highest peak in Southeast Asia) at age 80, thereby setting the bar high on y6wellness. He also saw how OML organized and participated in wellness programs such as the well-attended monthly Walk the Talk activity of the Lopez Group HR Council.

This concern for employee wellness had a connection to how De Guia came to join the Lopez Group.

“I started in 1997 as managing director to replace incumbent Tato Diaz, a Lopez Group executive who suddenly passed away six months earlier,” he recalls. “As a result, a wellness program for executives and employees was started which is still ongoing.”

De Guia accepted the position as his family wanted to relocate back to the Philippines after years of overseas assignment. He had been posted by his former employers from Colgate Palmolive Co. in New York, New Zealand and Malaysia.

This genuine concern for its employees was also shown when an executive had an accident while traveling overseas on official business. De Guia adds that unity or the bayanihan spirit is also displayed in times of crisis situations, not only for the Group but also in the interest of the country such as during natural calamities.

“Every employee’s situation is immediately checked and accounted for to ensure that everyone is safe, while also providing relief to everyone affected,” explains this engineer who also has a master’s degree in industrial engineering and management from the Asian Institute of Technology (highest honors). He finished his bachelor’s degree in electrical engineering at Mapua, graduating first in his class and placing second in the board exams.

Another thing that makes De Guia a special executive is his attitude of seeing opportunities rather than challenges. He was involved even in areas outside of his primary assignment with First Philec. Aside from the opportunity of working directly with OML and his senior management, he was involved with business development, the Lopez Achievement Awards (LAA) and the OML Quality Excellence.

De Guia has always believed that a company can achieve excellence by developing and motivating companies and employees to participate in the LAA and the quality awards program. And he knows what he speaks of as seen in his educational background, awards received and his policy of achieving business excellence.

Now that he is retired, De Guia plans to spend more quality and excellent time with his family—wife Vickie and daughters Isabela, Christine and Sabrina. The first two are taking medicine at the Ateneo, while the youngest is in her last year of high school.

This “excellent” engineer has this advice to give to future generations of employees and Lopezes: “Stick to the Lopez Group Values (as your moral compass) and you will not go wrong. Also, walk the talk. (Story/Photos by: Dulce Festin-Baybay)