ABS-CBN's "Halalan 2013" is the most watched, most tweeted election coverage

ABS CBNs Halalan 2013Most Filipinos nationwide got their latest election news from ABS-CBN on Monday (May 13) and went online to send their thoughts via Twitter that made ABS-CBN’s “Halalan 2013” coverage a trending topic on the social networking site.

Filipino netizens also kept track of election news on Twitter where ABS-CBN’s “Halalan 2013” coverage became a trending topic. The hashtag #Halalan2013 was the only election coverage-based hashtag of a news organization to have landed among the social networking site’s trending topics.

ABS-CBN also highlighted the results in the hotly contested local races featured in its “KampanyaSerye” documentaries in areas like Manila, Masbate, Cavite, Cebu, Pampanga, Zamboanga, and Laguna to contextualize what the results mean to the electorate. Aside from focusing on local election rivalries, ABS-CBN also delivered fresh updates on the results in overseas absentee voting through its international news bureaus stationed all around the world.

With the help of about half a million Bayan Patrollers and 221 reporters in the Philippines and key global cities scattered in 45 live points, ABS-CBN was not only able to deliver the most comprehensive news coverage on the elections but also report election irregularities in different localities through its different media platforms. It also had the most credible and authoritative analysts dissecting the issues and results on "Halalan 2013."

“Halalan 2013” also marked the uninterrupted 48-hour election coverage for ANC and DZMM TeleRadyo for both cable TV and AM radio audiences. ABS-CBNNews.com provided the latest news, analysis of results, and as well as a social media tracker, launched in partnership with IBM Philippines, to monitor the social media buzz on the positive and negative commentaries and conversations about the candidates. 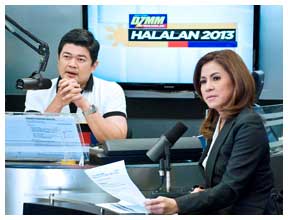 DZMM anchors Julius Babao and Jing CastanedaABS-CBN also empowered citizens with its Comelec-Halalan 2013 mobile app for smartphones and tablets that helped them find their precinct on election day, provided a list and profiles of candidates and partylists, as well as the latest aggragated, partial and unofficial election results in national and local polls.

Moreover, ABS-CBN set up BMPM stations in key areas in the country to assist voters in finding their precincts, receive complaints and reports regarding the polls, and respond to medical emergencies.

ABS-CBN’s “Halalan 2013” coverage was launched a year before the May elections to provide information to voters so they can make informed choices based on their vision for the country.

ABS-CBN’s “Halalan 2013” was the most responsive to the needs of the people in terms of information delivered through its various media platforms and in public service through its BMPM stations, making it the most trusted broadcast news organization that covered the national elections. (Story/Photo by: Kane Errol Choa)