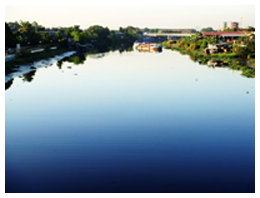 IN 1999, ABS-CBN Foundation Inc. (AFI) did the near impossible when it successfully took on the management of the reforestation of the La Mesa Watershed area through its then newly formed environmental arm, Bantay Kalikasan.
This year, the foundation trains its sights on a bigger and more ambitious rescue efort—cleaning up Manila’s jewel, the Pasig River, through Kapit Bisig Para sa Ilog Pasig (KBPIP).

”We have to change the way we look at the river,” AFI managing director Gina Lopez said during the program launch in February. “We should use the media to awaken the consciousness and the reverence that people should have for the Pasig River.”

“This is a massive project because you’re not just talking of the Pasig River but also of the tributaries,” stressed KBPIP project manager Girlie Aragon in a later interview with LopezLink.

“It requires the involvement of a large number of the population; in fact, most of Metro Manila, if you really want to keep it clean over the long term.” 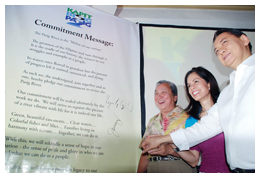 The 27-kilometer Pasig River winds through Metro Manila
and connects Laguna de Bay to Manila Bay by way of the Napindan Channel, one of the four major tributaries; the others are San Juan River, Pateros-Taguig River and Marikina River.
In all, a total of 47 tributaries, esteros and creeks feed into the river.

KBPIP aims to arrest some 80 years of abuse of the Pasig River, which saw the waterway decline steadily from “an important means of transport and center of economic activity” during pre-Hispanic times to being biologically dead in the 1990s. Today, one routinely comes across images of the waters choked by a solid foor of detritus, so thick one can almost walk on it; of giant
pipes gushing industrial waste into the waters; or even of residents liter-ally using the river as their personal toilet, without batting an eyelash.

“We need to make the person in Quezon City, for example, realize that what little creek or that estero behind his house is actually flowing into the Pasig River, so anything he throws into that actually ends up in the Pasig,” Aragon said. 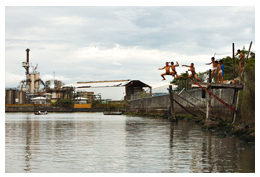 Through the Pasig River Rehabilitation Commission (PRRC), project co-managers AFI and the Department of Environment and Natural Resources (DENR) target zero toxic input into the river by controlling pollution at the source.

The two organizations have thus far enlisted the support of the local governments of Quezon City, Manila, Mandaluyong, Taguig, Pasig, Marikina and Makati. Also on the government side, the Metropolitan Manila Development Authority (MMDA), the National Housing Authority (NHA) led by Vice President Noli de Castro, and the Department of Science and Technology’s Industrial Technology Development Institute (DOST-ITDI) have come onboard.

From the private sector, Manila Water Co., Maynilad Water Services Inc., Goldilocks, Globe Asiatique Realty Holdings and ABS-CBN are among those that have signed on to support KBPIP, in addition to a growing list of individual partners.

The rehabilitation of the river will be accomplished chiefyl through physical efforts on the part of KBPIP and its partners, and raising the consciousness of the population in general, Aragon said. 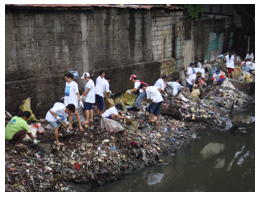 Now ongoing is the first phase of the seven-year rehabilitation effort, which saw PRRC and AFI work together in the voluntary relocation of some 94 households in Paco, Manila and another 57 from under the Mindanao Bridge in Quezon City to new homes in Montalban and in Calauan. Te latter site is being administered by AFI itself.

Existing partnerships with government agencies and non prof-its will also be put to good use as everyone gets busy with laying the groundwork for a new life for the transplanted residents: with the Department of Education for putting in educational TV infrastructure and teacher training and educational facilities; and with Gawad Kalinga and Habitat for Humanity for housing units.

“As Bantay Bata, were doing the nutrition and feeding program and the parenting program,” Aragon said. “We started with a feeding program so that we could address both the survival and the advocacy issues. These things that we have had a track record in the foundation we’ll now put into Calauan and Montalban.” 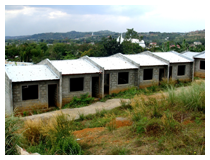 The organization aims to relocate a total of 1, 000 informal settlers this year.

With the clearing operations under way, KBPIP aims to establish clean river zones or CRZs in key locations, but especially at the headwaters, along the river, which will be overseen by the concerned Metro Manila LGUs. According to Aragon, up to 14 CRZs out of the targeted 407 are already in place.
Immediate targets

“A lot of the pollution is domestic, so if we can try to stop the toxic input in those sources, then it would be easier to keep the waters downriver clean,” she said.

To address the problem of solid waste management, material recovery facilities (MRFs), which are basically better-equipped recycling centers, will be put up so barangays will have a place to put their empties and nonbiodegradable waste (see sidebar story).

Getting the CRZs and MRFs up and running are among KBPIP’s immediate targets this year. Mean-while, First Balfour Inc. under Dr. Fiorello Estuar has taken on the job of being the engineering consultants for the project, pro bono.

“They are now working on a framework which can be adopted by all the stakeholders and meant to align all the solutions that each stakeholder can pursue,” Aragon said. “Hopefully, when we harmonize the different plans, we will be closer to cleaning the river up faster.” 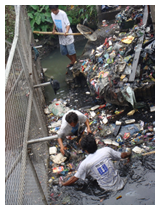 Other components of the physical thrust of the cleanup include the construction of easements along the river to deter people from resettling in the area, as well as putting in flitration systems and garbage traps to catch solid waste in the water. Bioremediation, meanwhile, will be utilized to clean water right at the source, so that it is already clean by the time it goes on to the Pasig.

For the long term, KBPIP is working with the two water companies, Maynilad and Manila Water, to fast track the establishment of wastewater treatment plants for large-scale cleanup of wastewater.

KBPIP also plans to launch an information and education campaign on sorting of garbage and how to compost, with special emphasis on schools and market-places.

“Anything that the child learns in school, he takes it home with him. And marketplaces seem to be a major area where waste just flows into the river,” Aragon explained. “We can start our education campaign in those areas. But not just us—it’s really mobilizing the schools, the barangays in the community.”

Cleaning up the river and dealing with the logistics that come with the job is very challenging, what with the sheer number of people involved within and with-out the organization. Aragon averred that the key lies in engaging everybody and firing them up because some of them might possibly just have the solutions.
Outpouring of volunteers

The support has been heartening, she observed. “There’s been an outpouring of volunteers, ideas on how to help us along. It’s been very, very encouraging, and we just need to set up the vessels to catch all this goodwill.” 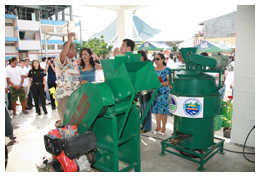 She emphasized the important role of the media and the citizenry in monitoring the project. Media may also help push the project forward by encouraging corporate and community effort, as well as highlighting success stories and other activities and initiatives.

“If we don’t involve the citizens, how can we ever hope to patrol such a massive area? We really have to count on citizen participation to monitor, so that no settlers will try to put up a shanty again in the areas that we’ve cleared; otherwise it’s not going to work."

“It’s really up to everyone to make this one big push,” she stressed.

Indeed, the KBPIP chief and the rest of her team are keeping their eyes on their one agenda to clean river in seven years.

“We’re aiming for that. Were giving it everything that we’ve got, Gina and the rest of the people here. With the people behind us, we are hopeful,” Aragon said.