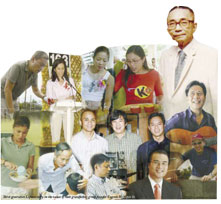 Generation nextEugenio H. Lopez had 22 grandchildren—13 of whom now work for the Lopez Group and in time will run it. His grandchildren say that their work today gives them a new way to connect with their grandfather and his values. Don Eugenio has been gone for 34 years, but something of his spirit still remains in the institutions he left behind.
For instance, Cedie Lopez Vargas sees that spirit in the Lopez Museum that she runs today. Cedie said: “My years at the museum have given me more insight into my Lolo, what he was really like—how he was such a nationalist, proud to be Filipino. I think he wanted the museum to tell our people something about the Filipino soul, through our art and our history.”
Piki Lopez said: “I’m very proud that [at First Gen] we’re building up a Filipino team that can match any of the foreign power companies. We can do this job just as well as they. That’s what is satisfying—when you build a company that will be world class. I think this is what Lolo used to feel when he ran Meralco; I think this is part of the satisfaction he derived.”

Generation nextGina Lopez said: “The Lopez family has a culture of honor, integrity and service. That’s why I love my family. It’s good to know that you are within a family tradition which supports what you want to do. Other families might not support what I do. But here, it’s encouraged…. We have to carry on the family tradition. I get a big kick out of it—out of seeing that you are part of a tradition and you are continuing to make it bloom.” For them, the work they do today is a way of carrying on the work their grandfather started over 80 years ago.

When the third generation of Lopezes was growing up, it wasn’t clear that there would even be aLopez Group in their future. They spent their formative years in the shadow of martial law. They saw how the family business had been pillaged by the dictatorship in 1972-73.They all know how quickly and arbitrarily the world can change.

The tribulations of the martial law years served one useful purpose, in that they underscored for the next generation that it made no sense to be attached to material wealth. Cedie recalled: “I learned to make the most of what I had, which is a very important lesson, and it is important to learn it when you’re young. So you don’t feel you’re entitled to all these things, to money and comfort.”
They had spent 1972 to 1986 finishing their studies and working for other companies, thinking that there would never again be a Lopez conglomerate. Then all of a sudden, the world somersaulted again, and the younger generation had to readjust their thinking.
Piki said: “I remember being really angry with the Marcoses for what they did to our family. So at that point, definitely I didn’t feel rich or privileged. I was really resentful and bitter. But all of a sudden, after the 1986 revolution, the Marcoses were gone. And so my objective became a lot more constructive. We had these companies back, but they were all in shambles, practically bankrupt. So my energy became channeled to something more constructive—helping the family.”

When Geny, Oscar and Manolo Lopez were rebuilding the Lopez Group after 1986, some of their children were working alongside them, getting to know the ropes and rising through the ranks. The most experienced entrepreneurial families know that there is no surer way than this to spell disaster for a family corporation than to base corporate succession on bloodlines instead of merit. The fact is, the young Lopezes who entered the family business in the 1980s went through a harder time than an ordinary employee.
This is nothing new for the Lopez family, of course: Don Eugenio was very tough on Geny when he was starting out in the Chronicle in the 1950s, and Manolo was made to pound the streets as a bill collector and a meter reader for Meralco in the 1960s. For the younger Lopezes like Gabby and Cedie, who joined ABSCBN, and Piki, who joined First Holdings, it would be their turn to go through the gauntlet. Piki understood: “It’s very important that our businesses should be run as businesses and those of us in the family who chose to work in the business have to earn the respect of our peers.”
Gabby Lopez’s path to the top of ABS-CBN was not easy. His father cut him no slack. If one day Gabby was going to run the company closest to Geny’s heart, then he was going to have to earn it. Geny said: “I have always judged Gabby more sternly than I do other people [in ABS-CBN], and I told him why: he had to live up to a higher standard; he had no special privileges; he had to earn everything.”
Gabby recalled: “He was very demanding, and he insisted that I work as hard as he did. He often castigated me in front of all his managers—embarrassing everybody. But that was his style. I never took it personally. I realized that what he was trying to instill in me was a very strong sense of integrity, and [the need for] staying focused on the business. He was ensuring that I learned it properly. I think his father treated him the same way, and he passed it on to me.”
After eight years of putting Gabby through the wringer as the network’s CFO, Geny was satisfied. In 1997, Geny named him ABSCBN chairman. Geny said: “I was fortunate that I had Gabby, who liked business and who liked the job and took to it as duck takes to water. Gabby has worked out very, very well. I’m quite proud of the guy. He doesn’t mind long hours, he’s got a good head on his shoulders, he’s got good values and he has a vision about where ABS-CBN can go.”

Geny and Gabby agreed about what values made for a winning broadcast organization: “the passion for excellence, the drive to be number one, the commitment to public service, the caring for our family of employees, and above all, never ever giving up.” Gabby said: “Those were the values my father taught us. He knew those values like the back of his hand. Over the years, he instilled them in us so relentlessly that they remain the essence of our company DNA. Imbued with these values, we learned how to win—and how to win with honor.”

Gabby calls Geny “my mentor and my hero”—the man who taught him “never to do anything halfway,” and that ABS-CBN “will always be in the service of the Filipino.” He said: “I pay attention to the values that drive the organization—because if you have the right values, people will make the right decisions. Big businesses are driven by values, not by profits—the profits are an output of doing the right things. It’s the way you keep score, but it doesn’t drive the business. The values are what drive the business. I learned the importance of values from my father.”
Piki underwent a similarly stern training regimen at First Holdings and he emerged eventually as CEO of First Gen, the top Filipino power producer. He too began to focus on Lopez values as being the reason for being in business. He said: “Despite getting pilloried now and then, we Lopezes keep going back to public service, to building better infrastructure and providing better services. It’s ingrained in us that public service is what we do best and where we would like to be. We are dedicated to investing here for the long term, because the need here for better infrastructure is so great.” He added: “The power industry is very visible. Everyone uses it on a daily basis. The destinies of the country and our company are intertwined. So there should be a convergence of the country’s objectives and our objectives as a company. When you have that kind of convergence, then you can go very far.”

The Lopez Group takes pride in being leaders not just in business, but also in social responsibility. Don Eugenio believed that business had to benefit society at large and not just shareholders. In 1958, he wrote: “We sincerely believe that a greater proportion of the earnings accrued from business should be returned to the people, whether this be in the form of foundations, grants, scholarships, hospitals and any other form of social welfare benefits.”
He practiced what he preached, with large donations to hospitals, schools and other worthy causes. Education and culture were his favorite causes. He was a generous donor to his alma maters: the UP, the Ateneo de Manila and Harvard. He made a crucial donation to help found the Asian Institute of Management (AIM). He also founded Lopez Memorial Museum and the Eugenio Lopez Foundation to carry on his philanthropic endeavors.
The next two generations of the family have continued the tradition of building a better society through philanthropy, through several foundations working under the aegis of the Lopez Group. These foundations include ABS-CBN Foundation, Knowledge Channel, Bayan Foundation and many more. For instance, Rina started Knowledge Channel in 1999. KCFI is an all-educational TV channel with 14 hours of curriculumbased programs on elementary and high school subjects such as math, science and English. KCFI acquires and produces video programs and distributes them via cable or satellite to public schools for free. Students who watch these programs regularly score higher on tests and get better grades as a result. Today, the Knowledge Channel is available to over 2.8 million public school students in 1,800 public elementary and high schools in 40 provinces nationwide.
Rina said: “Sometimes when we go to the schools, the principals say that when we bring TVs and materials and training, that actually, what we bring is love. Because they feel neglected, abandoned, that no one else cares. But here’s this group that provides educational materials, takes extra care of the teachers and takes time to visit them. So what’s important is not just the learning that we bring into the classroom, but the hope.”
Gina Lopez joined ABS-CBN Foundation in 1993 and over time built a legion of successful programs. Among them are: Bantay Bata 163, which rescues and cares for abused children; Bayan Foundation, which runs microfinance and business education programs for the entrepreneurial poor; Bantay Kalikasan, which runs environmental protection and conservation programs; and Sagip Kapamilya, which helps victims of disasters recover and rebuild.
She said: “Doing good for society is a Lopez family tradition, but we are adding a new twist. We are putting value-added. Lolo helped start AIM 40 years ago, but it was for the elite; now, Bayan Academy gives an added dimension by giving business training for the poor. We were into banking before [with PCIBank], but now we are doing it for the poor, with microfinance.” Gina said: “I think that this is would be something Lolo would have loved very much. And for me, to connect the family in a tradition like that is great. It’s a family tradition but with a new twist. You are putting in value-added. There’s a feeling of fulfillment that comes from knowing that you’re adding a new dimension.”