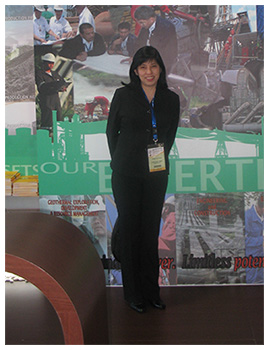 Agnes de Jesus“Plato once said, ‘Do not train a child to learn by force or harshness; but direct them to it by what amuses their minds, so that you may be better able to discover with accuracy the peculiar bent of the genius of each.’ Indeed, my mentor, Ma’am Agnes, was not only my teacher in the corporate world; she was also my adviser in all matters pertaining to my craft.”

This was how Dave Devilles, former Corporate Communications specialist at Energy Development Corporation (EDC), described his professional relationship with Agnes de Jesus, who retired as EDC’s senior vice president for Environment and External Relations, and compliance officer in early 2014.

Her team called her “Mother” or “Mader,” for De Jesus’ particular leadership style was both nurturing and character forming. She was also like a commanding general leading her troops into a crucial battle on behalf of Mother Earth.

“She [encouraged] original thinking and [allowed] you to express ideas without fear of reprisal,” Devilles shared in an email interview. “If you err, she will use that as an opportunity for you to learn. She can be stern but she will never shame you in front of your colleagues, unlike other managers who employ terror and intimidation if only to reinforce their authority. It’s not her management style.

“Despite differences in opinion, everyone in EERG managed to work as one team with her guidance inspiring all of us to move towards one direction. She led by positive influence,” Devilles added.

Only the second woman hired by what was then called Philippine National Oil Corporation- Energy Development Corporation (PNOC-EDC) “in the early days of geothermal development,” it was clear even then that De Jesus was a natural leader and a trailblazer not only in the company, but also in the energy industry.

A botanical science major and later a faculty member of the University of the Philippines who once thought of taking up fine arts, De Jesus “implemented the multipleuse management principle in managing geothermal forest reservations,” believing that “[forests] should provide goods and services not only to the energy project, but [also] to the communities.”

In an email interview, De Jesus talked about how she needed “to infuse in an all-male engineering and geology team the perspective of openness and the need for continued engagement with all sectors, believing that business can learn from them.”

Her passion for stakeholder engagement made her the top choice to draft PNOC-EDC’s Community Relations policy as early as 1987, “well before ‘corporate social responsibility’ became a buzzword in business,” she recalled.

In 1988, she was cited as the Most Outstanding Employee of PNOC-EDC’s Energy I Division for her “outstanding service, integrity and professionalism.”

When they were “restive” at the onset of the environmental movement in the Philippines, De Jesus led PNOC-EDC’s initiative “to [consult] with communities early on in the process [of a project].” In 1991, this was a d o p t e d into the social acceptability policy of the Department of Env i r o n - ment and N a t u r a l Resources.

De Jesus also pioneered the use of community-based environmental impact assessments in 1993, “in order to gather indigenous knowledge and measures that are understood and… easily embraced by those who are potentially affected by the energy projects.”

Throughout her career, De Jesus was a valuable resource for government and the development sector, thanks to her work with the Department of Energy, the UN Conference on Development and the Environment, the UN Development Programme and the World Bank, among many others. She is also a sought-after speaker who has spoken at 16 foreign and 48 local conferences—and counting.

De Jesus, according to Devilles, “has board positions on international geothermal bodies. She gives her honoraria back to EDC as part of her ‘giving back philosophy.’”

More important than her accolades, De Jesus’ commitment to sustainable stakeholder engagement has enabled EDC to successfully manage and develop its engagement with host communities “totaling 18,000 households” all over the Philippines.

It was also through De Jesus’ work that the Lopez Group in 2009 launched BINHI: A Greening Legacy. A brainchild of Lopez Group chairman emeritus Oscar M. Lopez, the program aims to plant prime endangered tree species in strategic areas around the Philippines in order to address deforestation and strengthen Filipino identity in nature.

“It is not enough that we plant just any tree. We must plant trees that are native but have become rare or vulnerable, as these are also tied with our identity as Filipinos,” De Jesus had said at the launch of the program.

With her departure from EDC, De Jesus has taken on another challenge as chief sustainability officer of First Philippine Holdings Corporation (FPH).

She shared: “FPH is a champion of responsible investment through business resilience, excellent processes, exemplary environmental performance and strong community engagement [while building] on the Lopez Values. [All these, together with] good governance, innovative solutions and stakeholder partnerships, [aim] to address current and emerging issues of the company, altogether adding and creating long-term value to the company in the renewable energy sector and beyond.”

Although her legacy in the energy sector is already firmly planted, with branches that extend to her protégés and colleagues, there’s much more ahead for this doting mother of three and grandmother of one.

“Work in the energy sector is never boring,” De Jesus said. “Renewable energy is a space where [individuals] will find fulfillment because it is multifaceted. The breadth of concerns and their diversity allow [us] to be creative and innovative.”

As Agnes de Jesus forges on with her mission to steward the FPH Group’s work in sustainability, one can expect that she will inspire even more green warriors to work on behalf of Mother Earth, ushering in greener days for the country that are, in FPH parlance, “Powered by Good.” (By Niña Terol-Zialcita) 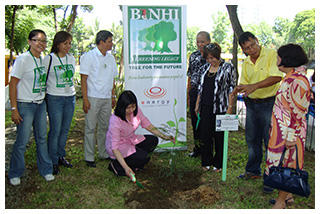