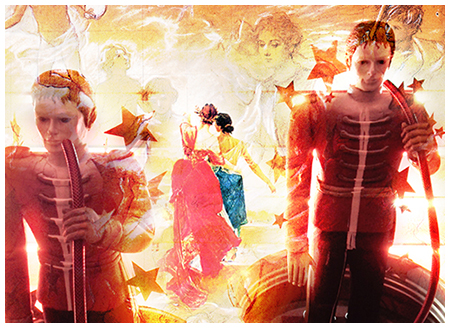 These days you can find Michael Jackson and his four doppelgangers hanging out at the Lopez Memorial Museum and Library, holding up a water hose and getting ready for a wash. An Asian Statue of Liberty is also lying about, proclaiming “It’s more fun in the Philippines. ”

They are just some of the quirky characters you’ll encounter during an afternoon at the Lopez Memorial Museum and Library.

They are a part of the current exhibition Complicated, which tops executive director Cedie Lopez Vargas’ list of reasons to drop by the museum ASAP. Complicated, she explains, will “pique visitors’ visual and intellectual curiosity through the works of Leslie de Chavez, Mike Adrao and Ea Torrado.”

The young artists had dug into the museum and library’s collections as they sought to illustrate the complex relationship between Filipinos and their colonial pasts, under Spain, the US and even Japan.

There is also the library exhibit Context which obliges visitors with a peek at the life and times of the late Dr. Rod Paras-Perez. Here’s a protip: check out the handmade mockups of his books. These come complete with illustrations and formatting, down to the drop caps—a breeze to produce when you’re armed with a computer and InDesign, but not so with pen and ink, which is what the author/critic/artist did. 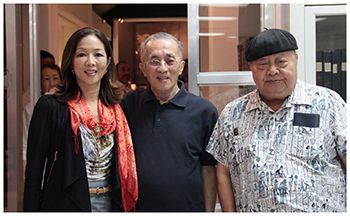 L-R: Museum executive director Cedie Lopez Vargas, Lopez Group chairman emeritus Oscar M. Lopez and National Artist for Literature F. Sionil Jose
If you’re in a reading mood on the time of your visit, you can sign up for the museum’s new membership program that allows unlimited access to the exhibitions and library, among other benefits.

The archives and the steadily growing lending library are a particular point of pride for Vargas, as they offer a wealth of resources with personal guidance from the longtime librarians, and where card-bearing members can borrow a wide range of books to take home and enjoy at their leisure, respectively.

The membership also entitles one to discounts on public programs and advance notice to activities, as well as opportunity to participate in programs not offered to the general public.

Founder’s tribute
Opened in 1960, the Lopez Museum and Library was Eugenio “Eñing” Lopez Sr.’s tribute to his parents, lawyer and Iloilo governor Benito Lopez and Presentacion Hofileña Lopez. The original museum was housed in its own multi-story building beside the Lopez home in Pasay. It was there that Filipinos were first able to see Eñing’s sizable harvest from years of collecting trips to the US and Europe: scores of Lunas, Hidalgos, Jose Rizal memorabilia, prints and rare 16th- and 17thcentury books from and about the Philippines. 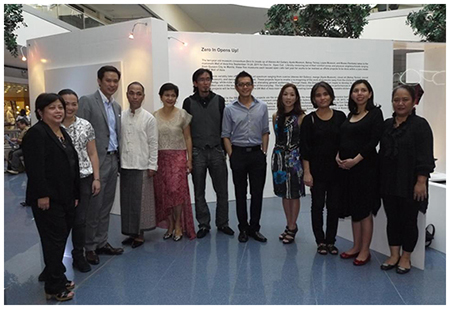 Zero In members mark the consortium’s 10th anniversary in 2011The Lopez Museum, as the country’s first privately-owned museum, thus became a valuable channel for those who wanted to learn, relearn or discover more about Filipino identity, history and culture.

Subsequent directors expanded the museum’s holdings to include maps, American historical documents pertaining to the Philippines and modern art. Trivia: did you know that the museum has works by all the National Artists for Visual Arts except Guillermo Tolentino and Abdulmari Asia Imao? On the other hand, a Napoleon Abueva is practically the first thing you will see here—the hardwood door, also known as Batas ni Kalantiaw, is a 1959 work by the National Artist for Sculpture.

Today, visitors who troop to the museum’s Benpres Building site may be anyone from students and researchers to established artists, professionals and enthusiasts, especially those yearning for a deeper understanding of the Filipino, says Vargas, who is one of Eñing’s granddaughters.

Diversified activities
Who says museums are a tomb, a dreary expanse where the most thrilling thing you can do is walk around and take selfies with priceless works of art? 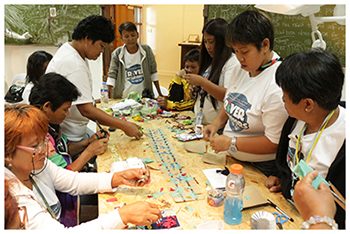 Pasig River Warriors get busy during a workshop with artist Alma QuintoWhether you’re “not interested in the museum, interested but have never visited, regular visitor, supporter or an advocate,” the museum is ready with diversified activities and both traditional and contemporary exhibitions, Vargas assures.

There are, of course, the changing exhibits twice a year where, depending on the chosen theme, a part of the collection is brought out and supplemented with works by contemporary artists.

This arrangement not only reduces wear and tear on the art collection—they are so delicate that even particularly aggressive rays of light can damage them—but is also a way for the museum to stay interesting and relevant to its public.

These themed exhibits are supported by a host of events and programs targeting various audiences, explains Administration and Education head Ethel Villafranca.

“For example, last year we had a series of lectures on Philippine art history conducted by scholars such as Alice Guillermo, Patrick Flores and Ambeth Ocampo. If that’s not your cup of tea, then we have artist talks where the audience can learn directly from guest artists their creative process, challenges and inspiration,” notes Villafranca, a former Fulbright scholar who joined the museum in 2011.

For those who are more into music, the museum’s staples include concerts on its premises, featuring the Lopez Group’s very own Orchestra of the Filipino Youth and ABS-CBN Philharmonic Orchestra, and Viva Voce.

Then there are workshops on writing, photography and visual art, poetry readings, book launches and even expos of independent/ small publishers. 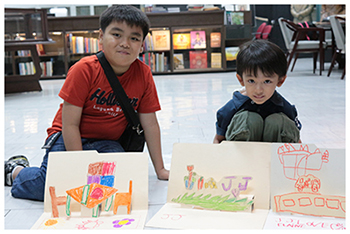 Kiddie workshop participants show off their works For Lopez Group companies and employees, the museum reserves certain perks. According to Villafranca, they conduct tours as part of the onboarding program of Energy Development Corporation, which acquaints new hires with Eñing and his legacy, and design corporate giveaways for the different companies.

Of social media and other challenges
The museum has not shied away from technology, wielding it as a tool to improve its operations and techniques in the care of collections, and in providing more ways with which to promote learning and engage with the audience.

“The Lopez Museum and Library is quite active on Twitter, Facebook and Instagram,” Vargas notes. “Social media has provided new opportunities and avenues to enhance the ways and means with which we are able to fulfill the museum’s role as steward, protector, enricher and advocate of its holdings.”

And with the planned relocation to its new home at the Rockwell Center in a couple of years, Vargas hopes a solution will be in the offing to one of the museum’s “great challenges.”

“The limited space becomes a major consideration in designing our activities, in maneuvering the spaces and in the number of works we are able to exhibit at a given time,” she reveals. “Other challenges have been in growing our audience and funding, of course.”

To deal with its “intimate space,” the Lopez Museum team designed the area to be capable of transforming to suit its needs: “Our galleries become concert venues and the library converts into a lecture and workshop space,” Villafranca explains. 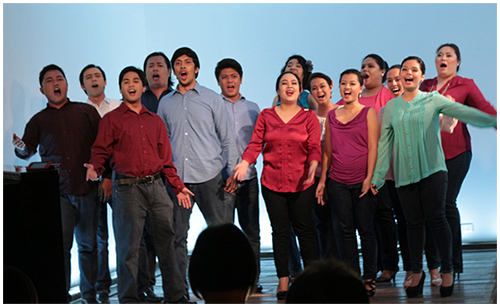 Concerts are a regular Lopez Museum offering Let’s talk relevance
According to Vargas, more than half a century after it was established, the museum remains steadfast in its mission: to allow Filipinos access to its collections, harnessing technology and riding the crest of contemporary engagement and interactive learning.

For Villafranca, nothing beats the emotional connection that happens when you see the display with your own eyes, whether it’s the museum’s pride España y Filipinas, a Manansala nude or studies of the long-lost mural Per Pacem et Libertatem, which are all currently spotlighted in Complicated.

What’s more, even in this age, there are still plenty of things that can’t be found online.

“With over 21,000 volumes of Filipiniana and hundreds of visual art pieces, not to mention the Rizaliana, cartography and pottery, there’s bound to be something that someone has yet to discover upon closer inspection and thorough analysis of the real objects. There is sure to be something here that would pique and feed your interest,” Villafranca notes.

Without a doubt, a visit to the Lopez Museum and Library is a cool and visually stimulating way to spend your P100 one of these sweltering days.