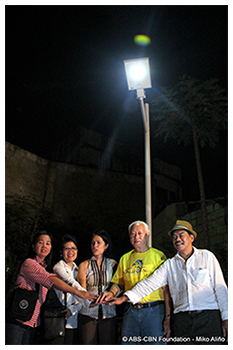 ABS-CBN Lingkod Kapamilya Foundation Inc.’s Gina Lopez with Mayor Alfredo Lim during the turnover of the Estero de Paco solar street lighting projectFor Myla, it was Milenyo all over again.

The 2006 typhoon, the strongest to hit Manila in years, had turned her neighborhood upside down, literally leaving the residents powerless for several days. She had spent the morning at work, and it was not until she reached home in the afternoon that she realized the seriousness of their situation.

By the time typhoon Glenda took a swipe at Manila with her 185 kph gusts last month, Myla and her family were more than ready with food and water rations, power packs and their Baron Solar Kit. The device, the size of a medium suitcase, packed enough juice for a few electrical necessities to keep the family comfortable and occupied while waiting for power to be restored.

The Baron Solar Kit is one of the trademark products of Adtel Inc., an offshoot of its venture into the renewable energy business some five years ago. The package, which retails for P8,000, includes a solar panel, battery and charge controller packed in a compact box as well as a cellphone charger and two energy-saving LED lamps.

The products and services of the Benpres Building-based company, however, are entrenched in a lot more places than one realizes. 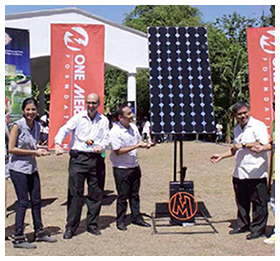 Beauty queen Shamsey Supsup, USAID’s Reed Aeschliman, One Meralco Foundation’s Jeffrey Tarayao and DepEd Sec. Bro. Armin Luistro unveil the photovoltaic system for Isla Verde schoolsAdtel provides technology solutions for a wide range of industries, from telecommunications, broadcast, renewable energy and energy efficiency, water solutions to security systems. It is in the phones and handsets we use to keep in touch with loved ones; in the mall and burger chain we frequent and the expressway we travel on, by way of its security cameras; and in the streets and offices illuminated by its streetlights. It is in the water we drink.

“Adtel stands for ‘Advanced Telecommunications,’ since we started with products and services in the telecoms and broadcasting industries. Eventually, we ventured into enterprise solutions and then solar and water,” says Adtel president and COO Andrew Ramos.

“We’re here to serve the technology needs of our affiliates, although we’re also dealing with external clients. We want to position ourselves not only as a supplier of goods and services but also as a service provider or partner,” adds Ramos, an engineer out of De La Salle University and Asian Institute of Management who joined the company in 1997. He served as head of the Telecoms Division before taking over from Regie Casas upon the latter’s retirement in 2011.

One of the company’s first major clients was Bayan Telecommunications, for which it provided telephone sets and other telephony products. ABS-CBN also contracted Adtel to be its supplier of antennas and transmitters; Globe soon followed suit, enlisting Adtel to install subscriber lines and to provide outside plant services.

But the venture that would make the company a mainstay on the pop culture radar is to yet to come.

The rise of the Baron
In 2003, Adtel introduced what would become its first commercial “hit,” the Baron Super Antenna (BSA). Pitched chiefly by the late broadcaster Ernie Baron and backed by a network of dealers and resellers, the new product became practically de rigueur among a populace still some years away from being distracted by laptops, smartphones and tablets. In fact, these days, Baron has become the generic term for TV antennas, at least among Filipinos.

“It was really ABS-CBN and its engineers that designed and developed the antenna as a solution to the signal problems the network was experiencing at the time,” Ramos notes.
When Adtel was given the job of selling these—the device was initially offered as a complement by ABS-CBN to its televiewers—it was able to move 3,000 units per month. By 2009, some 20,000 BSAs were flying off the shelves monthly. It hit the 1-million mark by end-2009.

Today, the Baron Super Antenna is a multimillion brand, Ramos says. It has become so popular that two other models designed for use in more challenging terrain were developed: the KGL (Kapamilya Gitnang Luzon) and the BXR (Baron Extended Range).

Sold on solar
2009 was another milestone year for Adtel with the release of the BSA’s “cousin,” the Baron Solar Kit, as it entered the solar business. The company was inspired to make its move following the enactment of the Renewable Energy Act of 2008. This, it states on its website, was a “response to the social and economic opportunities brought about by the challenges of climate change aligned with the nationwide thrust to promote the exploration of renewable energy sources…” 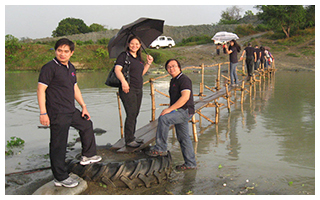 Armand Batalla, Sasa Manalansan and Japs Batara at the turnover of the solar home project funded by Age UK through the Coalition of Services for the ElderlyThe company’s catalogue of small-scale solar products currently includes the aforementioned Baron Solar Kit, solar lanterns and streetlights, and the iEnergy micro-inverter used with solar panels. Medium-scale users may also look into Adtel’s solar off-grid solutions, such as solar roof-mounts and intelligent lighting systems and fixtures.

“The ones using our products are really the people living in remote areas and those who want to save on electricity. Most of the people in the remote areas cannot afford it, but those who get it from us donate the products to remote communities. In a way, we’re supporting the CSR programs of these companies and ensuring the sustainability of the projects by providing after-sales support,” Ramos explains.

Adtel makes it easy for groups looking to embark on their own CSR projects, Ramos notes.

“There are companies that would like to have CSR programs, but they don’t know what to provide and to whom. We have offices nationwide, so if an organization approaches us and says it’s willing to fund a project, we simply ask our people to look for a beneficiary in their area, such as schools or hospitals,” the Adtel president says.

The company staunchly upholds the CSR component of its enterprise even when it engages in something more light-hearted: in its contests featured in LopezLink where the Baron Solar Kit was the prize, it would actually award two units—one for the winner and the other for his or her chosen beneficiary.

Liquid asset
Adtel’s water and wastewater solutions operations came about as a natural outgrowth of its older venture.

“We realized that everywhere we went, the people living in remote areas who needed lighting also did not have access to clean and potable water,” Ramos explains.

Summed up as “extracting raw water to treating wastewater,” the business’ initial offering is the AquaSentry portable water purifier. The technology proved its worth in 2012 when, using only two units, Adtel was able to provide potable water to some 100,000 typhoon victims in Cagayan de Oro. 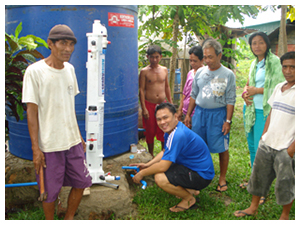 With its promise of “Your technology needs, our business,” current and prospective clients can rest assured that the farseeing 20-year-old company will be there with its evergreen menu of offerings.

“We’re here to serve the technology needs of our affiliates as well as external clients. We want to position ourselves not only as a supplier of goods and services but also as their service provider or partner,” says Ramos. “We’re focused on telecoms and broadcast and enterprise solutions but we made a stand that we won’t limit ourselves to those industries. We still want to be on top of our game and hopefully offer more solutions to the market.”