Bayan: The Indomitable spirit lives on 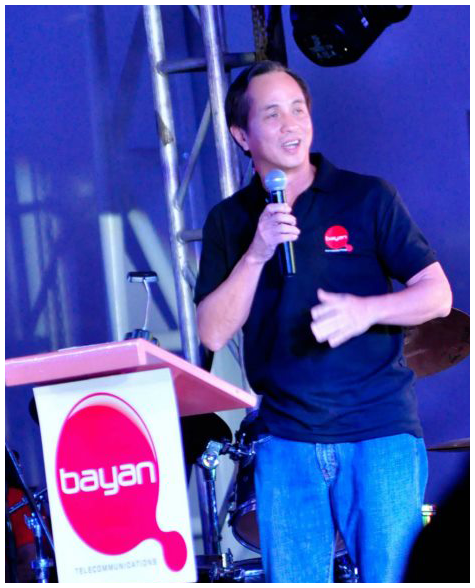 The government had just deregulated the telecom industry via two executive orders issued by then President Fidel V. Ramos. The objectives were to promote competition, increase teledensity, and modernize telecommunication service offerings. For local exchange carrier (LEC) service, or the provision of landlines, the country was divided into service areas wherein each new telco was awarded underserved and unserved areas to compete with the incumbent provider.

Each telco with an international gateway facility (IGF) was required to make available 300,000 landlines in its service areas within five years, later shortened to three years.

Bayan shareholders, led by Lopez Holdings Corporation through BTHC, infused more than US$400 million to complete its commitments under the liberalized telecom environment. In addition, Bayan used bank loans and supplier credit to build its state-of-the-art network. It made 330,000 landlines available in its service areas, 15 months ahead of the government deadline. 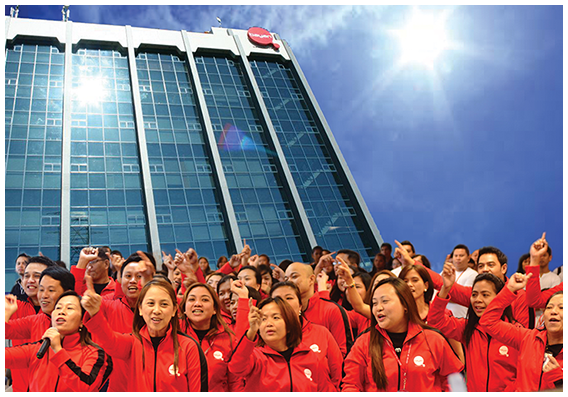 Bayan: The Indomitable spirit lives onBecause of the failure of some telco players to meet the requirements under the service area scheme, some areas were later opened to a third player. Bayan's exemplary performance in meeting the regulatory requirements for its IGF license made it the first carrier to be given access to new service areas: Navotas, parts of Manila, Caloocan, and portions of Visayas and Mindanao.

The Philippine economy was generally good from 1994 until the first half of 1997, when the Asian economic crisis set in. The crisis pulled the economy down and the local currency deteriorated against the US dollar. From around P26 per US dollar when Bayan built its facilities, the peso depreciated to over P50 per US dollar by 2000.

As it happened, subscriber acquisition and revenue performance fell below targets. One reason was the failure of regulators to enforce seamless interconnection between the new telco players and the incumbent. From 1996 up to August 2000, interconnection issues hounded the new players, affecting quality of service and hence, customer satisfaction. The issue of interconnection was only resolved after painstaking negotiations.

Another reason was the less than ideal customer mix within Bayan’s assigned service area markets. The former monopoly had historically controlled the upscale residential customers and large business markets. Bayan was left with the middle-to-lower income customers and the small-to-medium sized businesses. The skew of BayanTel’s subscriber base resulted in higher than expected delinquency.

Middle-to-lower income households and small businesses were naturally more vulnerable to a decline in consumer buying power resulting from the economic crunch. Subscriber count declined as customers gave priority to items other than telephone service in their household budgets.

While the service area scheme initially provided a rational and clean approach to the entry of new LEC players, the approach later proved to be quite limited. New players could not effectively compete with the former monopoly, which was authorized to serve virtually the whole country, including the most progressive and the most viable places in which to roll out lines.

These developments occurred within a progressively more hostile global and regulatory environment. Rates for both international and domestic long distance calls, traditionally profitable services that could have subsidized unprofitable LEC services, went on a free fall. At the same time, revenues from LEC services slowed, becoming insufficient to cover all of Bayantel’s cash requirements.

While Bayan managed to post positive earnings before interest, taxes, depreciation and amortization (EBITDA), its inability to meet market projections meant it was unable to generate the cash necessary to service its debts, which had practically doubled in peso terms.

When Bayan declared a standstill on debt payments in January 2001, the company had obligations of US$417.1 million and P2.99 billion.

‘For all you have done for me, no matter what happens, no matter where you go, you will always be my Kapamilya’; After garnering a special citation at the Gawad Galing Awards, Bayan’s 1sa Para sa Bayan employee engagement program went on to win the much-coveted Lopez Achievement Awards for Human Resource FocusASSETS

On the other hand, it had its nationwide network of satellite, terrestrial and land/submarine based cable facilities, including control of the National Digital Transmission Network (NDTN), the only major alternative telecommunications backbone in the country. It had a fixed network that included operations in provinces where it absorbed strong players such as Butuan Telephone Company, Eastern Visayas Telephone Company and Naga Telephone Company.

More important, it had its people, committed to turn the company around and deliver on their service commitments to their customers. Despite the company’s financial difficulties, the Bayan workforce remained doggedly determined to provide the best services their customers badly needed.

Bayan’s court-assisted financial rehabilitation was finalized in 2004, with the approval of a sustainable debt level of US$325 million, payable over 19 years. It was found to be a viable company, capable of supporting its own operations, as well as fund a moderate amount of capital expenditures. While its LEC network was underutilized, it could generate funds to grow its data business, which was expected to continue growing as demand for internet connectivity and outsource business continuity (back-up telco services) rose.

As the maverick provider of fixed lines, Bayan actually succeeded in carving a niche in dedicated leased lines and other managed data services. It was unable to participate in the highly lucrative mobile phone business when its license to offer wireless services, awarded in 2000, was questioned before the courts. The case remains in litigation.

Nonetheless, Bayan found its strongest suit in customer service and market research, carefully listening and becoming the most responsive among landline and internet access providers.

Its money-back guarantees for service interruptions that lasted over 24 hours, or new service installations that took more than three days, shook the market in 2006 to 2008. Had regulators made the Bayan offering the industry standard, operating costs would have skyrocketed and bigger telcos would not have been able to cope, given their much bigger subscriber counts.

Bayan was only able to introduce such offers through the dedication of its employees, who prided themselves with being able to differentiate themselves and the company through thoughtful service and exceptional care. Survey after survey found Bayan customer service to be superior compared to industry norms.

The introduction of Lola Techie, the internet-savvy, tech-loving grandma, as the face of Bayan services in 2009 further boosted Bayan’s maverick image, reaching out to the untapped senior market and gaining residential subscribers among extended families who wanted to stay in touch with their kin. Bayan’s Lola Techie campaigns were recognized with consecutive industry awards in the fields of public relations, marketing and advertising.

CHANGE IN THE HORIZON

In 2012, Globe Telecom, Inc., the country’s leader in postpaid mobile telephony, completed a successful tender offer for all outstanding Bayan debt. In 2013, Globe converted a portion of this debt into a minority interest in Bayan.

It was not the first time that Globe tried to form an alliance with Bayan. There were several earlier attempts to find synergy between the two companies, with Bayan proving to be attractive because of its unused mobile phone frequency and its motivated workforce, who were used to “doing more with almost nothing”, in the words of Carlo L. Katigbak, BTHC managing director.

The last couple of years proved to be the right time. Globe’s entry accelerated the financial rehabilitation of Bayan, making it financially stronger and enabling it to meet its business targets by delighting its customers, “as usual”. Bayan remains strong in the outsourcing and offshoring business segment, and is the industry model for superior customer service.

The entry of Globe is seen as a positive move, which will strengthen Bayan, help unlock its full potential, and ensure its competitiveness and survival.

As the company gears for a new phase of change, Bayan chief operating officer Rafael T. Aguado gives tribute to the employees who have carried the company through the best and worst of times. 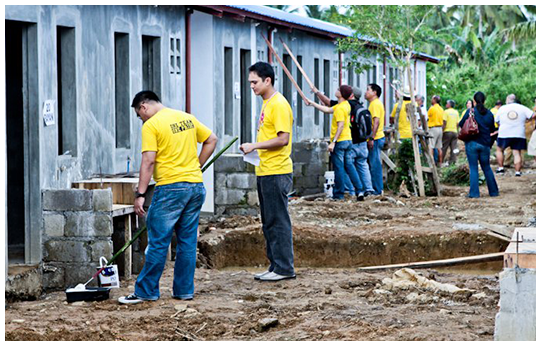 With good corporate citizenship being a trademark of a Lopez company, Bayan knows how to pay back the local community it serves by taking part in noteworthy CSR projects like the Gawad Kalinga program in Tacloban CityAt their 2013 Gawad Galing service awards, Aguado said, “Bayan is actually rich. We have an abundant supply of great people. We are wealthy in terms of breeding a legendary workforce who, day-in and day-out, year-in and year-out, go above and beyond what is expected, so we can continue to fulfill our mission of improving the lives of the Filipinos...Being a legend means having done something with your life that has changed the people around you, inspired many around you, and accomplished what is perceived to be difficult or even impossible. At Bayan, you can see legends at work. As a collective people, Bayan legends are those who see the need to go against the odds, to travel the road less travelled, and even the road never before travelled.”

Since Aguado joined Bayan in 2011, he has been continually amazed by the dedication, creativity and commitment of his fellow Bayan team members. “I am thankful for Bayan’s indomitability. I have been very fortunate to have many blessings in my life. And one of the top things I am personally grateful for is the opportunity to serve as Bayan COO and work with an organization that is full of kasadong individuals. I am thankful for the chance to do my part as a leader, achieving unbelievable things together with my teammates,” he said.

Carlo Katigbak likewise pays tribute to Bayan employees, for their steadfast dedication, even in the face of severe difficulties. He quips, “let us put this excellent attitude into a bottle, and spread it throughout the Group!”

In 2013, Bayan’s indomitable spirit as a company was bestowed with a Lopez Achievement Award which recognized the company for living the bayanihan spirit.

Bayan chairman Eugenio “Gabby” L. Lopez III, said in a recent talk to the employees, “Bayan is a special company to me because in spite of all our adversities, I have always been able to count on all of you to stay loyal, to persevere and deliver unimaginable results.”

“I want to express my deepest thanks for standing by me even as we went thru our most difficult times. I could not have asked for a more loyal, a more passionate and a more dedicated group of people to work with. Thank you for being MY Kapamilya. For all you have done for me, no matter what happens, no matter where you go, you will always be my Kapamilya,” says EL3.

Among telcos, legacy refers to old or outdated networks or technology that can no longer be used efficiently. Bayan will never be called legacy because of the legendary tenacity of its people to compete fairly and with honor. And that is how the Bayan legend will continue to be told, nurtured by a singular set of values that have carried it through the best and the worst of times.

The Bayan indomitable spirit lives on.