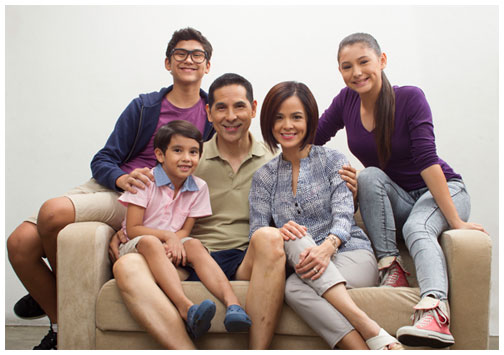 A little over two decades of commercial operations saw SKY going from innovation to innovation. Not only was it considered the country’s first commercial cable TV company—it was also the first Philippine provider to offer prepaid cable TV services and the first to go the digital route.

Now, the company delivers the wows and dispenses saya with its 191 channels, customizable plans and premium Pay-Per- View and Free View offerings.

In short, it’s all about providing digital cable TV the way consumers want it.
Leveling up for the customer
SKYcable has made great strides in the past couple of years, with much more robust offerings in terms of its channel lineup as well as its Pay-Per- View and Free View offerings.

Its roster of channels has risen to 191, 46 of which are high- definition (HD) channels. HD television, at 720p to 1080i and higher, offers clearer and more detailed images compared to standard-definition (SD) television’s 480i. (The numbers refer to the “active lines of information” that are filled with frames of video, while “p” and “i” stand for progressive and interlaced, the manner in which these lines are loaded.) Due to its much higher resolution, HD viewing is comparable to watching a movie inside the theater. This was followed by the introduction of the Dual Def plans that combine SD channels with HD channels. There are currently four such packages on offer: Dual Def 499 with seven HD channels; Dual Def 999 with 14 HD channels; and the Dual Def Titanium HD 30 and Dual Def Titanium HD 40 with 30 and 40 HD channels, respectively. 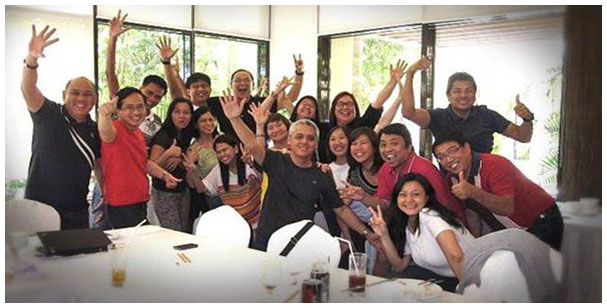 SKY guarantees 'Wow at Saya' “We felt it was a good idea to introduce plans that meshed SD and HD channels as subscribers were given the easy access to appreciate the unparalleled viewing quality offered by the latter. We’re happy to say that more and more people are now able to experience HD,” says SKYcable marketing head Alan Supnet.

Within a little over a year, SKYcable was able to grow its HD subscribers to about 65,000, adds Supnet.

“It used to be that only those living in the provinces could watch Sinulog and all these other festivals. We showed them live and via HD feed a national scale. SKYcable customers were very appreciative since they were not aired anywhere else,” Supnet says.

“There is much local content out there that we’d like to put on Free View,” agrees programming head James Dumlao. “Not everyone can travel to where the festivals are, but if we make them available in the homes, then that makes them interesting to a lot more people.”

Pay-Per-View, long the domain of boxing, UFC and other sporting events, has branched out into broadcasting concerts, movies and music festivals in a bid to lure the lucrative youngadult market. Recent SKYcable PPV events include the concerts of Vice Ganda and Daniel Padilla and Enrique Gil as well as the Himig Handog songwriting tilt.

SKYcable remains at the top of the heap when it comes to the breadth of its channel lineup. Coupled with the Select a la carte service which allows its subscribers to add channels and packs on top of their basic plan, customers are guaranteed a subscription package that features the channels that they and their family actually want or watch.

SKYcable is also the pioneering and only provider of the iRecord personal video service, which gives subscribers the power to enjoy the most in life by enabling them to pause, record and rewind live TV.

Viewing on the go 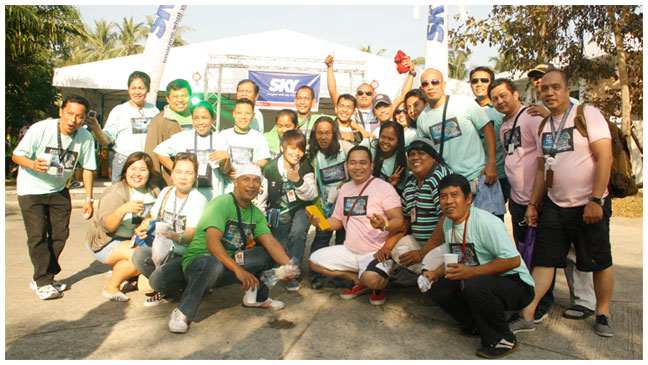 The Sales Team having a blast at the sales rallyStarting this March, SKYcable delights subscribers with yet another treat—the broadband streaming service HBO GO which showcases the wide library of blockbuster TV series such as “Game of Thrones,” “Girls” and “Veep,” among others.

With HBO GO, users will get unlimited access to over 1,000 hours of HBO original TV series, movies, documentaries and even behind-the-scenes content on their computers, tablets and smartphones—anytime, anywhere.

“The proposition of the HBO Go platform is that programs are uncut and new shows are available on HBO GO 12 hours after their US airing,” says Dumlao of the groundbreaking partnership with HBO.

Speed already a given
With speed seen to become a basic requirement in the broadband wars, SKY seeks to distinguish itself from the pack by replicating the SKYcable experience on SKYbroadband. 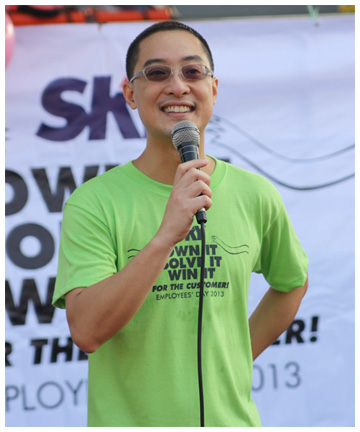 CEO Carlo L. Katigbak during the Employees' Day celebration“The focus will be on SKYcable’s proprietary channels and the ABS-CBN connection. In a nutshell, what SKYbroadband will bring to the table is exclusive content on customers’ PCs in the fastest way possible,” Dumlao sums up.

“All providers will really need to be able to provide the fastest speed to their subscribers, coupled with stability and consistency. That’s why fastest online access to superior and exclusive shows and programs will truly play a major role in our proposition for SKYbroadband,” states Supnet.

“Content is and will remain one of our key strengths,” stresses Dumlao.

Filled with ‘wow at saya’
Call it icing on the cake, but signing up for SKYcable and SKYbroadband promises to be a “wow at saya”-filled experience in view of the company’s renewed emphasis on customer focus.

This, even as Supnet and Dumlao promise more surprises for SKY subscribers in the future.

“We’ll make it even more exciting. The way to go is really to be able to offer both cable and broadband the way they, the customers, want it. They can expect a lot more from SKY moving forward, both in the broadband and pay TV arenas,” says Supnet.

Adds Dumlao: “At the end of the day, people subscribe to cable TV because of the number of channels that’s offered. We will continue to give them the widest choice as well as the content that matters to them, content that will be relevant not only to the subscribers but also to the communities that we serve.”

For her part, AR Ticzon, Organization Development and Learning senior manager of SKY, affirms that the company aims to go beyond simply providing or selling a service.

“We want to delight and wow our customers and for us to be able to do that, we continue to nurture a workforce that is empowered to make the customers happy, consistent with our core values of customer focus, accountability, results orientation, ownership, teamwork and integrity,” Ticzon says.

With “wow at saya” enshrined as a way of life among its employees, the company is expected to emerge as top of mind when it comes to customer service to the point that subscribers will come to the company even if their concern is not related to any of SKY’s own products and services.

“They will come to us because they have a relationship with us and they’ve made SKY so much a part of their families, thus ‘wow at saya para sa kapamilya, in the service of the Filipino,’” Ticzon says. 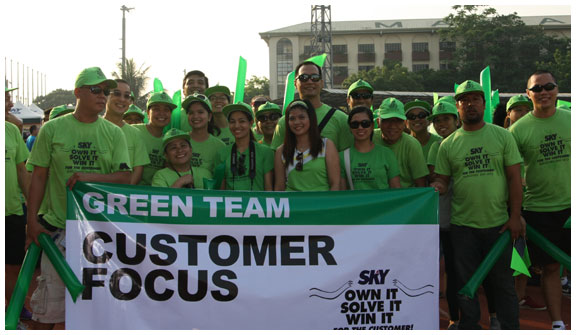 Posing for a group picture during Employees' Day 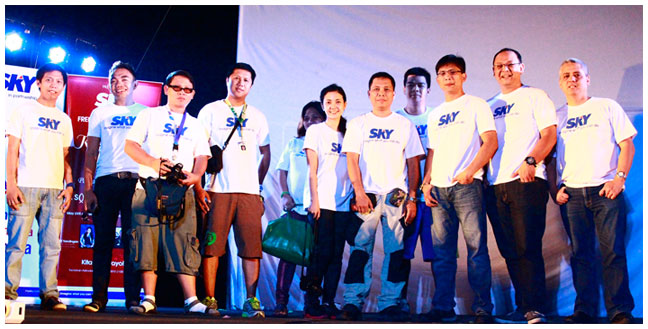 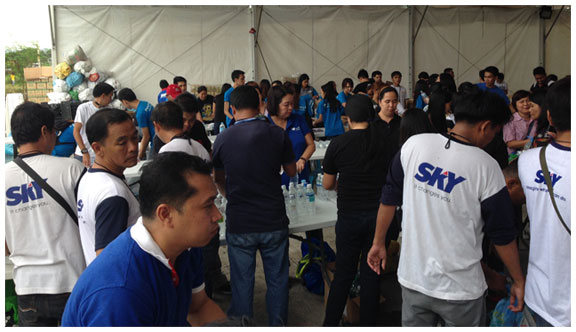 SKY helps in the repacking of goods for the Yolanda victims 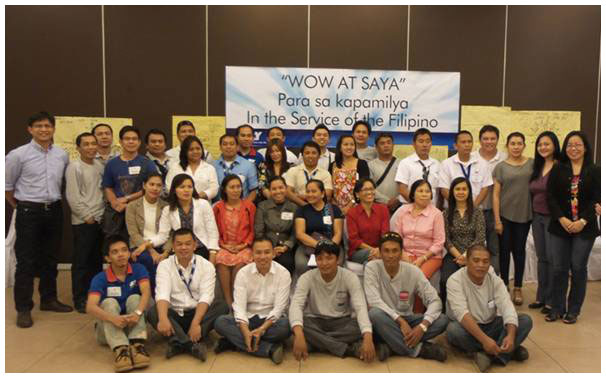 Davao employees during one of the wow and saya session