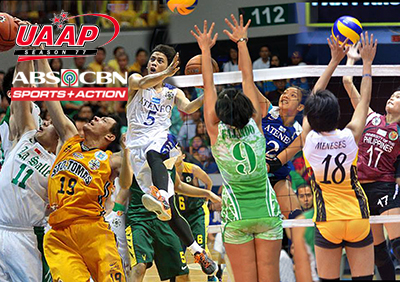 Why a sports channel, when you had Balls on SKYcable and even Channel 2?

As it explains on its website: “Sports will always be a part of the Pinoy lifestyle. Our competitive instinct has led us to countless victories in the international scene.

This unwavering passion is the driving force behind ABS-CBN Sports+Action, a free TV channel that serves as your primary go-to hub for all the sporting events you care about.”

ABS-CBN Sports+Action filled the void for a free-to-air dedicated sports channel, Balls being a cable channel and the now defunct Studio 23 more of a general entertainment channel with a bit of sports thrown into the mix, explained March Ventosa, head of ABS-CBN’s Narrowcast group, told LopezLink in an interview.

“We had enough original local sports content that we could actually put in a channel, so we said, why don’t we make best use of these and create a platform where we can promote sports development as part of our mission,” he said.

According to Ventosa, the network had several things going for it as it hatched plans for ABS-CBN Sports+Action as early as two years ago.

It had built up a solid relationship with local partners such as the University Athletic Association of the Philippines (UAAP). It also boasted a healthy portfolio of sports programming, both local and foreign, including the National Basketball Association (NBA), boxing promoter Top Rank, the homegrown ALA Boxing Group and the Azkals, the national football team. 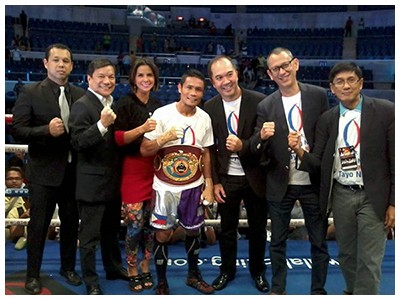 The ABS-CBN Sports team with boxer Donnie Nietes and ALA Promotions’ Michael Aldeguer“We said yes, this is the right time to do it,” recalled Ventosa, a former Hemisphere Leo Burnett Advertising managing director who joined ABS-CBN in 2006 as head of Corporate Marketing.

The task of running ABS-CBN Sports+Action went to channel head Vince Rodriguez, a longtime Kapamilya who  joined ABS-CBN straight out of college in the mid-1990s. With his experience as writer, executive producer and eventually head of the old Studio 23, Rodriguez is raring to go to bat for the next big thing—volleyball— and other ABS-CBN Sports+Action offerings.

“Beyond just airing them, we need to make our audience and advertisers more excited about our other sports properties, particularly football and volleyball. I think we’ve been successful in volleyball because it’s gaining a following,” Rodriguez stated.

For Dino Laurena, creating a home for the ABS-CBN sports brand on free TV gave the network a first-mover advantage: “We can attract not only the TV audience but also the sports property owners who are looking for a platform for which they can broadcast their property,” said the head of Integrated Sports, the new group tasked to develop ABS-CBN’s sports properties.

More than that, the audience benefits from being exposed to the “wider variety of sports categories as well as the values that sports allow us to experience,” stressed Laurena, who joined ABS-CBN after retiring from UniversalMc- Cann as its managing director less than two years ago.

‘Kapitan’ sets his sights on UHF 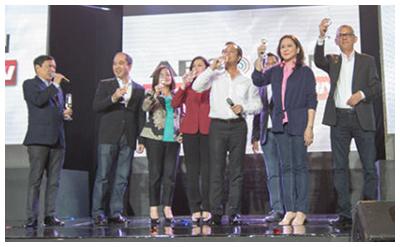 In March 1986, Eugenio “Geny” Lopez Jr.—also known as Kapitan—gathered a band of his former executives to rebuild ABS-CBN, one of the valuable Lopez assets that was seized and plundered during the martial law regime.

Some 200 longtime employees threw in their lot with the faltering channel, putting in countless hours to propel ABSCBN back to the No. 1 position. By 1988, its 15.2 rating and 28 audience share had decisively beaten GMA’s 13.0 and 24, reported Raul Rodrigo in the book “Kapitan.” Half of the country’s top 20 primetime weekly programs that year, moreover, were ABS-CBN productions.

But Kapitan was not done yet. With ABS-CBN once again ruling the airwaves and the cable TV operations safely off the ground with the establishment of SKYcable in the mid-1990s, he set his sights on UHF.

He set up Channel 23 and with then EVP Freddie M. Garcia, put together a team to run the new channel: Manuel Quiogue as managing director, Leo Katigbak (now head of the Content Management Group, Film Archives and Special Projects) who took over upon Quiogue’s retirement in 2001, and Carandang’s son Dennis as engineering head.

Back in those days when cable TV was the paramount entertainment source, Studio 23, as the new channel was called, became go-to place for American TV fare among ‘90s kids and millennials, with shows like “Alias,” “Dawson’s Creek,” “Charmed” and “Seventh Heaven.” The lineup was boosted by a handful of local shows as well as UAAP and NCAA basketball games—foreshadowing its future as a channel dedicated to sports.

By 1999, three years after it first went on air, Rodrigo wrote, the upstart channel had broken even with earnings of up to P70 million a month. It had also overtaken channels 4, 9 and 13—all VHF stations—to become the country’s No. 3 channel.

On January 18, it was time for a whole new ballgame.

What’s on the calendar

In addition to the ongoing 2014 FIFA World Cup—ABSCBN was the first Philippine network to air one of the world’s most watched sporting events in full in 2010—ABS-CBN Sports+Action’s calendar is pretty much filled up for the rest of the year, channel head Rodriguez said. 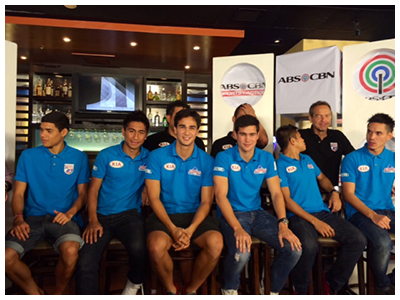 The Azkals fresh their AFC Challenge Cup stintWith the 2014 NBA championship trophy in the hands of the Spurs, the ball will soon be on Gilas Pilipinas’ court as it tries its luck in the International Basketball Federation (FIBA) Basketball World Cup in Spain this August.

Meanwhile, after the Asian Football Confederation Challenge Cup in May where the Azkals finished in second place, fans will be in for more pitch action as ABS-CBN Sports+Action trains the spotlight on the Philippine Peace Cup in October and the 2014 ASEAN Football Federation Suzuki Cup starting in November.

Gladiators from the ALA Boxing Group’s stable show off their speed and cunning in the bimonthly “Pinoy Pride,” while international boxing is represented by the weekly Top Rank matches. Mixed martial arts enthusiasts, on the other hand, can have their daily fill of Ultimate Fighting Championship events during the late-night slot.

To provide a break from the adrenaline rush, roughly a quarter of the channel’s programming is turned over to movies, entertainment and newscasts, particularly “News +” and “The Score” presented by Anthony Taberna and TJ Manotoc, respectively.

Of course, this time of the year is synonymous with the UAAP and collegiate basketball, volleyball and football. This July, expect to see old rivalries flare up as fans dust off their foam fingers and reprise the familiar chants when UAAP Season 77 begins on July 12.

By December, the best collegiate liberos, hitters and setters will bring the thunder as UAAP volleyball games get under way, alternating with football matches.

For next year, boxing and football will be the sports events to watch on ABS-CBN Sports+Action. 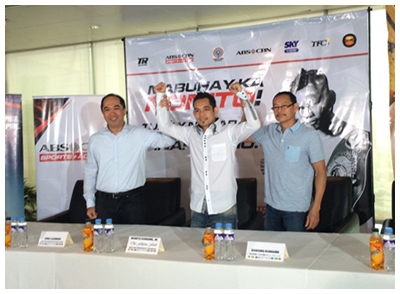 Welcoming the “Filipino Flash” Nonito Donaire (center), whose world featherweight title fight was aired on ABS-CBN Sports+Action
“It will be a big year again for boxing, with Nonito Donaire, Donnie Nietes and Manny Pacquiao as well as the ALA boxers gunning for new achievements, while in football the Azkals have ranked themselves up in the Challenge Cup. Of course, the NBA will always be exciting and the UAAP keeps hitting new highs year on year. But watch out for boxing and football,” Ventosa promised.

With only six months on air under its belt thus far, ABS-CBN Sports+Action may have only gotten started, but it stands firms on its commitment to put forward the best and most relevant sports content for the Filipino audience, Ventosa said.