What you should know about Pope Francis' PH visit 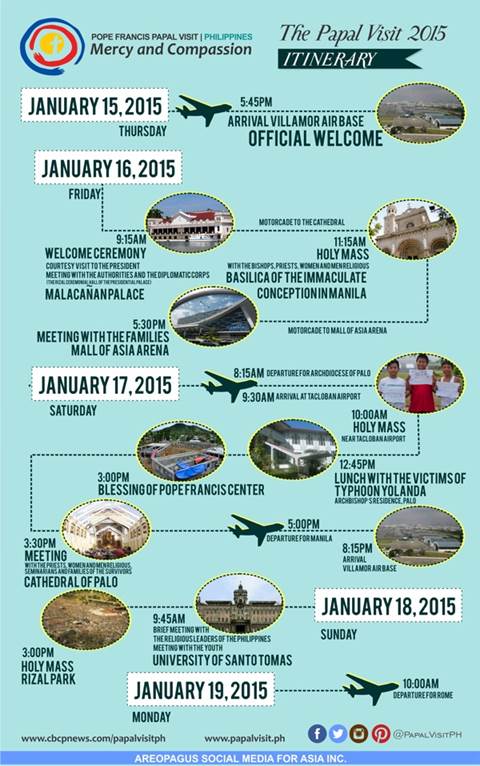 Image from papalvisit.phCatholics across the Philippines are gearing up for the historic visit of Pope Francis, the third pope to visit Asia's bastion of Catholicism.

But just how big are the government and the Vatican's preparations for what could be perhaps one of the biggest trips of the ''People's Pope'' since he assumed his title?

In an interview on ANC's "Beyond Politics", Ambassador Marciano Paynor, a member of the papal visit central committee, shared information about the upcoming visit of Pope Francis.

Paynor said one of the requests of the Vatican was for the Pope to ride a car that was made by a Filipino manufacturer. ''What they wanted was a vehicle that as much as possible made by a Filipino company, but since we did not have a car manufacturing company, as long as the dealership was owned by a Filipino then it was alright,'' Paynor said. Aside from the car that will ferry the Pope from one place to another, Paynor said the Pope, like in his previous visits to other countries, wants an open and non-bulletproof "popemobile" that will allow him to interact with the crowd.

Since Pope Francis' visit is both considered Apostolic and State in nature, protocol suggests that he, as a visiting head of state, should conduct a review of troops, Paynor said. Paynor, however, said ''in order to downplay the military nature of the welcome ceremonies, the inspection of troops is waived. That shortens the ceremony considerably." Paynor noted the visit to the Philippines of then Pope John Paul II in 1995 was not a state visit, as his purpose of being in the Philippines was to attend the World Youth Day.

3. Pope wants to stay at the Apostolic Nunciature

Paynor said the Philippine government offered a different place where the Pope could stay in Manila, but the Vatican said His Holiness has chosen to stay at the Apostolic Nunciature to the Philippines, located on Taft Avenue in Manila. ''Of course as a good host we offered hospitality as we would to any visiting head of government, but they declined and said they would prefer to have the Pope at the nunciature,'' Paynor said.

4. No banquet for Pope Francis

Paynor said learning from the lesson of the 1995 visit of then Pope John Paul II, the Philippine government has created more concrete barriers that will ensure the on-time arrival of Pope Francis to his destinations following a motorcade. ''We need physical barriers…so that we can control the forward rush of the people,'' Paynor said. Nonetheless, he said the government recognizes that the Filipino faithfuls cannot be stopped from approaching the Pope. ''You couldn’t push them in the normal way you would push people out. They didn’t see us. They only saw the Pope. Everyone was in awe,'' Paynor said, referring to his experience of coordinating the 1995 papal visit. "Even the policemen who were supposed to be managing the crowds were also putting up their arms,'' he added. Paynor said Pope Francis's open motorcade will be a logistical challenge, but he said parishes around the country were already told to appeal to churchgoers who will attend the papal motorcade to practice discipline. ''In our case, there is that natural tendency to move forward, and so we've convinced our brother priests to inform the parishioners that they will be blessed but they should help control or manage the crowd,'' he said. ''We are trying to ensure that at least the front row should be managed by people who have been told this." According to the Department of Public Works and Highways, some 23,000 concrete barricades would line the route to be taken by the papal convoy around Metro Manila.

Paynor said the Philippines had expressed interest to have Pope Francis visit the country upon his inauguration as the Supreme Pontiff. He said while Pope Francis' main reason for being in the Philippines is to visit the victims of ''Yolanda'', the invitation was already extended prior to the onslaught of the super typhoon. ''From day 1 we would have wanted for His Holiness to visit the country. So the invitation was always open,'' he said. Paynor said the Philippines has prepared enough for this historic event. ''The government had weeks of preparation and scenario-building and trying to provide solutions to various scenarios. All I can say is we are preparing ourselves as much as we could, but I don’t think any country (preparing for a papal visit) can say for sure that they are 100% ready,'' he said.

The Pope will arrive in Manila on January 15, 2015 on board the Sri Lankan flag carrier. He will be welcomed personally by President Benigno Aquino III. The following day, the Pope will pay a courtesy call on Aquino in Malacanang. He will also celebrate Mass at the Manila Cathedral, then meet families at the Mall of Asia Arena in Pasay City. On Saturday, January 17, Pope Francis will visit Leyte, where he will celebrate Mass near the Tacloban Airport, as well as meet survivors of Typhoon Yolanda. He will return to Manila and meet the youth and religious leaders at the University of Santo Tomas on the morning of January 18. In the afternoon, he will celebrate Mass at Luneta. Millions of Catholics are expected to attend this Mass. The Pope will leave for Rome on January 19 on board a Philippine Airlines (PAL) plane. (Source: Dharel Placido, ABS-CBNnews.com)