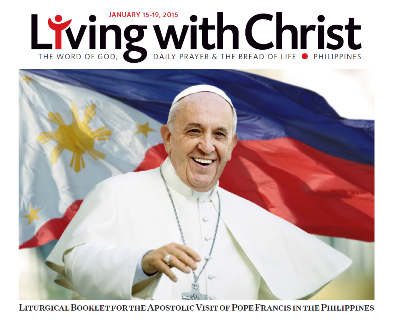 Liturgical Booklet for the apostolic visit of Pope Francis in the PhilippinesThe Catholic Church has published the online booklet containing the liturgical celebrations to be presided by Pope Francis during his visit to Philippines on January 15 to 19, 2015.

The booklet contains messages from Cardinal Luis Antonio G. Tagle, Catholic Bishop Conference of the Philippines (CBCP) President Archbishop Socrates Villegas, Arbishop John Du and Apostolic Nunio to the Philippines, Archbishop Guiseppe Pinto. The liturgical texts have been published with the consent of the Episcopal Commission on Liturgy of the CBCP. Also included are some notes regarding the different activities of the Pope’s visit such as the mass for priests and religious, encounter with Families, mass at Tacloban, encounter with the youth and the concluding mass which is to celebrate the Feast of the Sto. Niño.

Cardinal Tagle in his foreword said ‘May this guide ..help us truly encounter the Lord whom we worship, and having been touched by the mercy and compassion of God which Pope Francis brings, may this visit lead us to spiritual renewal, conversion of heart, and transformation as a Nation.”

The Pastoral Liturgical Guide for the 2015 Papal Visit in the Philippines was borne out of the generosity of Living with Christ and Prions en Eglise subscribers worldwide, Bayard Presse and the Augustinians of the Assumption through their International Solidarity Fund.