ABS-CBN TVplus The Mahiwagang Black Box UnveiledFor years, kapamilyas have been intrigued by the “mahiwagang black box” that DZMM radio anchors Ted Failon and Jowie Rebate have been giving away every morning on “Failon Ngayon.”

Now, the elusive box can now be formally unveiled, and it’ll open you up to TV like you’ve never seen or heard it before!

This is the guarantee of ABS-CBN Digital Terrestrial Television (DTT) as Pinoy televiewers start to make the exodus from analog TV to digital TV beginning this year.

The Kapamilya network is once again the first out of the gate with its DTT brand called ABS-CBN TVplus, set to be launched on February 11 with Pop Princess and “The Voice of the Philippines” coach Sarah Geronimo as endorser.

DTT is a technological evolution that uses digital signals for broadcast. 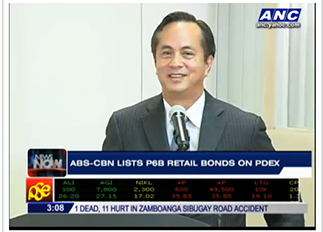 Chairman Eugenio Lopez III says in an interview on ANC that ABS-CBN has first-mover advantage in the DTT raceFor DTT head Chinky Alcedo, the release of the implementing rules and regulations (IRR) for DTT in December last year by the National Tele communications Commission (NTC) came as a “great yearender.”

Indeed, Christmas came early and perhaps unexpectedly for the almost 100-strong DTT group. The announcement of the guidelines capped almost a decade of back-and-forth that began in mid-2007 when broadcasters such as ABSCBN were first allowed to test their systems in preparation for the digital switch.

The Philippines decided to go with the Japanese Integrated Services Digital BroadcastTerrestrial (ISDB-T) platform in late 2013, but not before flip-flopping between it and Europe’s Digital Video Broadcasting-Terrestrial.

In the end, ISDB-T won out, chiefly because of its affordability and emergency warning broadcast system (EWBS). 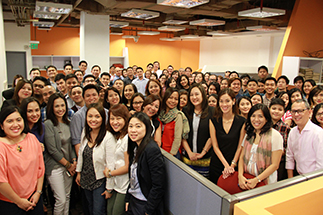 The entire DTT team up closeHere’s how EWBS works, according to Alcedo: in case of emergencies, such as quakes or floods, the government will alert the broadcasters, for example ABS-CBN, to set off the emergency warning system. People will receive the warning through their set-top boxes— a.k.a. the “mahiwagang black box”—which will then display the information on the TV sets. This feature will be activated once the government is ready with the system.

As ABS-CBN chairman Eugenio Lopez III told The Philippine STAR in early 2014: “…We placed our bets early and have already invested in this standard. We are probably three years ahead of everybody else in terms of rolling out digital TV, so this should give us first-mover advantage as the country transitions from analog to digital.”

Meanwhile, households can prepare for the big switch by purchasing an ABS-CBN TVplus set-top box which will work with any TV model with RCA input. 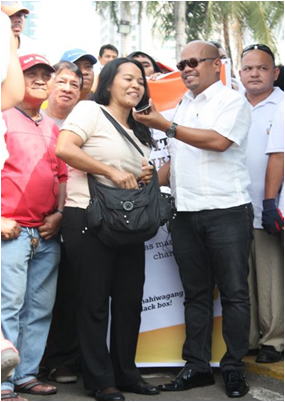 Jowie Rebate and Ted Failon have been the pioneers in seeding the 'mahiwagang black box'Providing inspiration, innovation

As the pioneer group tasked with introducing a breakthrough service, ABS-CBN’s DTT division has made it their mission to “provide Filipino families and communities with relevant experiences of inspiration and innovation in their daily lives through our purposeful work and excellent digital content and services, thus significantly contributing to overall ABS-CBN business growth,” says Alcedo.

ABS-CBN TVplus holds out the promise of changing the way Filipinos look at TV, and Alcedo says it works both literally and figuratively.

“It’s literal in the sense that it will change from analog reception, which is cloudy and snowy, to crystal clear images and sound. At the same time, it’s an innovation that will open up new worlds to viewers because of the content from four additional channels that we are carrying on DTT. Magbabago ang tingin n’yo sa TV n’yo!,” Alcedo promises, quoting the ABS-CBN TVplus tagline.

The new channels illustrate how ABS-CBN TVplus strives to strike a balance between educational and entertainment offerings as encouraged by ABS-CBN president Charo Santos-Concio, notes Alcedo. 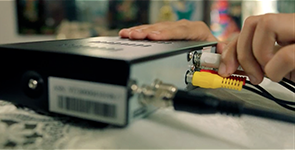 The DTT device is as easy as ‘plug and play'The idea of plunking down a one-time affordable amount for their own “mahiwagang black box” and then turning on their television sets to find that CineMo, Yey, DZMM TeleRadyo and Knowledge Channel are now a part of their regular TV fare has been a source of wonder to households that already have been testing DTT.

“They couldn’t believe it. ‘What do you mean, I have these channels without paying a monthly fee? Are you sure?’ There was a bit of skepticism in the beginning. Once they understood how it works—‘Ah, kinakabit lang pala ang box’ or ‘Dyan pala nakukuha yung reception’—it really changed their whole perspective,” Alcedo shares.

“In some households, they’re saying it changed their lives. They stay home more often and watch it, especially the husband who is glued to CineMo. You can see the effect in the ratings. It’s exciting,” the DTT chief adds. 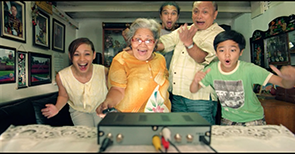 Transformational experience for the Filipino familyPlug and play

For homeowners, going digital is a painless process that entails nothing more strenuous than paying for the set-top box and attaching it to one’s TV set—even if it’s an early TV model with the jutting-out back.

On ABS-CBN and other broadcasters’ end, they will need to simultaneously broadcast both digital and analog signals within the first year of the implementation of the IRR as part of the migration plan. Once all households are digital ready, the analog shutoff will eventually be implemented.

The first phase of the migration plan will cover the National Capital Region, followed by provincial networks. In all, the transition will take about five years, according to the NTC. 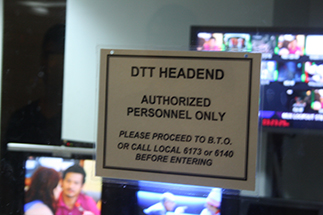 Operations at the DTT HeadendD-Day

“It’s a very busy time because the IRR came out on the last work week of 2014, so through the holidays our operations have been ongoing in the sense that we’ve been kitting the boxes, getting the backend ready and, of course, the channels have been ready for the longest time,” Alcedo says of the last few weeks before DDay.

With several years of laying the groundwork and billions of pesos invested in the new service, the programming honed and ready to go, and a host of launch events to drumbeat ABS-CBN TVplus, the wait for the “mahiwagang black box” will surely be worth it!