Estero de Sampaloc before the clean-upSixteen esteros in Manila and Quezon City are being rehabilitated by ABS-CBN Foundation Inc.’s Kapit Bisig Para sa Ilog Pasig (KBPIP) and the Pasig River Rehabilitation Commission (PRRC) this year through the help of the supporters of the annual Run for the Pasig River, private donors and government agencies.

KBPIP and PRRC target to complete the cleanup in San Francisco, Culiat and Pasong Tamo Creeks in Quezon City by next year.

A long-term and more aggressive campaign for cleaner waterways in Metro Manila is set in the upcoming 10.06.2013 Run for the Pasig River to be held at the Quezon Memorial Circle on October 6. 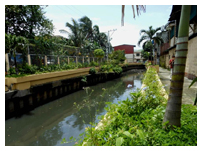 The estero after the on-going clean up“…If you want a country which is clean and beautiful, communities in love, peace and harmony, and our rivers that are clean and not smelly, come and run on that day. Make a statement, wake up early and run with the rest of us and say we want the Pasig River clean. And if you do this, we will clean that river,” said Lopez.

This year’s Run for the Pasig River is the Quezon City leg of One Run, One Philippines, ABS-CBN’s simultaneous advocacy run in celebration of its 60th anniversary. Other legs will be held in Cebu, Davao, Bacolod and Los Angeles, California.