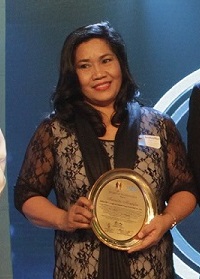 Isabelita Montifar resource mobilization officer of Bantay Bata 163Leading the Yolanda honorees were six individuals whose acts of bravery, courage, leadership and selflessness made a significant positive impact on the relief and rehabilitation efforts mounted for victims of what was believed to be the strongest typhoon to hit landfall in recorded history.

Isabelita Montifar of ABS-CBN Lingkod Kapamilya Foundation, Inc. (ALKFI) is the resource mobilization officer of Bantay Bata 163. Her job is to find donors for the Children’s Village, a place which houses abused kids rescued by Bantay Bata. But after Yolanda hit, all hands were directed toward relief efforts and Montifar obliged, despite being over 50 years old and already experiencing some body aches.

She first went to the Pinoy Big Brother Warehouse to manage volunteers and the food committee. Later, she flew to Cebu to assist ALKFI relief operations that was sending goods to Leyte, as well as on ground relief for Yolanda victims in Cebu province. She made the Cebu Bantay Bata 163 office her home base, radiating a generosity of spirit that uplifted volunteers, social workers and victims alike.

Angelo Angolo, public service officer of the Regional Network Group of ABS-CBN Corporation, was pulled out from month-long relief operations for earthquake victims in Tagbilaran City, Bohol, to assist in the Yolanda efforts. He first went to Bacolod and supervised the command center for two days. In Iloilo, he met with the army to airlift goods to five remote island barangays in Panay, the first ever received by the residents four days after the typhoon. He then led the joint relief operations in Roxas and went to Ormoc to set up a one-man command center, looking for donors, recruiting volunteers, and using his own cash to sustain operations.

Angolo had to deal with different volunteers, some of whom stole relief goods brought by truck to the barangays, which he eventually had to report to the authorities. In Ipil, Ormoc, two men poked knives at a volunteer and somebody fired a homemade shotgun. Two volunteers were punched on the face and stones were hurled at them, as beneficiaries fought to receive more goods than could be allocated per family. He stayed until December 16, serving more than 70,000 families in Ormoc and neighboring towns, as operations coordinator, host, game master, porter, hauler, cook, waiter, and peer counselor to stressed victims and volunteers. 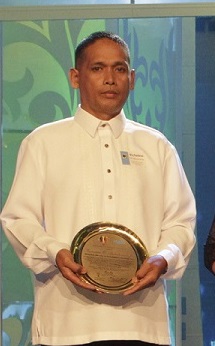 Security officers Victorino Gubalane Jr of Silver Link SecuritySecurity Officers Victorino Gubalane, Jr. of Silver Link Security and Investigative Services, Inc. and Julius Ravelo of Powerlink Security and Investigative Services sacrificed their personal desire to look after their respective families, in order to lead the security personnel under their command and provide immediate assistance to those within the premises of the Leyte Geothermal Business Unit (LGBU) of Energy Development Corporation (EDC).

Gubalane, who was on duty since the night before Yolanda struck, convinced his fellow guards to stay for clearing and rescue operations. Using an ax and a few bolos, his team was able to retrieve one dead body and cleared about 15 kilometers of primary road nets within the LGBU complex. Despite receiving information that his house was flattened and no word about his family, he voluntarily went on extended duty for four nights and three days.

Security Officer Julius Ravelo of Powerlink SecurityRavelo, who was one of the shifts-in-charge that morning when Yolanda hit land, motivated his men to stand their ground and help one another. Since all roads were not passable by vehicle, he walked for five kilometers to verify the status of some security personnel and their families residing in Barangay Nueva Vista, Ormoc City. Returning to the EDC Administration Office, he walked 14 kilometers on rugged terrain to reach Mahanagdong Power Plant A and B carrying 25 kilos of rice, 30 pieces of noodles, 30 pieces of sardines and five dozen coffee mixes for 15 guards rendering continuous duty of up to 96 hours. It was only three days later when he would walk 50 kilometers from Ormoc City to Baybay, Leyte and see his house practically swept away by the typhoon while his family sought shelter from his in-laws. 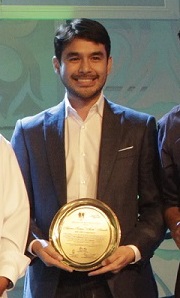 Atom Araullo ABS-CBN News and Current Affairs news reporterRounding out the list of six individual Yolanda heroes are ABS-CBN’s Atom Auraullo and Ted Failon. Araullo, reporter of Integrated News and Current Affairs, filed a report from the vantage of his hotel in Tacloban City on Umagang Kay Ganda. It showed the flood rising quickly and sweeping away everything in its path. The report reached over 1.99 million views on YouTube and was carried by news broadcasts around the world. Araullo also rescued people from the rampaging flood.

News anchor Failon was covering the coastal villages and the Tacloban City airport. He was reporting live on DZMM on Kabayan when the line was cut as Yolanda struck. Ted and his team were submerged in water, their faces nearly touching the ceiling of the house they stayed in.  They stood on the kitchen sink and a companion grabbed on to a refrigerator which would serve as a flotation device. One of his teammates did not even know how to swim but Failon promised, “Pare, hindi kita iiwan.”

Ted Failon ABS-CBN news anchorWhile Failon barely made it out of the incident alive, he and his crew helped save two residents and two children from drowning by holding on to them and looking after them until the storm surge subsided. The very next day, Failon joined the telethon in Cebu to begin the long road to rehabilitation for the victims of Yolanda. He was able to raise funds from avid listeners and viewers of his programs to build the very first classroom in Tacloban a month after the typhoon.

Their genuine concern for the Yolanda victims, and their loyalty to their work, earned them plaudits from their fellow kapamilya in the Lopez Group. 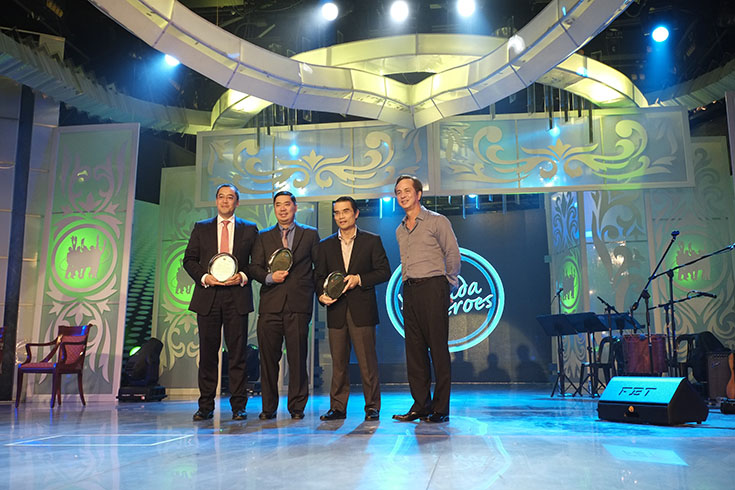 Yolanda Heroes - Special Citation for leadershipMeanwhile, the LAA gave received Special Citations for Leadership to First Philippine Holdings Corporation chairman and chief executive officer Federico R. Lopez, EDC president Richard B. Tantoco and First Gen Corporation vice president Victor Emmanuel B. Santos. They were recognized for providing strategies or planned courses of action to overcome extreme difficulties posed by Yolanda, and for mobilizing, guiding and inspiring teams of employees into compassionate action. LGBU facilities were devastated and scores of employees lost their homes and family members to the disaster. 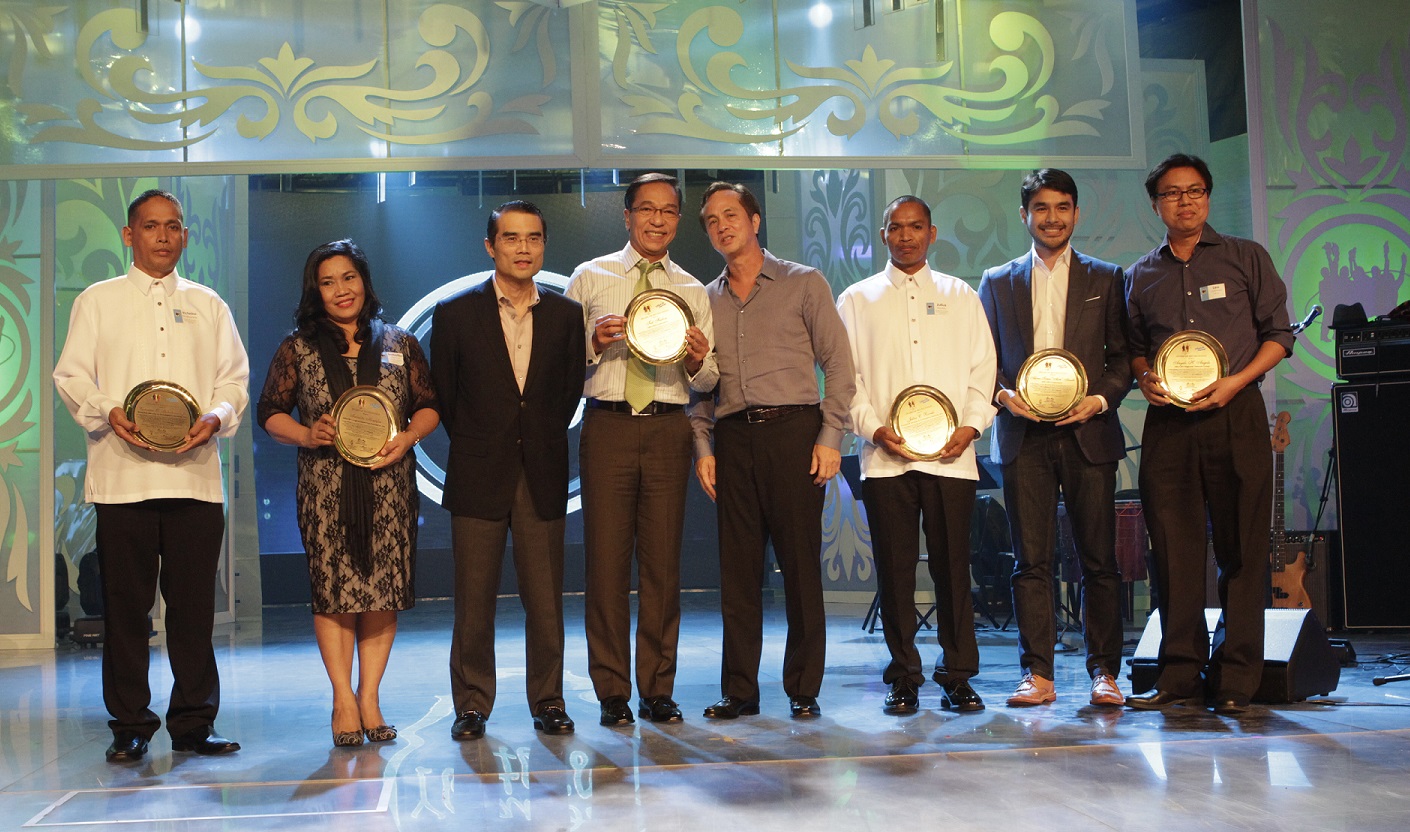