Heritage and Love of Country

One of the Lopez Values we hold dear has to do with nationalism or love of country. We have shown our practical adherence to the value in the way we always strive to serve the Filipino everyday in our corporate operations. 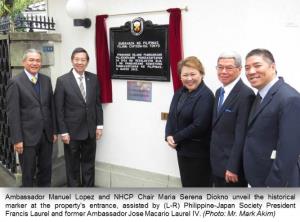 We also show love of country through symbolic ways… like how we respect our flag… how we honor our heroes who have sacrificed their lives so that we may all live in freedom. Love of country also means loving ournational heritage… the things from the past that mingle with the present to make us what we are as the Filipino people today.

In my three years now as our country’s Ambassador to Japan, I have been given the rare honor of seeing and participating in a variety of activities that honor our heritage and show our love of country. There were things past administrations did that we have been able to rectify, to put things right, to honor our past.

Before I assumed my post, there was an online petition to protect the Philippine patrimonial properties in Japan because of unfortunate decisions made during the time of President Gloria Macapagal-Arroyo. On the face of it, the Philippine properties were bidded out purportedly for improvements. But the process was done in secret in Japan, with reports of brokers making illicit commissions. Filipinos in Japan campaigned against the sale as they insisted “the historical value of the properties be preserved for the generations to come.”

I knew what I had to do and led the efforts to preserve our national patrimony. In June of 2013, we realized an almost impossible feat by recovering a plum of a property in Nanpeidai, Shibuya district, the former Philippine embassy chancery that was “sold” by the past administration. Concerned Filipinos called the disposition of the property by the Arroyo administration a sale of Philippine patrimony paid for by the blood of Filipinos who died during WW2.

It took several years of litigation before we recovered the Nampedai property in Shibuya. It helped a lot that Solicitor General Francis Jardeleza came on board and helped the cause with our local court whose decision became the basis of the decision of the Japanese court. Last June 1, 2013, the Philippine flag was raised again after 7 years and many of the staff who had worked there before shed tears while singingour national anthem.

Last March 3, we celebrated another victory. A historical marker was unveiled at the Official Residence of the Philippine Ambassador to Japan in Tokyo’s central Chiyoda ward, making it the latest addition to the national registry of Philippine historic sites and structures today. Not too long ago, the past administration tried to sell the property and even practically abandoned the residence in a sorry state until I arrived and worked on its rehabilitation.

Located within a 4,500-square meter property of the Tokugawa Shogunate, the Iberian-style residence was first built in 1934 by the family of the prominent businessman Baron Zenjiro Yasuda, whose descendants include the international artist Ms. Yoko Ono. 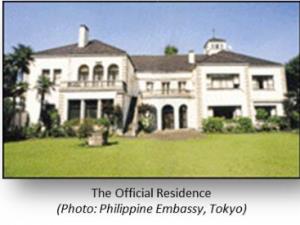 On March 31, 1944, then President Jose P. Laurel purchased the property for the Philippine Government. In succeeding years, the Kudan – as the residence is also referred to on account of its location near the Kudanzaka hilltop — became both the official home in Tokyo of Philippine Ambassadors to Japan, and a central venue for the conduct of Philippine diplomacy and cultural promotion.

The Kudan is now the first and so far only officially-designated Philippine national historical landmark outside of the country. The National Historical Commission of the Philippines in the resolution declaring the Kudan a National Historic Landmark also urged “the national governmentto retain, protect and preserve the site as part of the national patrimony.”

As I said in my speech during the unveiling ceremonies, the Kudan is the crown jewel of the Philippine Foreign Service, and we should preserve this important part of our diplomatic legacy and national patrimony.

Indeed, this is a happy culmination of a long fight undertaken by concerned Filipino citizens who opposed previous attempts to dispose and privatize the property. There are simply some things that are beyond a commercial price tag. I am proud of my role in helping recover these properties.

In the course of our careers, we will be tested to show our love of country. Doing what is right, what honors our heroes and accomplishments as a nation is expected of us whatever the circumstances might be. Love of country is always… priceless!