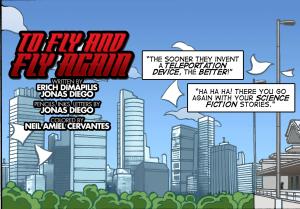 With the warm reception of our first web comic, “The Man in the Frame,” we are now proud to bring you the second installment of our project: the web comic series entitled, “To Fly and Fly Again.”

In this part of the story, we focused on how the hero of the web comic series – my father – showed his foresight, his pioneering entrepreneurial spirit and his strong drive to see the development of his country. Did you know that he founded the first Filipino airline? No, not Philippine Airlines but Iloilo Negros Air Express Company or INAEC, preceding Philippine Airlines (PAL) by eight years. He saw aviation as an important ingredient to developing and uniting our country … an archipelago.

We will also see how the war years blew up his dreams in smoke as the invading Japanese bombed all his planes, but only after his Sykorski seaplane was able to rescue Geny and I in Batangas after we came down from Baguio where we were studying, to Manila and finally to Batangas in the space of 3 days to meet the plane.

In the meantime, Geny and I saw our first series of Japanese bombing in Baguio on the morning of December 8, and then in Manila, and finally in Iloilo the day after we arrived in our house in La Paz, Iloilo. This was the same day all the INAEC planes were destroyed by Japanese planes.

He will show his resilience and determination to follow his dream as he weathered the massive blows of war and resurrected his airline, now named Far East Aviation Transport Inc. or FEATI. It had domestic and international routes including a transpacific flight to San Francisco.

My father gave the nation the power to fly and he fulfilled his promise to do everything to see the Philippine rise again. Eugenio Lopez, the visionary that he is, lived by the values that are now enshrined in the Lopez Group values today.

The next comic series, “To Fly and Fly Again” is an adventure that inspires.