Many of you don’t know that my father, Eñing Lopez, built the Lopez Group based on values he imbibed as a student in Ateneo for ten years. His liberalism and concern for the welfare of our people was acquired during his college years at the University of the Philippines. And while his business acumen was something he learned from Lopez family members in Iloilo and Negros, his global perspective was something he developed in Harvard.

Having said that, I was told that my father’s story can be likened to Bruce Wayne a.k.a. Batman. Batman’s parents were also assassinated and that led him to start a crusade as a crime fighter. Truth be told, Batman’s heroics can be compared to that of my late father, except that my father didn’t run around the city clad in a tight suit and cape.

In the next few days, the Corp Comm Group will be giving you something that lets you in on our family’s story—perhaps even a peek at how we started and eventually had our legacy built. In a way, this is also in line with our objective of sharing the inspirations behind the seven Lopez values while also encouraging you to use it to help accomplish your own life goals. During my task as my family’s historian, I was convinced that we need to take a closer look at how our past shaped us into the institution we now are.

This is why I am proud to announce the launch of Eugenio at Heart, a four-part web comic that highlights the milestones in the life of one of the Lopez Group pillars, my father Don Eñing. Thiscomic will bring to light the crucial points where he demonstrated the virtues that defined his character and paved the way for what is to become the Lopez Group that we’ve all come to know today.

The comic starts out with Eugenio Lopez’s budding career as a crusading publisher of El Tiempo in Iloilo. It is in this role that he showed he had what it took to live up to his father’s name. 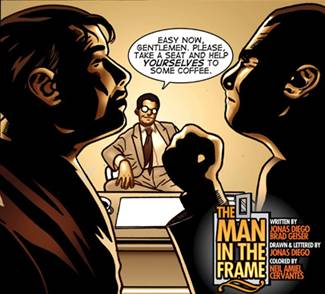 These comics will be sent one page at a time, and will also be accessible via the website lopezlink.ph/lopez-values/lopez-web-comics. I trust it will be easier for each of you to tell all your colleagues and family about it and get them hooked as well. I would also like to tell you that the stories we picked are the ones that we really found the most interesting; I personally had a good time going over each part. We also have other exciting projects to reveal in the following months and I really hope you will all find them exciting and worthwhile. Let me end this letter by wishing you the best in life. Just as how people in the past used the stars to guide them on their way, may the shining lessons from these stories help you navigate your way towards your future success.