In Pursuit of Education and Social Justice

Heroism is still very much alive in the Filipino spirit — a fact that the Gawad Geny Lopez Jr. Bayaning Filipino Awards given by ABS-CBN and Ugat Foundation, proves every year.

This award began when the late Eugenio “Geny” Lopez Jr. learned about a Filipino domestic helper, who died while saving a child from being run over by a car in Hong Kong way back in 1994. Today, the award has evolved and recognizes role models who manage to rise in the face of difficulties, to provide public service for the betterment of the nation. 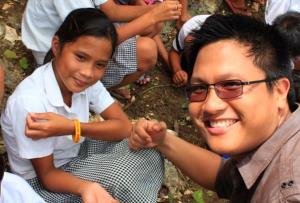 Jay Jaboneta was recognized by the Gawad Geny Lopez Jr. Bayaning Filipino Awards for his initiative, “The Yellow Boat of Hope Foundation”. (PHOTO CREDIT: Jay Jaboneta’s flickr.com page)
One of this year’s awardee is Jay Jaboneta who was recognized for his desire to help children in Zamboanga cross through mangrove waters everyday just to get to school and back home. Jaboneta was driven to post this status on Facebook, thereby gaining support from a number of friends who wanted to help. An initial contribution of a single yellow boat that could carry 35 kids safely across the waters led to the formation of The Yellow Boat of Hope Foundation—now a thriving national movement dedicated to helping communities become empowered agents of economic and social change.

To date, the foundation has put up dorms and daycare centers in Cagayan de Oro and Pampanga, and the boats Jaboneta helped provide are also widely used as a means of livelihood and transportation.

It should be noted that 2009 CNN “Hero of the Year” ‘kariton” classroom awardee Efren Peñaflorida was a Bayaning Kabataan Award by the Gawad Geny Lopez Jr. Bayaning Pilipino in 2004. His dedication to bringing education to the less fortunate street children in the Philippines became the drive for his initiative, which he called the Dynamic Teen Company (DTC). DTC gave children free access to an independent schooling experience, thereby, diverting their attention from joining notorious gangs, groups and fraternities, and instilling in them a sense of hope and aspiration by learning the value of life and education.

Peñaflorida was aware of the power of perseverance in overcoming life’s struggles, as he himself lived among the underprivileged. Despite the less fortunate conditions and the rampant gang activities that terrorized his community, he did not let things discourage him, and instead, used it as inspiration to rise above the challenges and thrive for success.

Another awardee worth mentioning is Rebecca Ouano from Cebu spent almost a lifetime promoting and implementing an alternative learning system program for the benefit of out-of-school youths, vendors and street children. 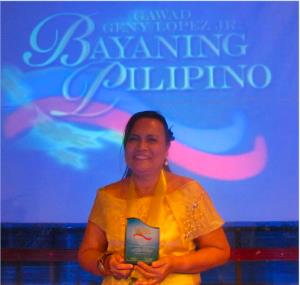 These heartwarming examples make me proud of how these people live by the Lopez Value of social justice—a significant concept that recognizes the importance of empowering people to build a nation.

In closing, I found that the real essence of volunteerism is in realizing that hope is more than just a dream, it is in how you react to the calling, how you take into consideration the fact that even the most humble efforts are bound to make a difference when grounded on inspiring one another.