Winners of the Nationalism Essay Contest

I’d like to share the good news with you that we have four winning essayists in the 3rd Lopez Values Stars Contest. The eight judges admitted that it wasn’t easy and most were teary-eyed after reading all 49 entries. The judges rated according to substance and originality (40%), writing style (15%), prognosis (10%) and clearly identifies Nationalism (35%). As such, the selection was narrowed down to 23 then eleven and finally, four.

The winners were honored by our chief mentor and chairman emeritus Oscar M. Lopez (OML) last Wednesday, June 20 in a lunch together with their supervisor and HR head. 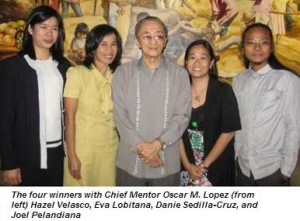 As you may recall, OML started the Lopez Credo and Values program two years ago because he wanted to make known the values and wisdom that was passed on by his father, the founder of the Lopez Group, Eugenio H. Lopez, Sr. The Lopez Group has now grown to around 14,000 individuals and we have to lean on technology such as social media to allow each of us to interact not only with OML and other senior executives but also with each other in the Group.

The four winners who best responded to OML’s question, “How can we express our nationalism today in our everyday work?” are (click name to read their entries): 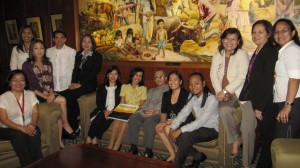 I’d like to impart to you OML’s thoughts on Nationalism as a Value which he expressed during the awarding ceremony yesterday: When we were discussing the Lopez Values in senior management, someone raised the relevance of nationalism and the difficulty of applying it in a world where commerce and industry are ruled by the spirit and rules of globalization. We tossed the issue back and forth and came to the conclusion that more than ever, nationalism as a corporate value is as valid today for the Lopez Group as it had been during my father’s time.

For starters, we need a strong sense of national pride as a people for us to get anywhere in a highly competitive world. The great nations of the world today from America to China have very strong feelings of nationalism. Globalization may have broken down barriers to international trade but the world today is as much a collection of nations as it had ever been.

Presenting the best of our country to the world is one of the more important values that should drive a conglomerate like ours. I am proud to report that in this regard, we have not fallen short.

Early this year, a group of geologists from Energy Development Corporation (EDC) left for Chile to start exploration work in a geothermal concession area awarded by the Chilean government to this Lopez Group company. For many of these geologists, this was their first time to travel abroad. But this was not the only reason they were excited.

They were also proud to represent the best of our country in a foreign land. Indeed, just the other week, they sent back a photo of their site office where they installed a Philippine flag borrowed from the Philippine Embassy in Santiago, the Chilean capital. Here is a group of Filipinos as far away from their homeland as they could be in the Chilean mountains high enough for the air to be thin, and they are proudly telling the world they are Filipinos and they are ready to share what they know in the field of geothermal energy.

What these EDC geologists are doing in Chile is a good example of the Lopez value of Nationalism, which you might already be familiar with as an employee of a Lopez Group company. It is a value that my father, Eugenio Lopez, Sr., practiced with a passion in all of his businesses. We maintain this value today because it remains relevant and important for our country. It defines us as a Filipino business group wherever our business may take us in the world.

Nationalism is one of the most cherished values of the Lopez Group. Today, the expression of this value may seem different from the way my father Don Eugenio Lopez expressed his nationalism. But it really is because at the root of my father’s nationalism is a strong belief in the capability of the Filipino… that we can be competitive with the best in the world. That hasn’t changed much through the times.

I have read your entries in the essay contest on nationalism and I am glad that you get the idea behind that cherished value. As we award the winners today, we move ahead with nurturing this corporate value with the future leaders of the Lopez Group.

My congratulations to the winners! And let us all be the patriots our country expect us to be.