Nationalism in the Workplace

When I was a kid, I’ve seen how my father worked hard for our country… not by going out on the streets, nor going up the mountains. He did it behind a desk while running a power plant in Calaca, Batangas. He spent his week days away from his family so he can efficiently build and manage that plant. He made sure that they delivered on their commitments, not just to their company but to their host community as well. And he kept his word that he’ll only bring home clean money to his family.

The place where I had my first lesson about love of country was in a dining table. I was listening to my father’s “speech.” He was telling us how he values his job because it would contribute something for the country… how the electricity they’ll produce would help the economy… how it’s important not to take commissions from contractors because it would save the government tremendous amount of money… how everything they’ll do would reflect on Filipinos doing clean and honest work for fellow Filipinos. 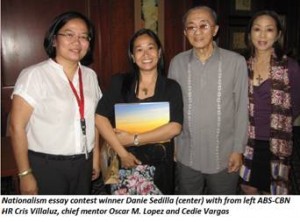 When my father said, “if we love our country enough, we have to work harder so that our country can be great again.” – I believed him. I was indoctrinated. I wanted to be like him. I wanted to work for something greater than myself. When I came in at ABS-CBN, I was a copywriter for CCM (Creative Communications Management). As a member of the Corporate Image and Special Events group, I produced plugs to ask for donations when there were calamities… to celebrate and commemorate Filipino holidays and occasions… to communicate why ABS-CBN is in the service of the Filipino. For almost 13 years, I’ve been crafting messages to help Filipinos in their time of need… to cheer them on… to inspire them.

I honestly feel that I wouldn’t be walking the hallways of ABS-CBN every single day with a sense of mission and gratefulness, doing the things I’ve been doing for the past years if my job isn’t fulfilling a deeper need. I was asked once, “what is it about your job that you value the most?” And up to now my answer hasn’t changed. It is the fact that I have the opportunity to speak to millions of Filipinos, to sway their opinions about themselves, to make them believe that we have what it takes to be better.

My story is no different from that of my father. We came to work, but we put our heart into it. I guess, it’s the heart that would always make the difference. If we do our work well, if we love it enough, if we perform it with dignity and integrity, then there would be less people this country needs to worry about.

Nationalism seemed like such a vague concept. It sounds like something so beyond us, something bigger than what a single individual can do and achieve. As a matter of fact, it tends to be scary sometimes because we equate it with hardships, trials and dying for a cause. But if we just think about it, nationalism’s bottom line, in the workplace or anywhere for that matter, boils down to what every individual is capable of doing – love. To be nationalistic, we don’t always need to die. Sometimes, we need to live and work hard and love what we do. It’s when we love our jobs that we’re ready to make sacrifices… we’re willing to take the flak… we’re prepared to go into battle or take chances… and most importantly, we find it easy to give our best. 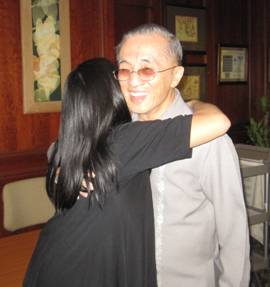 Danie hugs OML
Yes, I am an employee. But I am also a citizen at the same time. I believe that whatever I do as an employee, is reflective of who I am as a citizen of this country. Yes, what I do might just be a drop in the bucket, but even a drop can tip the scale. I read somewhere, “all that is necessary for evil to triumph is for good men to do nothing.” My nationalism compass tells me to refuse to thread on the path of doing nothing, of stagnation, of complacency. If I want this country to be back on its feet, I cannot just sit around. I cannot demand something from my country and not move a finger. If I want it better, I need to break a sweat. I need to work harder.

I love my country. And I know that there are a lot of Filipinos out there who share the same feelings as I do. And like them, I can help this country in one of the best ways I know how. And that is to love my job, do it well, with a great deal of honesty and integrity. I can once again hear my father, “if everyone is else is doing something wrong and you’re in a tremendous pressure to do the same, hold your ground, do the right thing anyway. A wrong thing is a wrong thing even if everyone else is doing it.” I know that the time will come when I would say goodbye to the corporate world and when I do, I would like to look back at my work journey with fondness, where there wouldn’t be what ifs, where there wouldn’t be regrets… just a good pat in the back, good stories to tell my children, and a heart full of hope that I have passed on something valuable.

At the Creative Communications Management division, Danie Sedilla-Cruz is in charge of promoting the image of ABS-CBN and some of its advocacies. She coined the names “Bayanijuan” and “Kapit-Bisig Para sa Ilog Pasig.” Recently, she wrote the song for Bida Best Kids and co-wrote the song Da Best ng Pilipino Saan Man sa Mundo. She is also part of the team that creates ABS-CBN’s summer and Christmas station IDs. Her works have won trophies from the Catholic Mass Media Awards, KBP Golden Dove Awards and Araw Values Awards. Danie was CCM’s first Walk on Water Awardee. She feels blessed that her job is about paying tribute to the Filipino spirit because that is her true passion. Her inspiration is her father, an honest man in government service. – Robert Labayen, Immediate Supervisor (by Danie Sedilla-Cruz)