How can we express our nationalism today in our everyday work?

Early this year, a group of geologists from Energy Development Corporation (EDC) left for Chile to start exploration work in a geothermal concession area awarded by the Chilean government to this Lopez Group company. For many of these geologists, this was their first time to travel abroad. But this was not the only reason they were excited. They were also proud to represent the best of our country in a foreign land.

Indeed, just the other week, they sent back a photo of their site office where they installed a Philippine flag borrowed from the Philippine Embassy in Santiago, the Chilean capital. Here is a group of Filipinos as far away from their homeland as they could be in the Chilean mountains high enough for the air to be thin, and they are proudly telling the world they are Filipinos and they are ready to share what they know in the field of geothermal energy.

What these EDC geologists are doing in Chile is a good example of the Lopez value ofNationalism, which you might already be familiar with as an employee of a Lopez Group company. It is a value that my father, Eugenio Lopez, Sr., practiced with a passion in all of his businesses. There are those who say that at this time when globalization has become the prevailing norm in the world of business, nationalism is out of place… has outlived its usefulness. We had this discussion as well in senior management when we reviewed the Lopez Group Values a year ago. But we decided to keep it because it remains relevant and important for our country. It defines us as a Filipino business group wherever our business may take us in the world.

Nationalism is one of the most cherished values of the Lopez Group. Today, the expression of this value may seem different from the way my father Don Eugenio Lopez expressed his nationalism. But it really is because at the root of my father’s nationalism is a strong belief in the capability of the Filipino… that we can be competitive with the best in the world. That hasn’t changed much through the times. 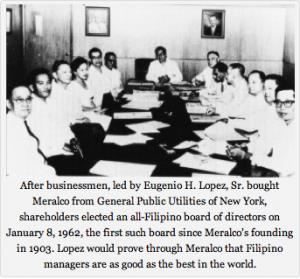 In his time, my father practiced what he preached about nationalism. Against the common belief at that time, he insisted that Filipinos are as capable as Americans in running a complex, technology-intensive operation. And he placed his money where his mouth was by buying control of Meralco. He showed that he could get sufficient financing from international banks to take control of Meralco from its American owners. He also showed that our engineers and managers are as good as, if not better than the Americans they replaced.

When it was our turn to run the Lopez Group, my brothers Geny, Manolo and I expressed our adherence to the Lopez value of nationalism by investing in businesses whose operations improved the Filipino’s quality of life. We were also not afraid to fight for what we thought was in the national interest even if it meant standing up to political powers and sacrificing our own business interests. We also made sure our businesses practiced Corporate Social Responsibility even before CSR became popular in the business community.

Today, in the midst of this dramatic impeachment hearing, we hear many voices claiming to have the national interest behind them. In the business sector, there is this emotional debate on the future of our natural resources. For the common Filipino, it is sometimes difficult to know who among the contending voices truly express a form of unadulterated nationalism that translates to pure love of country.

Inasmuch as nationalism is an important Lopez Value, what I want to hear from you as a Lopez employee is how more can we, who work in the Lopez Group, express our nationalism today in our everyday work? Write an essay of about a thousand words or less on this topic and send on or before May 11. I will sit down with those who have written the best essays and the discussion will generate ideas we can share with everyone. And yes, the best essay wins an iPad.