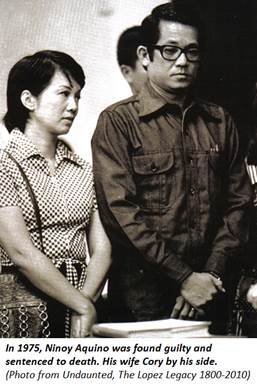 In 1975, Ninoy Aquino was found guilty and sentenced to death. His wife Cory by his side.As August 21 draws near once again, and as we commemorate the 31st death anniversary of Ninoy Aquino, I cannot help but reflect on his life and how he impacted my own family.

Ninoy was always the “wunderkind” politician whose quick wit, rapid-fire delivery, and charismatic personality had many convinced that he would one day be president of the Philippines. But it was also these traits that earned him the notice, and the ire, of Marcos.

When my brother Geny was imprisoned with Serge Osmena in the early days of Martial Law, they were all held in Fort Bonifacio on falsified charges. Geny and Ninoy were separated by a wall and communicated by passing messages through a small crack in that wall. It deepened their relationship as each gave hope to the other during those dark times.

Geny and Serge went on a hunger strike to protest their detention by the dictatorship, which eventually inspired Ninoy to go on a hunger strike of his own. My sister Presy and her husband Steve Psinakis became confidantes of Ninoy when he went into exile in the US.

Perhaps the true identity of Ninoy’s killers and who plotted his assassination may be lost to the wind, but his ultimate sacrifice helped light the torch that would lead to our liberation three years after. It took this one, unarmed man, who only wanted to return to a land that was subjugated by a dictator, to finally show a nation that “the Filipino is worth dying for.”

Like most, we at the Lopez Group realize that the freedom we often take for granted today probably would not have come to pass if Ninoy had chosen to just enjoy a cushy life in Boston instead of going home to the Philippines. After Geny and Serge escaped from imprisonment and also went to the US, Geny knew that he needed to follow Ninoy’s path home if his family and his country would ever regain the freedom it had lost.

Ninoy’s love for country, his sense of duty, and his desire for a free nation compelled him to return in spite of the clear threat to his life. Three decades later, and our family as well as the employees under our purview can never truly express how grateful we are for his sacrifice.