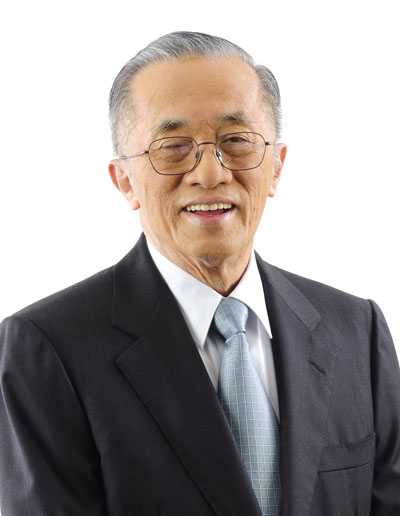 Oscar M. LopezGood Afternoon to all of you and welcome once again to this year’s much-awaited Lopez Achievement Awards ceremonies.  I believe this is the thirteenth time we are holding these ceremonies, and for many of you here, 13 will be a lucky number.  I myself am very happy to be able to share this occasion with you.  Last year, I had to miss the ceremonies because I was out of the country on business.  This year, I made sure that nothing would interfere with my being here.

For those of you who are awardees for the first time, or are present for the awarding ceremonies for the first time, let me briefly explain why we are here.  Every year, we come together to honor those who have demonstrated excellence in the performance of their roles and duties as members of our corporate family, as well as to remember those who, over the more than eighty-year history of the Lopez businesses, have come to represent the spirit and meaning of excellence.  As I have mentioned several times in the past, I would also like to think that this afternoon’s occasion is less about handing out awards than it is about celebrating, together, the many things that we have done well in the course of the past operating year.  Unfortunately, we don’t have a venue large enough to accommodate all our fellow employees who would have wanted to be here this afternoon.  Every year, that number keeps growing.  So, for those of you who are fortunate enough to be here, do count your blessings and share your experience with your co-employees.  I hope that, in the not too distant future, we will have a venue, but always one that is our own, that will be large enough to fit many more of us.

Business Excellence is one of our seven core values, but it does not easily lend itself to definition.  Nor does it arouse the emotions and stir the heart the way some of our other core values do, like nationalism, integrity and social justice.  Often, “business excellence” evokes much more dispassionate connotations, like financial results, the balanced scorecard, competitiveness, continuous improvement, and quality.  And yet, business excellence is the bedrock upon which our business success and corporate longevity are built.
It is, in many ways, a collective expression, to represent the many mindsets, passions, processes and commitments that we take to ensure the proper execution of our strategies in order to stay competitive, relevant and successful.

But if business excellence, as a term, does not immediately arouse the emotions, then you should listen to some of the stories that the nominations to the Lopez Achievement Awards tell.  Stories about how some of our colleagues go way out of their zones of comfort and safety in order to provide our customers the service that they expect, and often much more than they expect, under the most extreme adverse conditions.  Stories about how other colleagues of ours refuse to accept the handicaps imposed by equipment losses and breakdowns, again caused by extreme adverse conditions totally outside of their control, and instead find ways and fixes in order to restore service way in advance of what might reasonably be expected.  And yet other colleagues who, never satisfied with leaving things well enough alone, constantly take our best products and make them better.  None of these are things that a person would do for the money; indeed, there is often no added compensation or reward involved in these deeds.  If at all, there is only added risk to safety.  In the telling of these stories, we often find that the reasons our colleagues do the extraordinary things they do, are their love of what they do, their love for their companies, their genuine loyalty and affection for their customers, and the pride that they take in being better than anyone else at what they do.  In their stories, business excellence ceases to be dispassionate.  Instead, it becomes exciting, passionate and inspiring.  Take a quiet, stolen look at the colleagues to your right and left…it is probably their stories that are being told in the nominations.

During this year’s LAA cycle, we received an unprecedented number of nominations, a total of 50!  The most we had ever received in the past was 40.  And it was not a matter of quantity over quality either.  This year, we had probably the most senior, in terms of rank and experience, group of screeners that we have ever had, and even they had difficulty trimming the number of nominations to a manageable number of semi-finalists.  Hence, we had more semi-finalists that we have ever had before by a big margin, a total of 22.  I am told that during the initial screening deliberations, there were initially as many as 30 nominations that were considered as semi-finalist material.

There is one other feature unique to the 2013-2014 LAA cycle.  We decided to create a separate, special award to recognize the many heroic and extraordinary actions and initiatives that followed in the aftermath of Yolanda.  We felt that the many heroic actions and initiatives in response to the devastation caused by Yolanda to our businesses and host communities would have overwhelmed the Lopez Achievement Awards.  At the same time, it is but proper that we recognize and honor the uniquely meritorious response of our companies and colleagues to that unprecedented natural calamity.  Hence, the Yolanda citations for leadership and heroism.

One of the principal reasons the Lopez Family came into prominence in Iloilo was because of the unique response by one of our ancestors, the first Eugenio, to a severe famine that beset Iloilo in 1878, due the failure of the rice crop from drought and locust infestation.  Eugenio took it upon himself to lead a relief operation during which he and a brother dipped into the family coffers, and even reportedly sold one of their haciendas, in order to distribute rice and money to the countless famine victims who came to them for assistance.

Mobilizing resources to assist victims in times of crisis is a tradition that seems to have become ingrained in our family DNA and in the DNA of the Lopez companies.  I remember, almost as if it were only yesterday, how my father himself would lead Meralco’s response to some of the devastating typhoons that hit the country during the 1960’s and early 1970’s, like Dading, Trining and Yoling.  He would be out patrolling the franchise area from dawn to dusk, seeing to it that downed electric lines were being restored, but more important, seeing to it that the Meralco linemen and leadmen doing the work were well supported.  It was important that they saw and could take heart from the fact that their leader was right beside them in the thick of action.  These same scenes were re-enacted at Meralco during the late 1980’s and throughout the tenure of my brother Manolo as its President, and then again, across all our businesses every time a crisis or natural disaster has occurred.

Yolanda was no exception.  In the immediate aftermath of Yolanda which directly hit many of our geothermal installations in Leyte, Piki and his crisis team took immediate and decisive action to ensure the safety of our people, their re-supply, and the commencement of repairs to our facilities.  But beyond that, they were forced to assume de-facto leadership of the re-supply and rehabilitation of our host communities in Leyte, in conjunction with the local government units.  Under Gabby and Carlo’s leadership, ABS-CBN and Sky were among the first to reach the areas devastated by Yolanda and to begin reporting to the rest of the Philippines and to the rest of the world on what had taken place in those areas.   In the same way that it had come to be the focal point of relief and re-supply during Ondoy, Sendong and Pablo during the past several years, Sagip Kapamilya again took the lead in mobilizing the re-supply of Leyte.

I don’t need to dramatize what happened less than a year ago when Yolanda came and went.  The citations tell a better, more complete, story.  It is, I think, enough, and it tremendously warms my heart, that we can, today, share our recollections of what took place and feel grateful for one another.  It was, for those whom we honor this afternoon with citations, a shining moment.  It is, for the Lopez Group, another of many shining moments that go back some 150 years.  And I know that there will be future shining moments, for our country lies in harm’s way, and whenever crisis threatens, we are called upon to provide leadership and relief.  It is in our DNA.

So again, congratulations to all of you – the winners, the nominees, and the many who should also have been nominated, who might also have won, but who, for one reason or other, have passed unrecognized.  To me, you are all heroes and I am proud to walk among you. Keep up the good work.  I said it last year and I’ll say it again:  there is still so much for us to do, and so little time, to build a better future for all Filipinos.  Thank you.