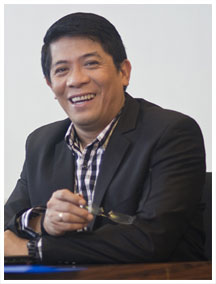 In 2002, then president and chief operating officer (COO) Federico M. Garcia and then Integrated Sales and Marketing head Nicanor Gabunada Jr. talked to him about joining the company but he was not ready to make the big leap. The following year, Labayen happened to work with ABS-CBN chairman and chief executive officer Eugenio Lopez III (EL3) when the latter chaired the 2003 Ad Congress, and Labayen wrote the theme song and did other creative work for the annual meet. In 2004, EL3 invited him to join ABS-CBN and, somehow, the timing felt right.

“I was at the height of my career in advertising. I had no reason to leave the industry. I was managing partner of (one of the top advertising agencies) and concurrent executive creative director. I had a very good 20-year advertising career running. But you know, in your 40s you experience some kind of midlife crisis, you want to do something more meaningful. I wanted to do something more, something for the country, something patriotic. ABS-CBN gave me that opportunity. I would be pitching not products, but Filipino values, Pinoy pride,” he explained.

Labayen joined ABS-CBN in June 2004 as head of Creative Communication Management (CCM) and reported to then Entertainment Group head Charo Santos-Concio, now president and COO. He had a steep learning curve, having no knowledge about broadcast or media promotions.

“The people in CCM were the ones who taught me. I was honest with them: this is what I know, this is what I don’t know. Clients usually want someone very experienced, but here I was, walang alam. It was a struggle at first. But I learned from all of them. It took about a year of adjustment and then we hit our rhythm. I’m a good team player,” Labayen recalled.

He joined just when ABSCBN lost dominance among Mega Manila viewers and found humility to be particularly essential in building a good team.

“This is ABS-CBN. You work with a lot of accomplished people, many heads who have their own objectives. But losing the top rating in Mega Manila humbled everyone. We had to work together more closely, to shape up and pull together. I found myself working with a very good executive committee. I did not see much competition between heads, no turf wars, everyone was cooperating and offering help,” he said.

He has no regrets joining ABSCBN. “I really enjoy it here. I made the right decision. Work here gives vent to my artistic side, while at the same time I am able to do advocacy on Filipino values and lift national pride.”

Credited with ABS-CBN station IDs that resonate with Filipino audiences, Labayen says the CCM team doesn’t run out of ideas because their anchor is love of country and love for the Filipino.

There was a time in the advertising industry when creatives didn’t have much respect for jingle-based commercials because it was “too easy.” Instead, writers and art directors wanted something “clever” to trigger purchasing choices. But in ABS-CBN, Labayen found a ready audience for his heartwarming songs, with the station IDs CCM has made over the years viewed by millions on YouTube and on ABS-CBN channels that air globally.

For LopezLink readers, Labayen said, “Working in a Lopez company is a great honor. The Lopez Group has a tradition of nationalism and public service. In all the management meetings I have attended, I find that ‘in the service of the Filipino’ is a true and unique character of ABS-CBN and the Lopez Group, for that matter. If that is something you believe in your heart that you want to do (serve the Filipino), then you will be successful and happy in your work.”