1907
Eugenio is taken to Japan by his mother and aunt for medical treatment. The visit sparks the boy’s affinity for the island nation.

1908
Benito, then serving as governor of Iloilo, passes away several days after being shot by an assassin.

1912
Eugenio enrolls at Ateneo, then based in Intramuros, as an interno or boarder. Here he meets Arsenio Dizon, a future Supreme Court justice

1919
Graduates number 5 in his class. Along the way, he picks up prizes for his writing in English and Spanish

and taking the bar exams, he proceeds abroad for graduate studies at the Harvard Law School.

1924
Returns to Manila and joins the law firm of Vicente Francisco, where he befriends a fellow associate, Claro M. Recto.

In the latter part of the year, he meets Pacita Moreno, a high school senior at St. Scholastica’s College.

1928
In January, he weds Pacita at the St. Ignatius Church in Intramuros, with Dizon as best man.

The newlyweds then leave for Japan for their honeymoon.

1930
Doña Asion passes away, only two months before Nitang gives birth to Oscar.

During this period, the couple welcomes their first and only daughter, Presentacion.

1943
The third Lopez son, Manuel, is named for his godfather Manuel Roxas. 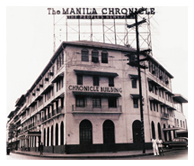 1947
Sells FEATI to Philippine Airlines for P3.5M and later acquires The Manila Chronicle for P255,000.

1951
Gains control of the Binalbagan-Isabela Sugar Company in Negros, the largest sugar central in Southeast Asia; this elevates him to the ranks of the country’s “super millers”.

1956-58
Gets into radio through his Chronicle Broadcasting Network’s DQXL, the country’s first FM station, and DZQL; into TV with Channel 9 and Channel 3, which he purchases from Alto Broadcasting System’s Tony Quirino and his partners; and into banking through PCIBank.

With his purchase of Pampanga Sugar Mills Inc. also in 1956, Eñing becomes “the biggest sugar baron of them all”.

In May, leaves for the family’s annual vacation and to receive a Distinguished Service Award from Harvard; they are scheduled to return to Manila on September 24 On September 22, Pres. Marcos places the country under martial law.

1974
Returns to the country for a month in June to try to secure the release of his son Geny, after which he proceeds to Iloilo and Guimaras for a last visit.

1975
Passes away in San Francisco on the morning of July 6.