For the Halalan 2004 multi-platform coverage, the Regional Network Group coordinates election coverage in 40 live points assisted by some 30,000 field volunteers all over the country.

2004 For the Halalan 2004 multi-platform coverage, the Regional Network Group coordinates election coverage in 40 live points assisted by some 30,000 field volunteers all over the country.

The Halalan 2007 website and the Boto Mo, iPatrol Mo campaign are launched in January.

A tweet from ABS-CBN News Channel—“Vice mayor’s wife, relatives, several journalists abducted in Shariff Aguak, Maguindanao…”— alerts the public to the Maguindanao massacre. A Bayan Patroller had sent a photo of the crime scene to ABS-CBN.

National Union of Journalists of the Philippines’ Rowena Paraan takes over as BMPM head.

BMPM: Tayo Na’s registered Bayan Patrollers are estimated at half a million, including those based abroad.

Halalan 2013 wins in the Customer Focus category of the Lopez Achievement Awards.

EDC issues its first Eurobond, raising $90 million for the development of the Mindanao 1 project

The 440-MW Leyte-Luzon plants in Leyte, the 40-MW Bacman II plant in Bicol and the 52-MW Mindanao 1 geothermal production field in North Cotabato are commissioned

EDC projects generate a total of 1,149.4 MW, accounting for 60% of the country’s total geothermal capacity

Receives the Excellence in Ecology and Economy Award from the PCCI

Launches its IPO in the Philippine Stock Exchange (PSE)

With the handover of the 130-MW Upper Mahiao Power Plant, the company becomes a power plant operator

The Renewable Energy Act is enacted on December 16. In line with EDC’s new vision, the law encourages the development and utilization of renewable energy resources as effective tools to prevent or reduce harmful emissions

For obtaining a gold rating or 95% and above for three consecutive years, EDC is named the platinum awardee in the Institute of Corporate Directors’ 2011 Corporate Governance scorecard

The 150-MW BWP is commissioned

The BWP wins several awards, including the Asia-Pacific Renewables Deal of the Year from Project Finance International, and the Best Export Credit Agency-Backed Green Deal and one of the Top Ten Global Deals of the Year from London-based Trade and Export Finance

Roberto M. Lopez (RML) establishes Phil-Asia Assistance Foundation Inc. (PAAFI), months after his return from exile in the US

RML passes away due to illness. He had just turned 42

Registers its most successful year thus far with 1,259 elementary, high school and college students currently in school for 2015-2016. The foundation also rolls out its portable library program in Caloocan and Quezon City

Marks its 30th anniversary in November 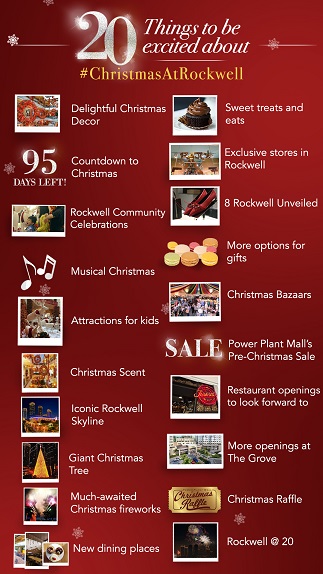 Christmas 2015 treatsWhat makes Christmas at Power Plant Mall and Rockwell Center ultra special this year? We count some of the reasons.