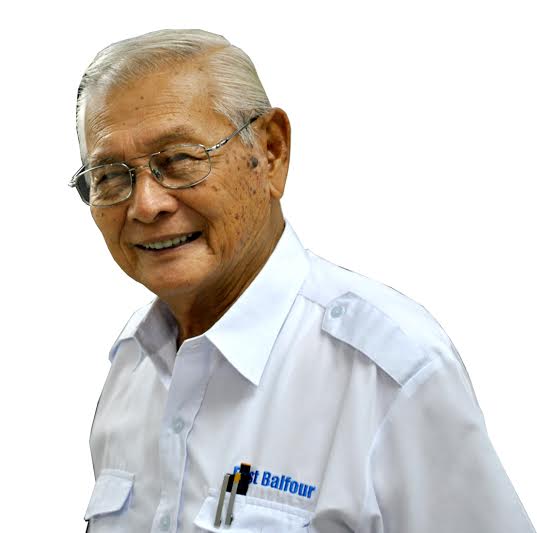 Luisito H. Sarrol is known as Tatay Toto among his colleaguesThe son of a Japanese merchant and a Filipina mother from Kabankalan, Negros Occidental, Yoshito Haraoka—also fondly known as Luisito H. Sarrol or Tatay Toto—has such a sensitive job description that to this day and at his age, his expertise is still sought after in the construction industry.

It was on August 21, 1995, Tatay Toto clearly remembers, that he reported for work at the office of ECCO-Asia (then a member of the Lopez Group of companies), not knowing that the man who recruited him, former AG& P president and later president of ECCO-Asia Ricardo Reyes, had just passed away. But there was no turning back for Tatay Toto.

Tatay Toto finds his years with the Lopez Group “a very enriching and rewarding experience.”

“I was already an experienced Fabrication and Erection technical man before I joined this Lopez-led company. I got this know-how from my previous employments. In fact, I was able to rise through the ranks to become a supervisor and eventually project manager even if I was not an engineer,” relates this widower of 18 years who has six professionally successful children and 11 grandchildren, some of whom are based in Japan.

But it was when he joined First Balfour that he was able to apply his previous knowledge and skills and learn new things, thereby enriching his experience.

“I was able to feel that the company valued me as human capital. It showed me my worth as a valuable professional in the company. My superiors were so accommodating to my suggestions and recommendations on matters of our projects and on the nature of my work. The management and the company implemented policies that are beneficial not only to its human resource or workers, but also to the community, economy and society. Managers and supervisors treated each other and the employees well, as if they were their family.”

This Tatay Toto saw when they experienced difficulty in a bridge project. Despite its relatively small contract value and budget with very limited time, the company president remained supportive.

“Materials that were needed so badly were sent immediately in order to meet the project timetable and the deadline of completion. During critical periods, even Mr. Oscar Lopez made it a point to visit us personally and talk with us during very light moments…just to know how we were coping and to know our needs. He was there not just to follow up on the status of the project but also to check on our welfare. He was indeed a hands-on employer and company owner, being the chairman of the board.”

Tatay Toto also saw that the company’s projects provided jobs to the residents of the community and helped improve the local economy without sacrificing the environment. Here he saw the Lopez Values at work, particularly unity, nationalism, and employee welfare and wellness, among others.

Although he is still active with First Balfour, Tatay Toto is currently preparing his papers as a Japanese national with plans of retiring in the near future. At age 88, he is still a valued consultant for technical erection in the Lopez Group’s construction company. Still, he wants to trace his roots in Japan, a plan which during World War II had to be shelved due to the animosity towards Japanese nationals, to the extent that his mother and uncle thought of changing his name to hide his real ancestry.

At one time, Tatay Toto points out, his Japanese father was the chief sugar boiler of Central Santos Lopez owned by Doña Rosario Lopez in Barotac Nuevo, Iloilo. “I want to see the place (in Japan) where my father was born and where he spent his childhood and part of his adulthood,” says the well-liked Tatay Toto. “I want to live also where he lived. I am already old and I want to spend my retirement with my children and grandchildren in the land of my father and my ancestors.”

For new and regular employees of First Balfour and the Lopez Group of companies, Tatay Toto’s advice is for them to work hard for they also benefit in terms of their jobs.

“Let us be honest with the company—not just with ourselves—in earning a living as honest work for honest pay goes a long way. Let us also pray for the continued growth of the company for as it grows, we also grow, financially and professionally. Dito sa First Balfour at sa mga kumpanya ng Lopez, kapag lumalago at sumusulong ito, kasama tayong nakikinabang sa paglago at pagsulong.” (By Dulce Festin-Baybay and Dolly Pasia)