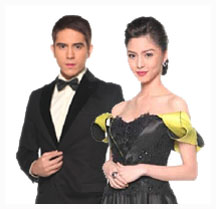 tfc kim-geraldAS The Filipino Channel (TFC) expands its coverage in Canada to include carriage on Rogers Cable, more and more viewers are now getting their daily dose of Kapamilya entertainment.

TFC’s signal was turned on last April 26 to Rogers Cable subscribers following the signing of a memorandum of agreement between ABS-CBN Canada ULC and Rogers Communications Inc. The partnership widens ABS-CBN’s cable footprint in the Eastern part of Canada which includes Ontario, New Brunswick and selected areas in Quebec.

According to ABS-CBN Canada country manager Marco Amoranto, “Rogers and ABS-CBN have complementary strengths that we can harness with this partnership. Rogers allows us to bring more Filipinos closer to home through the homegrown news and entertainment programs of TFC. With TFC, Rogers’ multicultural offerings have become more varied.” On its 16th year, TFC remains the leading 24-hour Filipino channel in the world, offering a wide variety of top-rating programs that appeal strongly to its viewers worldwide.