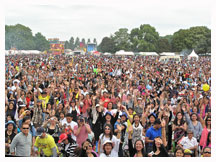 The Filipino ChannelContinuing its 15-year tradition of honoring successful Pinoys, The Filipino Channel (TFC) once again made its presence felt at the Philippine Centre’s “Barrio Fiesta sa London”. Commended by advertisers, Filipino community leaders and foreign attendees for mounting “the most organized Barrio Fiesta in history”, TFC thanks the tens of thousands who came all the way to the Lampton Park, Hounslow last July 17 and 18, 2010 to attend the much anticipated annual event.

In the 26-year history of “Barrio Fiesta sa London”, this year’s celebration was the biggest one to date. Advertisers were all praises for the highly successful event, with some of them already expressing their intention to reserve stalls for the following year. Filipinos from all over Europe as well as their families of different nationalities expressed their appreciation for the joy they felt and confidence that TFC brought back to a Filipino event such as “Barrio Fiesta sa London”. TFC subscribers, in particular, are thankful for TFC’s presence in Europe, on-air and on-ground. Their homesickness faded away within those two days and every time they come home to watch TFC.

As a pioneer in mounting Filipino events worldwide, TFC has once again succeeded in serving, connecting and instilling national pride among Filipinos in Europe. According to ABS-CBN Europe and Middle East Managing Director, Mr. Edgardo Garcia, “We at TFC are very grateful to the Filipino communities in the United Kingdom and all over Europe for the overwhelming response you’ve given.” Now more than ever, the men and women behind TFC are inspired to further enhance the products and services they offer in the service of the Filipino worldwide.